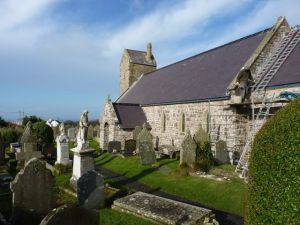 Rhossili, St Mary's Church
St Mary's was built around 1200 to replace a church buried by sand, and retains a Norman doorway, beautiful stained glass windows, and a medieval leper's window.

The first church at Rhossili was dedicated to St Sulien and built at the base of Rhossili Down sometime in the 6th century. St Cynwal later established a monastery nearby.

The Celtic church was rebuilt by the Normans around 1150, but a destructive storm buried the area beneath a huge blanket of sand. Bits of ruined walls can be seen beside the path to the beach. A new church was built in the last few years of the 12th century, in a clifftop location that would protect it from the effects of storm and sand.

The Norman lord William de Turberville granted the church to the Knights Hospitaller of St John. When the Order was dissolved by Henry VIII at the Reformation the right to appoint rectors passed to the crown. The most interesting feature to survive from the early church is the Norman doorway, decorated with dogtooth moulding and chevrons; a pattern not usually seen in Wales. Carved onto the left-hand pillar is a scratch dial.

The arch itself may have belonged to the older sand-engulfed church. It seems as if one of the original archway stones was lost in the rebuilding process, so the doorway has a peculiar lopsided look. The church was heavily restored in the 19th century, and as a result, much of the medieval interest has been swept away.

One feature to remain is a 14th-century squint n the south side of the chancel. The squint is a small slit window to help lepers - who were not allowed inside the church - to attend Mass from outside. The distinctive saddleback tower was a local landmark, used by ships along the coast. The tower used to have 2 bells, at least one of which dated to the 14th century.

The bell was inscribed to St Tellant, which is a mystery because no such saint exists. A probable explanation is that the dedication was made by an illiterate engraver, and was supposed to be to St Teilo. One of the bells eventually cracked and was made into a safe.

There is a touching memorial to Petty Officer Edgar Evans, who accompanied Captain Scott on the ill-fated 1912 polar expedition. Evans was born in Ship Cottage in Rhossili (later converted into a pub). He reached the Pole with Scott but died on the return journey. The memorial was erected by his wife Lois.

A late 18th-century sundial made of Welsh slate stands on a pillar near the gate to the churchyard.