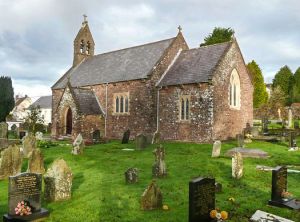 Reynoldston, St George Church
St George's is an attractive 19th century church built on the foundations of a 13th century building that had become decrepit. Inside the church is a 9th century Celtic pillar cross and a Norman font.
History
There has been a church at Reynoldston since the 13th century, but the current building is almost entirely a product of a Victorian rebuilding from 1867. The Victorian work swept away most of the medieval features of st George's church, except for some stonework in the south wall of the chancel, and the Norman font. The result is an extremely good example of Gothic Revival architecture, with excellent 19th century stained glass by William Miller and the John Hardman company. Some of the best glass is in the west window, designed in 1905 by Nathaniel Westlake.

One of the most interesting interior features is the Norman font from the first church on the site, carved from a single block of stalagmite quarried from a local cave. The church has two bells in its small bellcote over the west gable. The oldest of the bells dates to 1783.

The Pillar Cross
Around the year 1800 a local farmer named John Lucas discovered an ancient carved stone on his land. He erected the stone like a grave marker atop a mound where he had buried his favourite horse. Mr Lucas was buried in the churchyard, and 'his' stone followed in time. In 1977 the stone was moved inside the church to protect it from weathering. The stone has traditional Celtic designs carved on one side, while the other shows an incised cross of roughly equal arms. 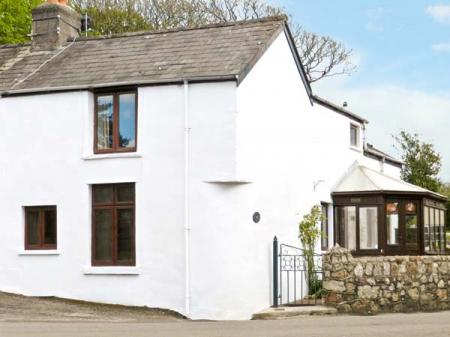 Sleeping up to six people, this semi-detached cottage is in the village of Reynoldston, 12 miles from Swansea.
Sleeps 6