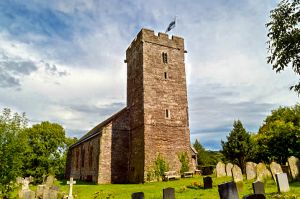 Llanvihangel Crucorney, St Michael and All Angels Church
St Michael's is a 12th century church, much restored in the Victorian period. Highlights include a Norman font, a 15th century churchyard cross, 16th century porch, and a wealth of carved corbel heads.
History
This attractive medieval church probably has its origins in the 12th century. The west wall of the nave shows signs of Norman stonework, but the tower and chancel probably date to the 13th-14th century. Some time in the 16th century the tower was heightened and the porch added. The church was extensively restored in 1884, and as a result many of the medieval features are obscured by Victorian restoration and furnishings.

The wagon roof of the chancel dates to 1887, and the pews, chancel arch, and east window all date from the same period. The church is supported on a fascinating set of stone corbels, carved with likenesses of animals, flowers, and crops. Look for the corbel depicting an otter with a fish. A corbel in the nave depicts the arms of the Beaufort family. Look for likenesses of a hawk, owl, and a nest of chicks in the organ chamber. The 16th century porch has an ornately vaulted wagon roof with decorated bosses in the shape of roses and fleur-de-lys.

Probably the most impressive historic feature inside the church is an ornate memorial to Richard Sidnee, who died in 1667. In the nave is a very worn Elizabethan grave slab, brought inside the church to protect it from further weathering. Another interesting memorial of red granite stands outside, in the angle of the porch and nave, commemorating Revd Price (d. 1875).

Under the east window of the Lady Chapel is a medieval stone altar, discovered buried in the south aisle. You can make out 5 consecration crosses carved into the altar surface. Under the altar is a memorial to Philip Stead (d. 1723), and set into the south aisle is the stone lid of a child's coffin. Inside the south doorway is the original Norman font, which was discovered in the rectory garden and returned to the church.

Interesting stained glass includes a memorial window to Lieutenant Trower, who died in the South African wars, and the west window, dedicated to General EH Somerset, related to the powerful Beaufort family (d. 1886).

In the churchyard stands a 15th century preaching cross on a stepped plinth. The cross shaft is missing its top, but you can make out carved decorations, including ball-flowers.

The church is designated Grade II for its surviving medieval features, especially the west tower.

More self catering near Llanvihangel Crucorney, St Michael and All Angels Church >>

More bed and breakfasts near Llanvihangel Crucorney, St Michael and All Angels Church >>