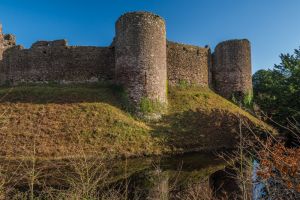 Pear-shaped and secluded, 12th century White Castle, originally named Llantilio Castle, is an attractive moated castle. The first defences may have been the work of Henry II, but remodelling occurred in the latter part of the 13th century. The outer bailey defences are largely intact.

The first fortification at White Castle was a timber and earthwork fortification thrown up by the Normans shortly after the Conquest to guard the main route between Hereford and south Wales. The castle was originally known as Llantilio Castle, as it formed part of the manor of Llantilio Crossenny. The moniker 'White Castle' did not appear until the 13th century, and referred to the colour of the whitewashed stone walls.

Two other castles erected at the same time - and for the same purpose - still stand at Grosmont and Skenfrith. Together the 3 fortresses, standing within 6 miles of each other in the Monnow Valley, are known as The Three Castles. For most of their history the Three Castles were under the same lordship.

We do not know for certain who began White Castle, but it may have been William fitz Osbern, named Earl of Hereford by William the Conqueror. Fitz Osbern held castles at Chepstow and Monmouth, and was the first Norman lord to control large areas of Monmouthshire. Fitz Osbern's son Roger de Breteuil rebelled against the king, and William seized the Three Castles. King Stephen and gave them to 3 separate supporters. King Stephen brought the castles back into one lordship in 1137. 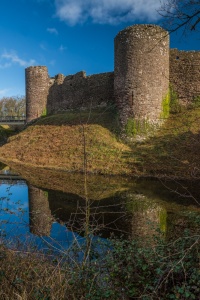 The castle reflected in the moat

Fitz Osbern's castle was a simple timber structure with earthwork defences. Ralph of Grosmont, the king's supervisor of building work for the Hereford area, erected a stone curtain wall in the late 12th century.

In 1201 King John gave the lordship to Hubert de Burgh, who had spent several years fighting France. De Burgh was influenced by the French castles he had seen on campaign, and from 1229 he built 4 large round towers in the inner ward, two combined to create an imposing gatehouse. In 1234 he built a pair of large D-shaped towers and extended the outer ward.

In the 12th century the castle was rebuilt in stone with a square keep surrounded by a curtain wall. The distinctive white-toned stone used in construction gave the castle its name. Further strengthening of the defences took place in the 13th century in response to the threat posed by Llewelyn ap Gruffudd. The result of this 13th century work is the castle we see today; an essentially square layout defended by a large twin-towered gatehouse and four D-shaped towers.

Unlike its neighbours at Grosmont and Skenfrith, White Castle never had lordly accommodation, suggesting that it was intended purely as a defensive structure to be manned by a military garrison.

After de Burgh's death the castle reverted to the crown, and in 1254 Henry III gave them to his son and heir, Prince Edward (later Edward I). The Three Castles were later given to Edward's younger brother, Edmund, Earl of Lancaster, and passed down through the Earls, and later the Dukes, of Lancaster until 1825. 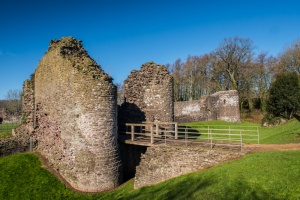 The gatehouse to the outer ward

From the mid-16th century the castle was left to decay, and came into state care in 1922. It is now in the hands of Cadw, Welsh Heritage.

The north side curtain wall connects six round towers, two of which form a gatehouse. There is a large walled inner ward with towers, and a wooden bridge leads over the water-filled moat.

It mystifies me that White Castle is not better known; it seems an almost idyllic representation of a moated medieval castle. True, the interior remains are scanty, but the moated site, with its largely intact curtain walls and corner towers, is a wonderful example of a 12th and 13th century castle, set in lovely countryside.

The site is surrounded by a metal fence, which also blocks access to the rear of the moat. The last time we visited the Cadw ticket kiosk was closed and apparently no longer in use, so we were able to come and go as we pleased. There is a small parking area outside the gates and the site is well signposted from nearby roads. Be aware that the lane leading to the castle is extremely narrow, with a few passing places, so if coming by car please drive carefully. The long distance Offa's Dike Trail leads directly past the site. 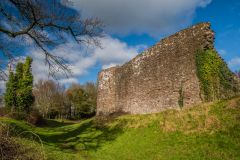 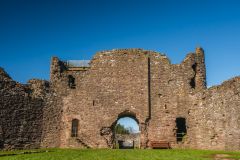 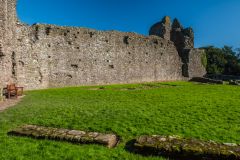 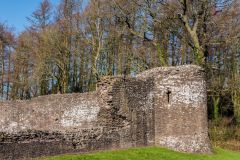 More self catering near White Castle >>