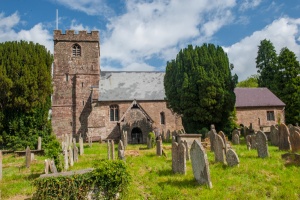 St Clydog's church is dedicated to a 6th-century king of Ewias named Clydawg or Clydog who was martyred around the year 500AD. The church dates to the 12th century and stands at the traditional site of St Clydog's tomb.

Clydawg was the son of Cledwyn of Ewias and the grandson of King Brychan of Brecon. Both Clydawg and his brother Dedwy were heavily influenced by their cousin Cadoc, and spent time at Cadoc's monastery in Llancarfan.

In time Cledwyn died and Clydawg became king. He became betrothed to be married, but a pagan rival to the hand of the lady murdered the king in a fit of jealousy. His body was transported to his intended burial site, but the oxen pulling the cart refused to cross the Monnow.

Clydawg was buried by the river bank, but in the night watchers saw flames issue from the grave. As a result, the Bishop ordered an oratory to be built over the grave site, and later a small church of timber was erected. The church was eventually replaced by a stronger building of stone, and this is thought to lie beneath the current chancel. 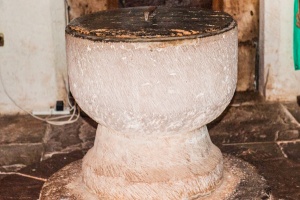 Clydawg was considered a martyr his grave became a destination for pilgrims, and his former subjects of Ewias would come to pray at his shrine. A village grew up around the church, and over time the name was transformed into its current form, Clodock.

The parish was under the Welsh church until 1858 when it was transferred to the English diocese of Hereford, though most of the inhabitants spoke Welsh until the last century.

For centuries the church was under the control of the powerful de Lacy family, whose castle at Longtown stands about a mile to the north. Later the living transferred to the monks of Llanthony Priory, and monks from Llanthony served as parish priests for over 2 centuries.

Like most churches in the Welsh Marshes, St Clydog's has a strong west tower, built in equal parts for defense and as a bell tower. The tower in its current form dates to the 15th century, but the main body of the church is 12th and 13th century. The interior was heavily restored in the 17th century and as a result contains a surprising mix of Jacobean and medieval features. 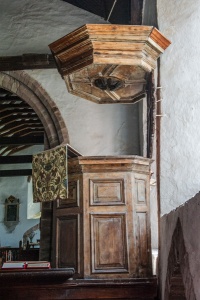 Jacobean pulpit and
sounding board

The church is accessed through a south door dating to the 16th century. The battered doorway has a medieval sanctuary ring, probably a survivor from a previous door. If a fugitive from the law could reach the ring they could claim right of refuge and stay safe from seizure for an indefinite period.

The interior features a superb 17th-century three-level pulpit with a sounding board, and box pews of a similar age. Many pews show carved symbols and initials of the families that used them. The west gallery was built around 1700 for the village orchestra and choir. There are traces of wall paintings still visible, most notably an early 15th century image of the Virgin Mary in a deep window splay by the pulpit.

At the west end of the nave are three wooden chests. The oldest is 13th century and is made from a single oak log. The lid is missing, suggesting that marauding Scots broke into the chest when they occupied the valley in 1645. If true, the Scots must have stolen the church plate within, for the oldest existing plate dates to 1732.

The second chest is a relative youngster by comparison and dates to 1695. The third chest came from St Peter's Church at Longtown Castle (once a chapel of ease for Clodock, but now a private residence).

Under the overhang of the west gallery is a large tub font, dating to about 1280. The font is topped by a 17th cover of oak planks. On the north wall is a royal coat of arms of George I. 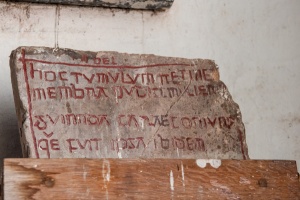 Mounted on the wall east of the pulpit is a real historical treasure, a 9th-century gravestone with a Latin inscription. The words translate as 'This tomb holds the remains of the faithful and dear wife of Guinnidas, who was herself a native of this place.' Inscribed stones of this type were often placed in tombs from the 9th to the 12th centuries. This particular example was found in 1917 under the nave.

The communion table, rails, and bench date from the reforms of Archbishop Laud around 1650. The choir stalls lining the chancel date from the late 17th century, with some modern additions. There are two Norman lancet windows in the north nave wall, and a mix of Early English, Decorated Gothic, and Perpendicular windows in the south wall. 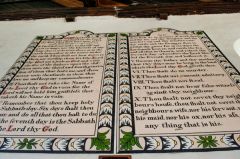 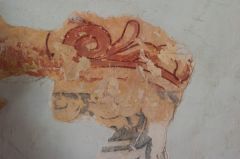 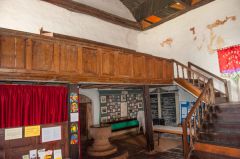 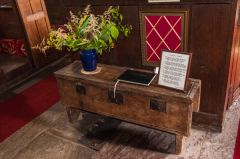 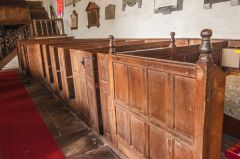 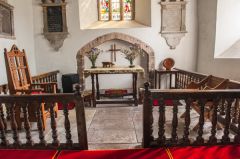 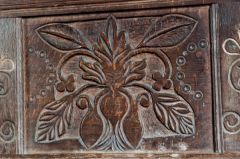 More self catering near Clodock

More bed and breakfasts near Clodock