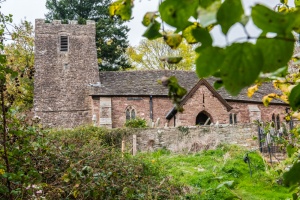 St Martin's church in the Monmouthshire hamlet of Cwmyoy has been called the 'crookedest church in Britain'. This intriguing medieval building was erected on a sloping site that suffers from subsidence due to an ancient landslide, and over time the walls, the roofs, and noticeably, the tower, have gone wildly out of alignment. None of the walls stand straight, and none meet at right angles. The west end of the church slants one way, the east end slants the other way.

The tower slants at an alarming angle that makes the leaning tower of Pisa look like an advertisement for architectural perfection. Pisa is 4.7 degrees out of alignment, while the tower of St Martin's leans at 5.2 degrees (just over 6 feet out of true).

Thankfully, buttresses added in the 1960s should limit any further tilting, with the help of metal rods inserted into the walls. If you stand under the tower you can see that the tower arch tilts dramatically to the north, while the chancel arch and east window tilt just as markedly to the south. 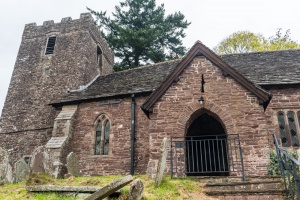 The south front and leaning tower

Very little is known about the origins of the church at Cwmyoy. It seems very likely there was a church here before the Norman Conquest, and St Martin's stood on the old pilgrim's route to St David's in Pembrokeshire. Today the church welcomes a different sort of visitor, for it stands on the Cistercian Way long-distance trail.

The De Lacy family became lords of the manor after the Norman invasion. In AD 1100 William de Lacy founded a priory at nearby Llanthony. William's son, Hugh de Lacy, gave the new priory the manor and church at Cwmyoy. Monks from Llanthony Priory served the church at Cwmyoy, but after the priory was dissolved in 1538 the manor was granted to Sir Nicholas Arnold, Lord Chief Justice for Ireland.

As for the church building, it dates primarily from the 13th-16 centuries. The original 13th-century roof is still intact - goodness knows how, given the building's contortions over time.

The walls are lined with a fascinating array of memorials, many of them carved by the Brute family of masons. The Brutes were prolific throughout the 18th and early 19th centuries, and their memorials adorn numerous churches in the Black Mountains. Their memorials are characterised by depictions of cherubs and baskets of flowers. 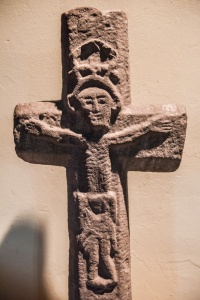 The 13th century
Christ on the Cross

The most interesting historical feature is a small 13th-century stone figure of Christ on the Cross. One unusual feature is that Christ is shown with a mitred cap with three crosses. The unusual headgear is similar to some Irish crosses, and may have been derived from the Holy Roman Empire. The cross was dug up in the garden of a nearby farm in 1861. It was stolen from the church in 1967, but discovered in a London antique shop and returned to Cwmyoy church.

Inside the south door is a very plain early medieval font, and there are several beautifully carved memorials set onto the walls of the porch.

The church is usually open to visitors. It does take some getting to, for Cwmyoy is located on very narrow, winding lanes. As you navigate those lanes, it seems as if you are going back in time, delving deeper into the past of this incredibly scenic and deliciously remote area. There is no obvious parking place, but I managed to find a place where the verge was wide enough to park. I highly recommend seeing Cwmyoy as part of a visit to Llanthony Priory just a few miles north. 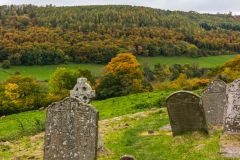 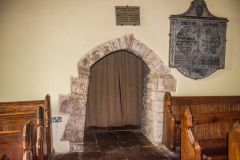 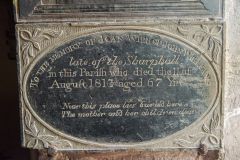 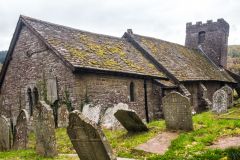