HERITAGE HIGHLIGHTS:   In the churchyard is a 5,000 year old yew tree 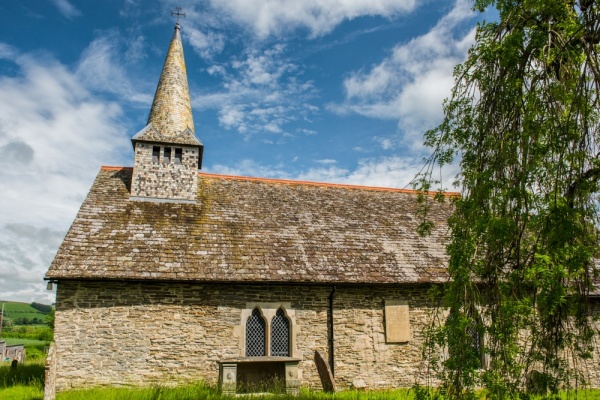 The tiny hamlet of Discoed, near Presteigne, is known for the ancient yew tree beside the parish church of St Michael. The church we see today is the result of a comprehensive Victorian restoration but it incorporates much, much older stonework from the original building on this spot.

Beside the churchyard is a grassy mound thought to be the remains of a Norman castle motte and directly behind the church is a beautiful 16th-century timber-framed house. The setting is idyllic and redolent with a sense of antiquity.

North of the church stands a huge yew tree, some 35 feet in circumference. The yew is thought to be roughly 5,000 years old (that is not a misprint; it really does mean it dates to about 3,000 BC). There is a smaller female yew tree in the south-west corner of the churchyard, ancient in its own right but as relative sapling compared to the ancient yew.

The combination of the yew trees, the circular shape of the churchyard, and a well-spring just outside the churchyard gate suggest that the church was established in the 5th or 6th century. It is possible that the site was a pagan sacred site before the first Celtic hermit settled here. 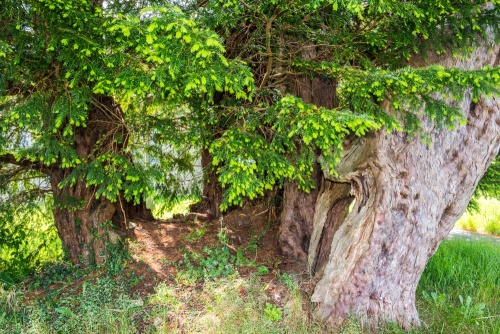 If the church was established in the Celtic period the name 'Discoed' was not. Though its present form is Welsh, the name first appeared in the16th century. The original name was Dytchecot, or Dishcot, from the Saxon words for 'a cottage by the dyke'.

The dyke was Offa's Dyke, the enormous earthwork erected by King Offa of Mercia in the late 8th century. The 'cottage' in question was built by one of the Magonsaetan, Mercian settlers from the east, or English side of the dyke.

Discoed was mentioned in the Domesday Book of 1086 when it was described as 'waste lands' owned by a Norman knight named Osbern, of Richard's Castle. Osbern may have erected the castle motte outside the churchyard.

The first record of a church comes in 1291 when the manor of Discoed was in the hands of the powerful Mortimer family of Wigmore. They gave the church to Wigmore Abbey, and the abbey, in turn, declared that Discoed would be served by clergy from nearby Presteigne or Norton.

Apparently the rector of Norton failed to maintain the church in Discoed, causing the residents to complain to the Bishop of Hereford. St Michael's was briefly annexed by Norton but by the early Tudor period it was a chapel of ease to St Andrew's Church in Presteigne. That arrangement continues today, nearly 500 years later. 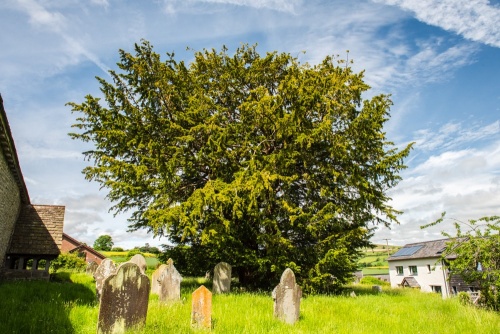 Another look at the ancient yew tree

That arrangement was not always without friction. In the Commonwealth period, the vicar of Presteigne was a strict Puritan named Richard Lucas. It seems that the townsfolk of Presteigne were not happy with Lucas so they had him transferred to Discoed, much to the dismay of the Discoed parishioners.

Life must have improved by 1719 when a church report proudly declared that there were 'no fornicators, adulters or dissenters among us'.

Until 1839 the village was home to an annual festival known as the Discoed Wakes, held on the Sunday following Michaelmas when a barrel of beer was on set up outside the churchyard gates. The Wakes gained a reputation for riotous revelry and drunken behaviour.

The church was completely restored in 1869 by the gentleman architect Henry Curzon. The restoration swept away most of the medieval furnishings, but the new church was built upon the foundations of the old and you can see the medieval stonework in several places, particularly in the north and south walls.

Curzon's church was very much in the Early English style that evolved in the 13th century. Rather than a tower, the church features a small timber belfry housing a single bell, cast in 1675 and bearing the inscription, 'God Save the King'. 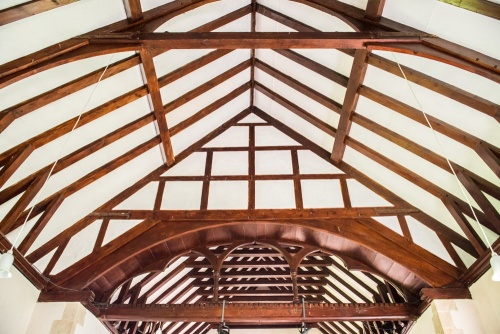 The timber roof and chancel arch

The most interesting feature of the Victorian church is the chancel arch, made of timbers rather than stone. On the nave wall is a marble monument to John Bodenham of The Grove (d 1809).

The chancel boasts a 17th-century communion table. To the south of the table are wall monuments to the Taylor family, who lived for 200 years at the timber-framed Upper Hall behind the church. The direct family line ended when the last heir died in 1814 at Trincomalee in Sri Lanka.

Discoed Church is a delight to explore. The setting is idyllic, and the ancient yew is a remarkable specimen. Look for the well-spring just outside the churchyard and the remains of the Norman castle motte on the lane leading to the church. 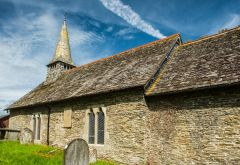 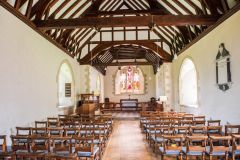 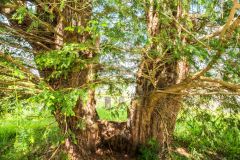