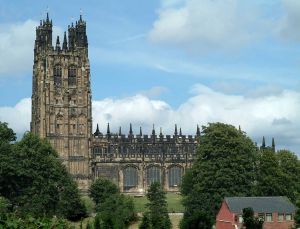 Wrexham, St Giles Church
St Giles church, Wrexham, is one of the "Seven Wonders of Wales", noted for its 136-ft high three-stage tower (1506) with four corner turrets and minor pinnacles with sculpted figures of saints.
History
The earliest church on this site was built in the 11th century, but in the late 15th century it was completely rebuilt, possibly under the patronage of the powerful and wealthy Lady Margaret Beaufort, mother of Henry Tudor, Earl of Richmond (Henry VII). Tudor symbols abound, with the Tudor rose and portcullis appearing on the exterior and interior of the building.

Elihu Yale
The superb tower was begun in 1506 and completed in 1525, and is an easily recognised local landmark, with its profusion of spirelets and carved details. To the west of the tower is a table tomb to Elihu Yale, founder of Yale University in America. Yale is said to have given the money for the chancel gates inside the church in 1707. He also provided money for a painting of St David on the north wall of the ante-nave.

On the east wall is a 16th century wall painting depicting the Doom, or Day of Judgement. In the nave are some beautifully carved medieval corbels, including the 14th century of a mermaid combing her hair. There is a royal coat of arms to Queen Anne, and a 1524 brass eagle lectern, one of only 40 in Britain to survive the religious upheaval of the Reformation.

The font is at least late medieval, if not earlier. It was lost in the 17th century and only discovered again in 1843. There are several interesting historic memorials, including the medieval effigy of a Welsh knight in armour, and the tomb of Mary Myddleton, daughter of Sir Richard Myddleton of Chirk Castle, who died in 1747.

The churchyard is entered through 18th century wrought iron gates crafted by Robert Davies of Croesfoel. The Davies brothers were famous smiths, creating gates for Chirk Castle and the royal home of Sandringham House in Norfolk. The gates were created in 1719-20, but moved to their current location a century later.

But the rhyme is mistaken; Wrexham's church does not have a steeple! It has a tower, and a very impressive one at that. 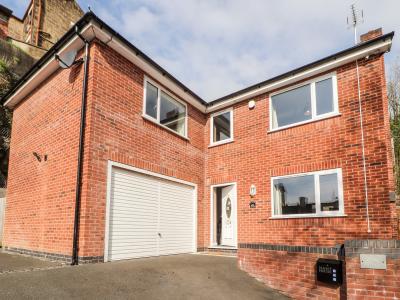