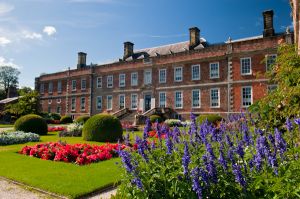 Erddig House
Erddig was built in the 1680's, then heavily remodelled in the early 18th century. The interiors showcase fine furniture, tapestries, and porcelain, plus a fascinating array of portraits of family servants with poems about their lives penned by the house owners.

Though the history of the house goes back much further, Erddig is primarily an early 18th century house. John Mellor, a successful London lawyer, bought the property in 1714 after its previous owner went bankrupt. Mellor then enlarged the existing house, creating a long red brick facade by adding wings to either side of a central block. Each room led straight into the next, and the doors of each room lined up, so that if they were all opened you could look straight through the entire set of rooms from one end to the other.

The interiors he kept fairly subdued, for his pride was a collection of fine furniture, tapestry, and porcelain, and it is this collection that fills the state rooms today, for almost all of Mellor's original interiors are intact. If he walked through the front doors of Erddig today he would feel right at home! 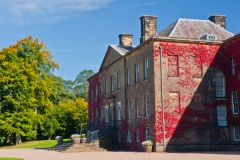 The front entrance of the house

Mellor was followed by his nephew, Simon Yorke, and for the next 240 years Erddig was owned by Yorkes named Simon or Philip.

Philip Yorke remodelled the main house frontage around 1770, with input from James Wyatt. In 1826 Simon Yorke installed the elegant dining room in neo-classical style. A later Philip Yorke suffered through a celebrated split from his wife. She left him after only a few months of marriage. When she eventually died, Philip, now aged over 50, made a habit of inviting suitable ladies to Erddig, and when they left, giving them a small package tied with a ribbon. Inside the package was a proposal of marriage. He made a better show of his ultimately successful proposal, choosing Valentine's Day to offer marriage a clergyman's daughter, who accepted him. 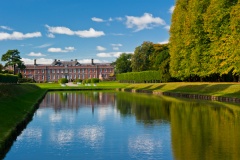 But it is not the staterooms and their fine furnishings that are the real treasure at Erddig. For the family did something remarkable; they created a record of the domestic servants who worked and lived in the great house and on the estate.

Through paintings, printed documents, even poems, they created an unmatched record of domestic life in a stately home. So we can see, not nameless servants, but the individual people who served at Erdigg, who they were, and how they lived.

The family started a tradition of having portraits painted of all the principal servants. Each portrait is painted with a verse about the subject, composed by the master of the house at the time. After the advent of photography the Yorke owners replaced painted portraits with photographs of their servants, and composed verses separately to accompany the photos.

Ten of the portraits hang in the Servant's Hall. Seven are by artist Jon Walters of Denbigh, painted between 1791 and 1793 for Philip Yorke I. Among the servants represented are a game-keeper, blacksmith, and housemaid. A new series of 3 portraits were commissioned by Simon Yorke II in 1830 and painted by William Jones. These include likenesses and verses about a gardener, carpenter, and woodman. 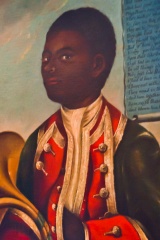 Among the most famous records of servants at Erddig is a painting of a young black servant, thought to be a coachboy to John Mellor, which would have made the portrait early 18th century. This painting is now thought to be much later, probably from the late 18th century.

The formal gardens at Erddig are a delight. There are lovely topiary hedges near the house, and a long canal leading your eye out across the estate.

The first gardens were designed by Joshua Edisbury (1685-1709), who created a terraced walk with a banqueting house at one end and a summer house at the other. John Mellor added a canal and pond, and walks through a pleasure ground. Mellor's heirs further developed the pleasure ground, adding features like a dairy house, ice-house, and cascade. In the 19th century, fountains and flower beds were added in the formal gardens, and large numbers of conifers planted in the woodland.

The result is a wonderful mix of formal and informal garden areas, stretching out over a very large estate. The showpiece is probably the canal and the parterre near the house, which serve to set off the elegant neo-classical facade of the main house.

I was so impressed with Erddig. The interiors are simply stunning, with wonderful staterooms, Chinese wallpaper and tapestries. Then there are the servant's quarters, full of fascinating personal histories of the people who lived and worked here. You really do get a feeling for the close bond between the Yorke family and the servants they employed. The gardens were an absolute delight as well, with a lovely walk beside the canal and wonderful vistas across the surrounding parkland. Erddig is a delight to visit. 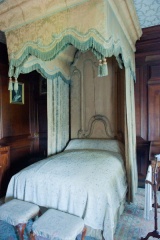 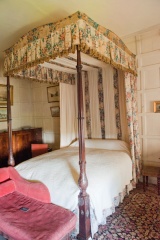 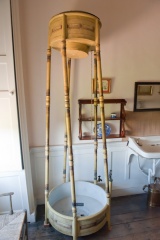 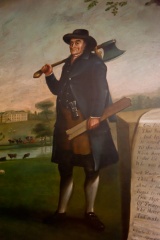 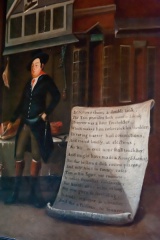 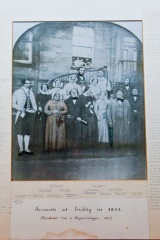 Photograph of servants
at Erddig, 1852
THE GARDENS 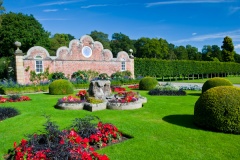 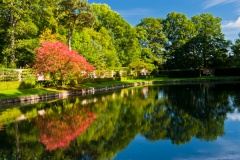 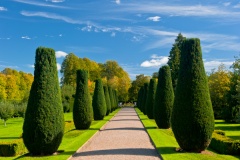 Garden: Restored formal 18th century gardens surrounding a country house. A large walled garden has been planted with authentic varieties of fruit trees and shrubs, and there is a long canal garden. Later additions are the Victorian flower garden, parterre, and walks. The national ivy collection is housed here, as well as a large collection of narcissus. Parties may arrange a private tour led by the head gardener. Best viewed in: Spring.

More self catering near Erddig House >>