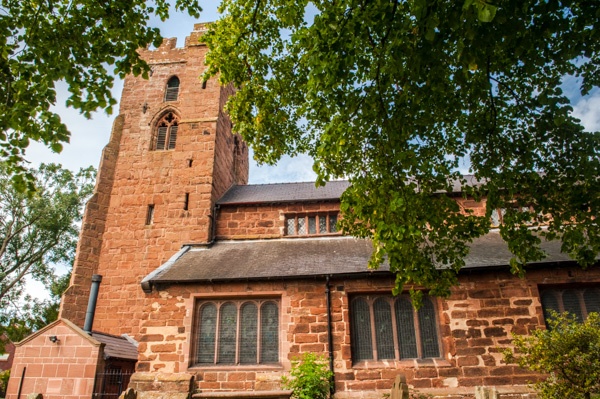 It seems likely that there was a church at Farndon in the Saxon period, and we know that one existed at the time of the Domesday Book in 1086. The earliest part of the current building, however, dates to the 14th century.

St Chad's suffered during the Civil War when a troop of Parliamentary soldiers under Sir William Brereton used it as a barracks. Royalist soldiers launched an attack on the church in 1643, and it caught fire in the turmoil. Despite the heavy damage, Parliament continued to use the church as a base until 1645, but after that it was simply left to decay.

But like a phoenix rising from the ashes, St Chad's was reborn when William Barnston had the entire structure was rebuilt in 1658.

A reminder of the turbulent Civil War events can be found in the Barnston Chapel, where a Civil War window has panels of painted glass depicting Cheshire Royalists. Also in the chapel are memorials to Barnston family members.

The most interesting historical feature is a 14th-century effigy of a knight. This is thought to be Sir Patrick de Barton, presumably from Barton hamlet, a few miles away from Farndon. Very little is known about Sir Patrick, save that he fought for Queen Philippa at the Battle of Neville's Cross in 1346.

He is shown wearing a surcoat over armour, his feet resting on a small dog and his head on a cushion. He bears a sword in his right hand and a shield in his left. The simple Latin inscription reads 'Here lies Patrick of Barton. Pray for him'.

It is remarkable that the effigy has survived; it was one of three similar effigies of knights discovered buried near the chancel during church repairs in 1800. The other two effigies were ground into sand and sold, but for some reason, the Barton effigy was spared. 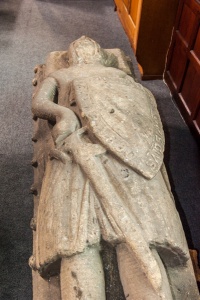 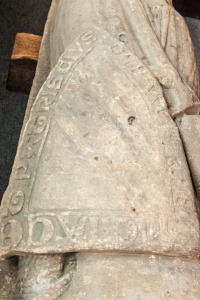 This intriguing window has four rows of 17th century painted glass with four very large panes in the centre. There are rows of Royalist soldiers and weapons, at first glance all appears random and a jumble of symbolic images, but actually several of the images are of specific soldiers from the area who fought for the king.

Among those soldiers depicted is Sir William Mainwaring, who died at the siege of Chester, and another is Sir Francis Camul of Buerton, who attended Charles I at Chester.

The bottom row shows pikemen, musketeers, and military musicians. The centre four panels show the spoils of war, with piles of armour, weapons, and a large military drum. As a whole, the window offers a fascinating glimpse into the Civil War period and the people who fought for the Royalist cause. 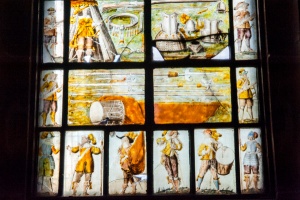 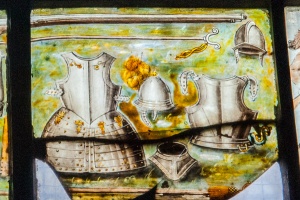 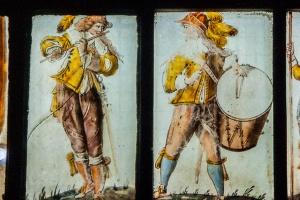 Other interesting historical features include an 18th century oak chest in the north aisle. There are two tables of benefactors; one dated 1679 in the north aisle and a second dated 1768 in the tower. Outside in the churchyard is an ancient yew tree. Brereton's soldiers are said to have rested their pikes and swords against the yew trunk before entering the church. It is hard to imagine such tumultuous times when you see the peaceful churchyard today!

There is one final bit of interesting history related to Farndon church; the famous Stuart cartographer John Speed was born in the village to the local tailor. For 5 decades he followed his father's trade, but he would frequently climb to the top of the church tower to study the surrounding landscape.

Eventually, his passion for mapping the land prompted him to leave Farndon for London, where, with the patronage of Sir Fulke Greville, he became famous as a mapmaker and historian. 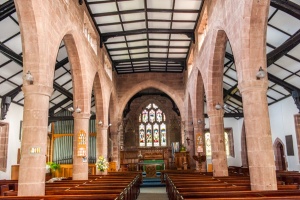 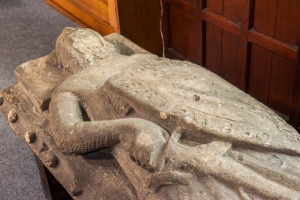 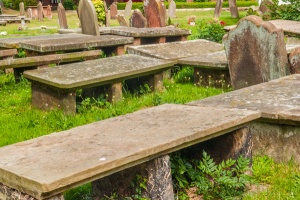 18th-century table tombs in the churchyard

More self catering near Farndon

More bed and breakfasts near Farndon

Self Catering near Farndon