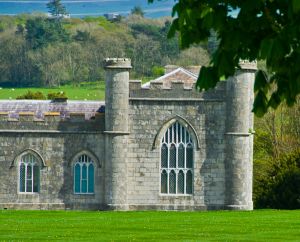 Plas Newydd (not to be confused with the house of the same name at Llangollen), is the family home of the Marquis of Anglesey. The house is an elegant 18th century mansion designed by James Wyatt in a mix of Classical and Gothic styles, built around a 14th century hall.
Inside the house is a massive mural painted by Rex Whistler and an exhibition about his work. The house stands in a glorious position overlooking the Menai Strait, with views to the distant peaks of Snowdonia.

History
Though the house we see today is largely 18th century, the roots of Plas Newydd go back to the 14th century, when the estate was owned by the Griffiths family of Bangor. The Great Hall has survived, with doorways at either end. A pair of striking towers were a later addition.

The estate passed in time to the Bayly family, who later changed their family name to Paget. In the late 18th century James Wyatt was called in by the Pagets to design a fashionable new mansion. Wyatt, perhaps belying his nickname 'Wyatt the Destroyer', kept the towers and the hall, and merged them into an elegant Georgian house, with a broad, sweeping lawn down towards the water. 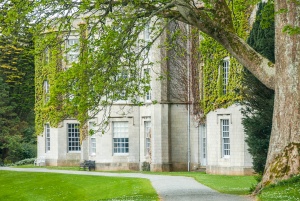 The south facade of the house
Henry Paget fought at the Battle of Waterloo in 1815. He lost a leg in the battle, but his bravery on the field and qualities of leadership made him a national hero, and led to him being named the 1st Marquess of Anglesey. The Marquess was the first person in Britain to use a fully articulated wooden leg, that is, one that bends like a normal leg. There is an exhibition on the Battle, and the Marquess's role, and you can see his artificial leg on display.

In the late 19th century the 5th Marquess converted the chapel to a theatre, and the family would put on regular theatrical performances, with the Marquess often taking the lead male role.

The house today reflects life at Plas Newydd in the 1930s, a decade captured beautifully by the 6th Marquess's home movies of family life, for he was an avid cinematographer. He made the last notable changes to the house, getting rid of his father's theatre and combining three servant's rooms to make the current dining room.

The 6th Marchioness, Margery, was heavily involved in creating the elegant interiors we see today. It was she who called in Rex Whistler to paint the superb mural that is the highlight of a visit to Plas Newydd. Whistler became a firm family friend, and fell in love with the family's eldest daughter Caroline. His death on active service in 1944 seems to have affected the family deeply.

From 1949 Plas Newydd was used as a naval cadet training base. The first cadet school was the HMS Conway, which was moored in the Menai Strait close to the house. In the 1950s some of the cadets lived in the east wing of the mansion, with the old stable block used as classrooms and further accommodation. In 1964 the entire school was moved to purpose built building in the grounds. Though the building still stands, the school closed in 1974. There are exhibits on the history of the school and the cadets who lived and learned at Plas Newydd.

Surrounding the house are superb gardens based on a design by Humphry Repton. Our family really enjoyed a woodland walk above the banks of the Strait to the rhododendron gardens, along trails strewn with colourful blossoms.

The location above the Menai is simply stunning, and the combination of the history of the house, lush interiors, and the wonderful gardens make Plas Newydd a must-see on a visit to Anglesey. 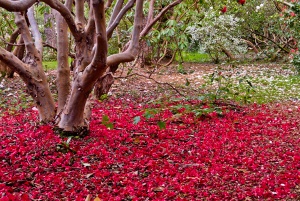 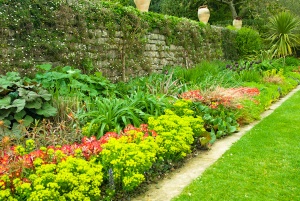 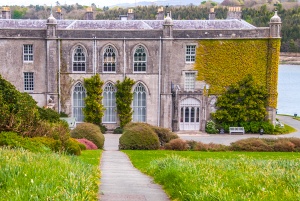 The footpath to the house

Garden: The gardens surround one of the most popular country houses in Wales, the home of the Marquis of Anglesey. Lawns and open parkland are dotted with informal plantings of shrubs, and there is a formal Italianate rose garden by the house. A seasonal rhododendron garden is open in spring. Best viewed in: Spring. 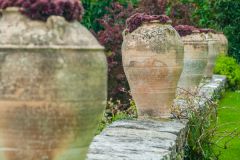 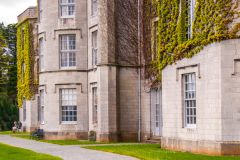 More self catering near Plas Newydd >>