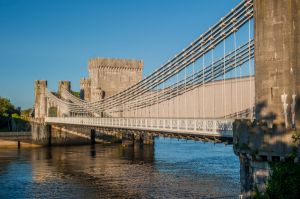 Thomas Telford's iconic bridge linking Conwy to Llandudno, on the northern bank of the River Conwy. The bridge stands under the looming bulk of 13th-century Conwy Castle, built to guard the river mouth. The bridge was built in 1826, and it stands as one of Telford's most enduring monuments.

At the time it was one of the few suspension bridges in the world to carry road traffic. It replaced a long-established ferry across the river. At the south end of the bridge stands a tollhouse, furnished as it would have looked in the 1890s.

Telford's design called for tall turrets modelled to echo the medieval battlements of Conwy Castle. The design is very similar to Telford's other Welsh masterpiece, the Menai Suspension Bridge joining Anglesey to the Welsh mainland. The Conwy bridge runs parallel to a later wrought-iron railroad bridge built by Robert Stephenson.

The bridge is exceedingly narrow, measuring only 2.5 metres across. The cables supporting the south end of the bridge are anchored into the rock on which the castle stands, and some parts of the castle had to be demolished to allow the cables to be anchored.

The bridge can easily be viewed from practically anywhere near the harbour mouth, including wonderful views from the Castle, which overlooks the bridge. The bridge is no longer open to road traffic, so visitors on foot have it all to themselves!

A very short stroll along the riverfront leads you to another National Trust property, Aberconwy House, a 14th-century townhouse, believed to be the oldest surviving townhouse in all of Wales. 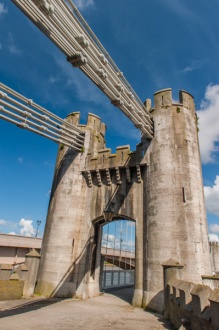 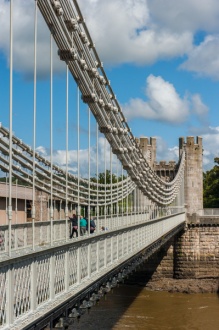 Looking east along the bridge 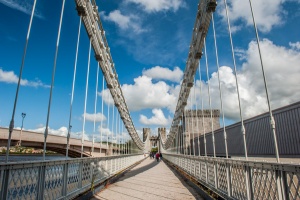 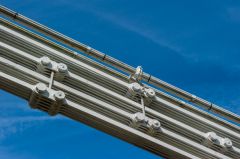 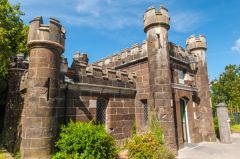 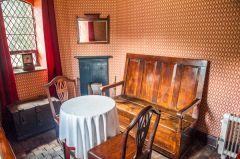 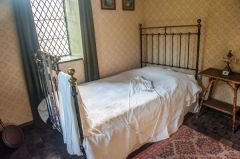 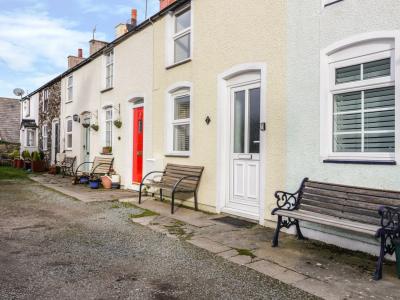 A mid-terrace cottage in the town of Conwy in North Wales, able to sleep four people in two bedrooms.
Sleeps 4 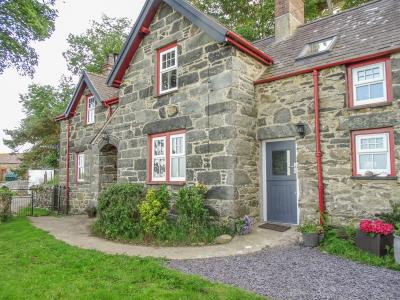 This detached farmhouse resting on the outskirts of Conwy sleeps up to nine people, in five bedrooms.
Sleeps 9