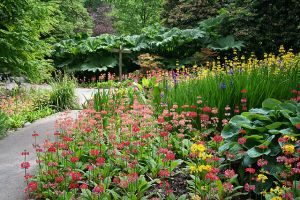 Clyne Gardens
Clyne Gardens is a 50-acre public garden owned by the Swansea City Council. Note the tower, built by Admiral Algernon Vivian, the last private owner of the gardens, to view his rhododendrons. The plants now tower over the tower! A lake and waterfall feed into a bog garden, and the area supports a wide variety of damp-loving plants. Best viewed in: Spring.

In 1860 Glynn Vivian bought Clyne Castle and laid out landscape gardens in the parkland surrounding the house. In 1921 the estate was inherited by Algernon Vivian, 'The Admiral', who was responsible for much of the gardens as we see them today.

The Admiral sponsored several plant-hunting trips abroad, and many of the rhododendrons still bear their original collection number. He also welcomed famous visitors to his gardens, including the Prince of Wales (later Edward VII) and politicians Neville Chamberlain and Stanley Baldwin.

Over 2000 varieties of plants are spread across the garden, but it is for one thing that Clyne is most famous and that is rhododendrons. There are over 800 rhododendrons, and Clyne maintains the National Collection of the species, along with collections of Pieris and Enkianthus.

The damp, cool climate means that Clyne is home to plants not usually seen at this latitude. Among the unusual features is the bog garden, home to American skunk cabbage (the odour is quite something!) and gigantic Elephant Rhubarb.

Admiral Vivian built a gazebo beside the castle so he could watch ships entering Swansea Bay. Hovering protectively over the gazebo are Monterey Pines, which help shelter the site. At the top of the garden is a Japanese Garden, with a picturesque Oriental bridge spanning a stream that gives way to a waterfall.

Among the garden highlights is the tallest Magnolia in Britain. There is a small stand of oak woodland, a remnant of an 11th century Norman forest. Look also for the miniature 'Joy Cottage' at the entrance, built for the Admiral's daughters as a combination schoolroom. Throughout the gardens are memorials to Vivian family dogs.

More self catering near Clyne Gardens >>