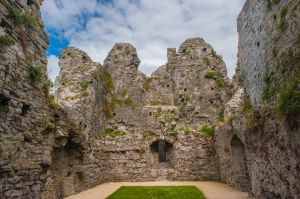 The name Oystermouth has nothing to do with oysters; it is a Norman mangling of the Welsh 'Ystrum Llwynarth'. This early Norman castle on a hilltop has well preserved domestic buildings and a stone keep.

Oystermouth Castle was probably begun around 1100 by William de Londres, who was also responsible for several other early Norman castles in south Wales, including Ogmore. Londres was a follower of Henry Beaumont, Earl of Warwick. When Beaumont was granted Gower by Henry I, he made his seat at Swansea and distributed the rest of his new lands to his supporters, such as De Londres. Just as at Ogmore, the first fortification was a simple ringwork, and just as at Ogmore, the castle was sacked by the Welsh in 1116.

The parallels between Ogmore and Oystermouth do not stop there; just as at Ogmore, William de Londres' son Maurice built a stone keep to replace the earlier wooden fortifications. The castle reverted to the lords of Gower sometime in the late 12th century. 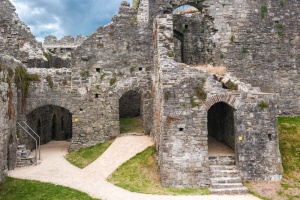 Remains of buildings from this period have been excavated, so that we can guess at how the castle was laid out and what life was like for the inhabitants. There were residences for the lord and his family, soldiers, and servants, kitchens, guardrooms, and storage areas. It seems likely that there was also a courtroom and prison.

We do know that in 1302 William de Langton was held prisoner here. Chambers at the back of the keep are reputed to have whipping posts set into the walls, though it seems equally likely that the projections are no more than architectural braces.

The Welsh took the castle keep in 1215, but it was quickly retaken. It then passed to the de Braose (de Breos) family, lords of Gower. The Welsh attacked again, under Rhys ap Maredudd in 1287, only two or three years after Edward I spent the night here.

The Breos family lived rather interesting lives; in 1298 Alina de Braose, aged 7, married Lord John of Swansea, himself aged but 12. Alina would later be imprisoned in the Tower of London by Edward II.

In 1302 the Braose steward of Oystermouth, John Iweyn, kidnapped William de Langton and cast him into prison. Just 3 years later the 3rd William de Braose was sent to the Tower of London after his mother complained of unpaid debts. The following year Parliament forced Braose to ensure the rights of Swansea burgesses and his tenants in the Gower. 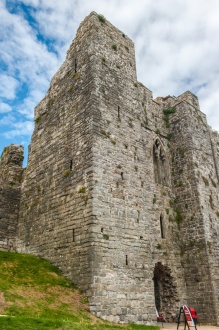 In 1320 John de Mowbray seized Oystermouth Castle to prevent Edward II from selling it to his favourite, Hugh le Despenser the Younger. Edward had his revenge in 1322 when Mowbray was executed for rebellion. After Edward II's ouster, Alina de Braose was freed from the Tower and granted lordship of the Gower by Edward III.

Oystermouth passed through a number of hands until the Mowbray's took control (for the second time) in 1397, by which time it had lost much of its strategic importance. That did not stop Owain Glyndwr from seizing Oystermouth during his 1405 rebellion.

When the Earls of Worcester gained the lordship of Glamorgan in the 16th century they also took control of Oystermouth. The castle was finally owned by the Dukes of Beaufort, and it was they who granted it to Swansea Council in 1927, though they remain titular lords of the manor.

Today the castle is operated by the Friends of Oystermouth Castle and is generally open 11-5pm between Easter and October (please check the official website for the current times). The castle grounds and nearby woodland walks are open all year.

The stone keep erected by Maurice de Londres is the most obvious remaining feature, but there are numerous other buildings added over the early medieval period, including a lovely gatehouse with curtain walls, a 14th-century chapel with fragmentary wall paintings, and several other domestic chambers. The chapel tower boasts some very nice traceried windows. You can climb up to the wall walk for excellent views over the castle and the surrounding park.

It is worth noting that there is extremely limited parking at the castle. By far the best place to park is at one of the paid parking lots on the waterfront. There are several parking areas within a 5-minute walk of the castle. We used a parking area just south of the junction of Newton Road with Mumbles Road (the B4433) at OS SS616881.

Our visit to this castle came after a walk through a busy, busy town, and a much more peaceful park. I almost forgot about the tickets, partly because the ticket office was right in the middle of this labyrinthine fortress.

First stop is the chapel, reached through the shop, up a staircase, and 20 feet above the ground. The floor had been gone some time, and has been replaced by a glass bridge, with offshoots for the major features along the chapel walls. Back in the shop, the finest plastic swords are given pride of place in securely locked glass cases.

Beyond this point, you should keep your magic string ready, and watch out for Minotaurs. The path will not go where you expect it to. I found myself in a corridor, with a spiral staircase rising through the middle, completely enclosed in its tubular walls. Only after ten minutes of searching did I find the entrance to the staircase. Some castles follow a form. Some flout it. Oystermouth is in the third category, random, with a layout that seems to defy any obvious logic.

Only on the outside is it a 'normal' castle. It takes a very sensible shape, a triangle with the end cut off. This gives the face a smaller surface area, and the longer sides are protected by the shape of the ground. The sides would be weak to artillery, but not much else. They rise to an amazing height, or so it seems from the top. The crenellation, interestingly, is preserved under a blanket of turf.

In short: a great castle. Make sure you get a copy of the visitor brochure with a map of the site! 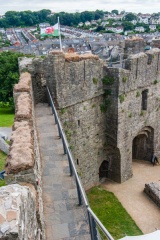 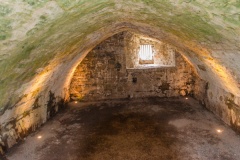 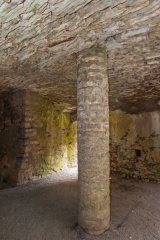 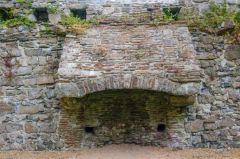 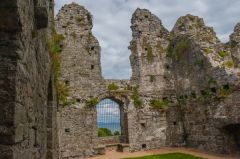 More self catering near Oystermouth Castle >>

The Mumbles (Self catering) 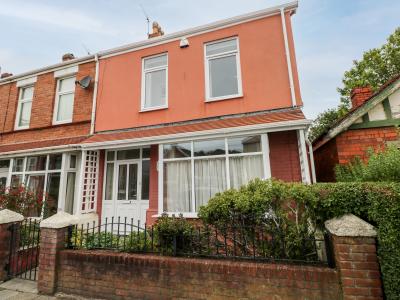 This phenomenal semi-detached, three-storey house rests in The Mumbles, Swansea and can sleep seven people in three bedrooms.
Sleeps 7

More cottages in The Mumbles >>