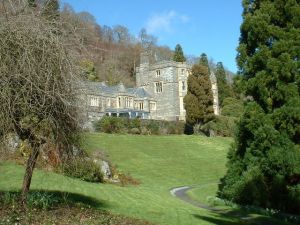 Plas Tan y Bwlch has been the home of some of north Wales' most wealthy families for centuries. The history of the estate goes back to at least the 16th century when Ieuan ap Iorwerth ap Adda began acquiring land near Ffestiniog. The family claimed descent from Collwyn ap Tangno, one of the legendary 12 Tribes of Gwynedd.

The first written record of the estate comes in 1602 in the will of Robert Evans. Robert's grandson Evan became Sheriff of Meirioneth in 1634, and was probably responsible for building the first house here. In the 18th century the house passed by marriage to the Griffith family, and in 1748 Robert Griffith rebuilt and enlarged the mansion. In 1789 the estate passed by marriage again to William Oakley of Shropshire.

The Oakley's remained at Tan y Bwlch for the next 2 centuries, during which time they planted most of the gardens we see today. William Edward Oakeley (1879-1912) extended the house, and built a hydroelectric system that made Plas Tan y Bwlch the first house in north Wales to be lit by electricity created on site.

The Oakley family fell into financial difficulties, and the Meirionnydd County Council bought the estate in 1969. In 1975 the house reopened as a Study Centre for the Snowdonia National Park. The Study Centre offers regular courses in industrial archaeology, history, folklore, traditional crafts, and painting, in the environment of the historic mansion.

The mansion house stands in 13 acres of historic gardens, most laid out in the Victorian period. The highlight is a rhododendron tunnel more than 120 years old. Aside from rhododendrons, the garden features colourful displays of azaleas, at their best in spring.

South-facing borders provide summer colour, and deciduous trees add a splash of red and gold in the autumn.

At the top of the site are formal terraces, with a pond and water garden. The sloping hillside features conifers and ornamental shrubs. Trails wind through shady woodland planted with native British oak, yew, Scots pine, and beech and interplanted with unusual trees and shrubs from overseas. The woodland area provides an important conservation area that is home to a wide variety of birds, animals, insects, and wildflowers.

The gardens are usually open 10-dusk. The house may be open depending on activity courses taking place.