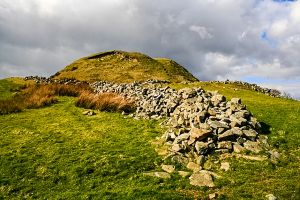 Tomen-y-Mur Roman Fort
Tomen-y-Mur is a rectangular Roman timber fort and amphitheatre in an isolated location. The fort was rebuilt in stone in the early 2nd century and was abandoned by AD 140. Within the fort is a Welsh castle mound, reused by the Normans.
History
The fort was erected in during the governorship of Gnaeus Julius Agricola, around 78 AD. It was part of a campaign to control the Ordovices tribe, who actively resisted the Roman rule. Agricola's response was a brutal campaign that suppressed, and almost wiped out, the Agricola. Agricola built a series forts like Tomen y Mur to control the Welsh tribes. The location, though remote, is beside a crossing of four Roman roads.

The timber fort housed about 1000 cavalry initially, but early in the 2nd century conditions must have eased, for the fort was rebuilt in stone to accommodate a much smaller force of around 500 infantry. Need for a military presence must have lessened enormously over the following few decades, for the fort was abandoned around 140 AD.

Quite a lot of the fort remains, including areas outside the fort used as a mansio, or house for visiting officials, a bathhouse, parade ground, and burial mounds. Earthwork outlines suggest a temple site, and a rare military amphitheatre. It is possible that the amphitheatre was built to compensate the garrison for such an isolated posting.

An interesting series of carved 'Centural Stones' were later found at Harlech Castle which seem to detail the reconstruction of Tomen y Mur in stone. The stones name army units and the amount of fortress wall each unit built. The stones are kept at the Segontium Museum in Caernarfon.

A short section of 2nd century wall has been reconstructed to show what it must have looked like in Roman times.

Within the walls of the Roman site is a striking castle mound, or motte, sometimes called Mur Castle. We do not know exactly when the motte was built, or why, but it could have been built by William II in response to a Welsh uprising in 1095.

Another explanation is that the mound was raised by the native princes of Cunedda's lineage after the Romans departed, and a palace stood atop the mound. When the Normans came to fortify the site they simply reused the earlier Welsh defences.

The motte is what gives the site its name, for Tomen y Mur translates as 'mound in the walls'.

Welsh Legend
Tomen y Mur is featured in the traditional folk tales known as The Mabinogion, where it is said to be the location of a legendary palace known as Ardudwy. According to legend a prince named Lleu lived at Tomen with his wife Blodeuwedd. Blodeuwedd conspired with her lover Gronw to kill Lleu, and ruled from Tomen after his death. But the slain prince was brought back to life by the Children of the Don, and killed Gronw, while Blodeuwedd was changed into an owl for her dishonour.

Tomen y Mur is one of the fascinating historical sites in northern Wales, combining Roman, Celtic, Norman, and medieval history in one place.