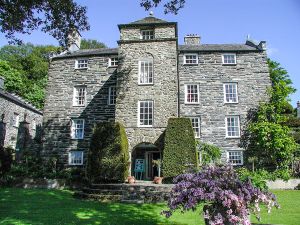 Quirky, romantic, and exceptionally beautiful Italianate gardens surround the house of Clough Williams-Ellis, architect of Portmeiron. The eccentric architect developed the gardens over a period of 70 years as a romantic series of vistas, incorporating architectural focal points such as a folly and an orangery.

The house of Plas Brondanw was begun in 1550 by John ap Hywel and the house has never been bought or sold. A new wing was added in 1666, but by the early 20th century the old house was in poor condition.

In 1908 Clough Williams-Ellis inherited the house from his father John, who had grown up here. The house became one of Williams-Ellis's passions, and he poured time and effort into improving the property, at the same time as he was launching his career in architecture.

By the time he inherited Plas Brondanw the house had been separated into flats, and the gardens divided into allotments.

Over the next few decades Williams-Ellis set about restoring the house and transforming the garden into a picturesque landscape of Italianate design, with romantic views and dramatic vistas inspired by Italian Renaissance landscapes. The gardens rely on Italian architectural elements throughout, with avenues of trees, topiary, and stone walls leading a viewer's eye to the distant mountains.

Williams-Ellis worked on Plas Brondanw for 6 decades, and much of the work was carried out at the same time as he was creating the fantasy village of Portmeirion. Not surprisingly, Portmeirion and Plas Brondanw share many of the same characteristics. Though Portmeirion is by far the more famous of the 2 properties, Plas Brondanw must be considered Sir Clough's greatest accomplishment.

The gardens are laid out as a series of enclosed rooms, linked by axial views leading to distant peaks. Within the garden rooms pieces of sculpture are carefully arranged. Among the many, many fascinating garden elements is a Romanesque column, rescued from the demolition of Hooton Hall in Cheshire and now the centrepiece of a garden pool.

Williams-Ellis purchased 8 columns from the sale, and the other 7 are at Portmeirion. Then there is the Flaming Urn, a striking piece of sculpture built to commemorate Plas Brondanw's rebuilding after a disastrous fire.

Other features include a humorous Fire Boy fountain, and a castellated tower built to mark Williams-Ellis's marriage in 1915. The tower was built with funds given by Clough's fellow officers. They originally planned to give him a silver salver, but with his characteristic quirky humour, he asked instead for a ruin, so here it is. How many people ask for a ruin as a wedding present?

The gardens are open from spring to autumn, and there is ample parking at the site. 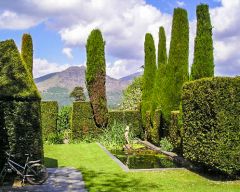 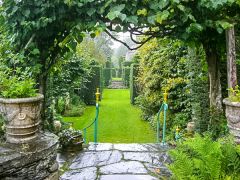 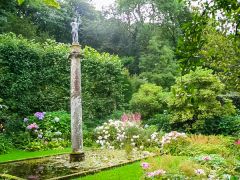 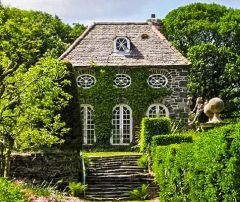