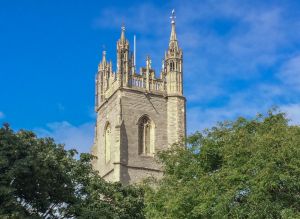 Known as Cardiff's 'church in the market place', St John's is the oldest building in Cardiff still in continuous use apart from the nearby castle.

In 1107 monks from Tewkesbury Abbey established a Benedictine priory near the River Taff. The monks left in 1211, deeming the site unsuitable, but the priory church lived on as St Mary's parish church. Then around 1180, a new church dedicated to St John the Baptist was built in the city centre as a chapel of ease for St Mary's.

The church was badly damaged during Owain Glyndwr's 1404 rebellion and was rebuilt in the second half of the 15th century, when it gained its present nave and the striking Perpendicular Gothic style west tower, rising 130 feet high.

St John's was heavily restored in the late-Victorian period when north and south aisles were added to the nave, but it remains essentially a late medieval building, Grade I listed for its heritage value.

In the Lady Chapel are a pair of Jacobean memorials to the Herbert brothers. One served as a diplomat, the other as castle custodian. The 'Father Willis' organ, built in 1894, is one of the finest in Wales, and there is excellent Victorian stained glass throughout.

There is a carved Victorian reredos crafted by Sir William Goscombe John, with gilded figures of Abraham, Aaron, Isaac, and Isaiah beneath an exquisite canopy designed by John Pritchard.

Access is extremely easy; the church stands beside the market, a stone's throw from the castle, in the heart of Cardiff city centre. The church information suggests it is open regularly during daylight hours, though when we last visited we found the doors locked.

More self catering near Cardiff, St John the Baptist Church >>