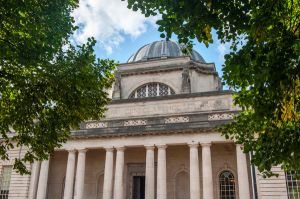 National Museum of Wales
This world-famous museum holds important galleries of Welsh and European fine art, ceramics, and sculpture. One highlight is the "Evolution of Wales" gallery, which shows how the geology of Wales developed, and the "Natural History of Wales" exhibition. The museum holds a notable collection of French Impressionist art.

The National Museum of Wales was established in 1905, based on the collections of the Welsh Museum of Natural History, Archaeology and Art. It was initially housed in the central library building in Cardiff city centre, but a new home was erected in Cathays Park and opened in 1922. The museum was renamed the National Museum Cardiff to separate it from other linked national museums across Wales.

This free museum offers collections on the archaeology, geology, zoology, and botany of Wales. Exhibits range from prehistoric fossils to archaeological finds at prehistoric sites. The museum has too many collections to exhibit all of them, so collections are rotated in and out of the galleries.

The Evolution of Wales exhibition covers over 1000 square metres and explores the growth of Wales from its earliest geological formation to the end of the last Ice Age. It goes back, not just to the origins of modern Wales, but to the origins of the Universe itself!

From the Big Bang you find out how the geology and geography of Wales developed. See dinosaurs and woolly mammoths, meteorites and moon rocks. Learn how the climate of Wales evolved, how early mammals lived, and how the landscape was formed.

The Clore Discovery Centre offers a hands-on experience for visitors, particularly younger visitors, to enjoy everything from a Bronze Age weapon to ancient fossils.

A more recent addition is the National Museum of Art, which opened in 2011. This includes a fabulous collection of Old Master artwork, British and French paintings including French Impressionist masterpieces by Cezanne and Renoir, and a large number of Welsh paintings. Major Welsh painters and sculptors are represented, including Augustus John and sculptor John Gibson.

The museum is free to enter, and there is paid public parking just off Museum Avenue.

More self catering near National Museum of Wales >>

More bed and breakfasts near National Museum of Wales >>