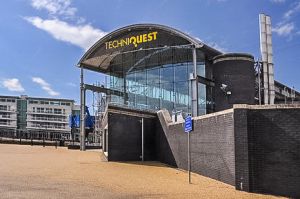 Techniquest holds over 140 exhibits on a science theme, and everything is geared towards getting people involved and interested in science. Fire a rocket, watch an ant colony, play a giant keyboard, and race an electronic car.

See a live show in the Science Theatre, and watch the mysteries of the universe unravel in the Planetarium. See how a hot-air balloon works, move half a ton of granite, learn the science behind a hydrogen rocket, solve a chunky puzzle, and sink an oil rig. There is so much to do, see, and learn at Techniquest.

Techniquest was the first science centre in Britain, founded in 1985. It began in the gas showroom across from Cardiff Castle and then moved to a pre-fab building in Cardiff Bay. In 1985 it moved to its Mermaid Bay site in Cardiff Bay, a building previously occupied by a heavy engineering plant.

The main focus of Techniquest is to give visitors, particularly children, a hands-on experience of science and inspire people to learn more and explore scientific interests in maths, technology, and engineering. It aims to make science more accessible and foster public debate on science and technology.

The museum doesn't just wait for visitors to come to one of its regional venues; it comes to them. The museum has regular travelling shows visiting cultural events and shopping malls around Wales to engage a wider audience.

Techniquest has branches at Narberth, Wrexham, and Llanberis. Access is fairly simple, with regular buses from central Cardiff and trains to Cardiff Bay Station, a 5-minute walk away.

More self catering near Techniquest >>

More bed and breakfasts near Techniquest >>