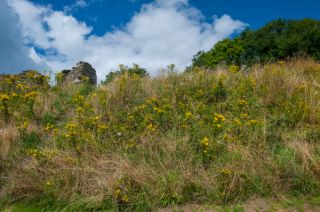 Loughor Roman Fort
The 1st century fort of Leucarum was built on a rise of ground overlooking the River Loughor. The fort was abandoned in the middle of the 2nd century, then possibly reused in the late 3rd-early 4th century. Loughor Castle was later built within the earthworks of the Roman fort. More of the site's history is contained on our article on the castle.
The first record of a fort here comes from the Antonine Itinerary, written in the late 2nd century. Leucarum was situated mid way between Carmarthen and the changing-post at Neath. The location at the mouth of the River Loughor meant that the fort could be supplied by sea as well as by land.

Investigation by archaeologists revealed that part of the fort lies buried beneath the later Norman castle motte. The outline of three sides of the fort have been found, though the western defences appear to be lost beneath the nearby railway embankment.

The original defences consisted of an earthen rampart defended by a V-shaped ditch. The rampart stretched 28 feet wide at the corner angle and 35 feet on the river side. The rampart was later reinforced with stone, the ditch filled in, and a second ditch dug outside the first. At the same time, corner towers wee erected. The second ditch filled up with debris over time, suggesting a long period of neglect, then a third ditch was dug beyond the second.

The enclosed area was about 5 acres in total, with the original timber fort about 400 feet long. The earliest finds at Leucarum date to 75 AD, and the last finds are coins from the reigns of Gallienus and Constantine, suggesting that the fort was finally abandoned in the first few decades of the 4th century.

It is difficult to distinguish between the Norman castle defences and the Roman fort, but you can make out broad earthworks surrounding the motte. It is fascinating to think of how long this riverside site was in use, and how it must have changed and developed over time.