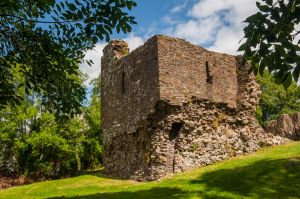 Loughor Castle is a fascinating site, with the partial remains of the 13th-century tower within the ruins of a Norman earthwork castle, itself constructed in one corner of a Roman fort.

The simple earthwork Roman fort of Leucarum was built around 75 AD to guard the lowest crossing of the River Loughor. Around 110 AD the fort was strengthened with stone walls. It was in use until the middle or late 1st century, then abandoned, before being used briefly again in the late 3rd century.

The Norman motte was constructed around 1099 by Henry Beaumont, Earl of Warwick. The initial motte was extended to create an oval ringwork castle. The castle defences were not terribly elaborate, composed of wooden ramparts surrounding simple wooden domestic buildings. The castle was sacked by the Welsh in 1151, but it was quickly retaken by the Normans, who rebuilt and strengthened the defences in stone. 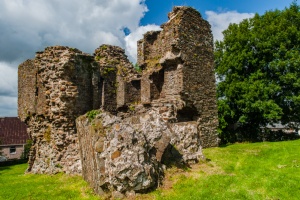 The east front with collapsed staircase

In the early 13th century John de Braose added a low curtain wall, and his descendant, William de Braose III, added a rectangular two-storey stone tower in the late 13th century. It is this tower that is the most obvious remain at Loughor.

It fell out of use after the conquest of Wales by Edward I, and gradually fell into decay. It eventually passed into the hands of Cadw, Welsh Heritage.

A romantic, though unsubstantiated, rumour suggests that there is a secret tunnel under the castle, leading to a buried treasure. Though the site is now ringed by busy modern roads, it is well worth taking the time to explore the remains, which are accessible at any time.

There is a free parking area on the riverside, just off the roundabout on the eastern end of the bridge across the River Loughor (off the A484 or A4240). It is a short walk up Ferry Road, and the castle is in front of you, on a low mound across the A4240.

The remains are not extensive, but the earthworks are quite impressive. A section of spiral stair has fallen to earth upside down and allows you to get a good look at the construction technique.

There is one intriguing feature at the south-west corner of the castle wall, where an odd channel, descends to earth like a medieval garbage chute or waste water drain. 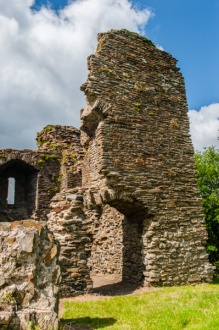 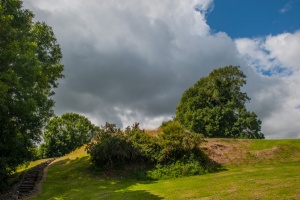 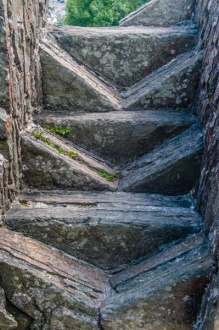 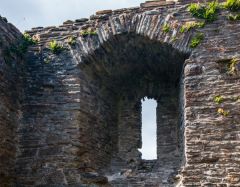 More self catering near Loughor Castle >>