HERITAGE HIGHLIGHTS:   The museum is housed in an historic 18th century townhouse 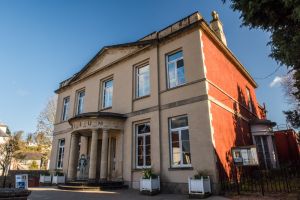 The Chepstow Museum is housed in Gwy House, a beautiful late 18th century townhouse built for a rich apothecary. The museum traces the history of Chepstow from Roman times to the present, with a wealth of local history information and archives.

In 1796 Warren Jane the Younger built an elegant town house at the bottom of the town. Gwy House was later owned by a surgeon, and in World War One it served as a Red Cross Hospital. After the war it continued in medical use as the Chepstow & District Hospital. One of the most interesting exhibits in the museum traces the history of the house and how it was used over the centuries.

The museum exhibits look at Chepstow's role as a major port and market town, and how the timber and wine trades combined to bring prosperity to the town. Recreated scenes from different historic periods capture life and trade in Chepstow, including salmon fishing and shipbuilding. It is not all about industry, though; see old photographs, posters, and paintings showing how people spent their leisure time.

A series of paintings by Linda Waters shows how Chepstow grew; beginning in the Roman period, and vividly portrays the importance of the town's bridges in its history. Art forms a major part of the museum displays; there is a large collection of prints and drawings from the 18th and 19th centuries showing how Chepstow and the Wye valley changed over time.

Exhibits look at the 'Wye Tour', popular with romantic artists like JMW Turner. The Wye Tour can claim with some validity to be Britain's first packaged tour. It started in the 1740s when Rev. John Egerton of Ross on Wye began to take his friends down the River Wye in his pleasure boat. The idea became popular, and by the 1770s a commercial service operated a 2-day excursion from Ross to Monmouth and Monmouth to Chepstow.

The boats stooped at picnic areas, but more importantly, they had tables on board where tourists could sketch, or write poetry or prose. Visitors were expected to be inspired by the picturesque landscape of the Wye Valley, and taking the Wye Tour became extremely popular in artistic circles.

There is a regular series of changing exhibits, children's activities and workshops, plus quizzes and worksheets to help younger visitors get the most from their visit.

The museum is located at the bottom of the town, opposite the castle car park. It is open year-round, with restricted hours in the winter months.

I quite enjoyed the museum. It was fascinating to learn about the history of the building itself and the different uses it has had over time, particularly when it was a school, and then a hospital. The exhibits were very good, and we especially enjoyed the interactive displays centred on Chepstow history through the ages. For example, we learned that Chepstow had a flourishing trade with Iceland, which we never would have guessed.

There is a very good display on the 2 historic bridges in Chepstow, and a collection of artefacts used by the police and fire departments. I thought one look at the historic police handcuffs would put me off a life of crime! One good feature was that you could still see some of the original 18th century house decoration and elegant style, particular in the staircase and landing area. 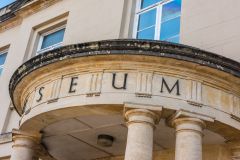 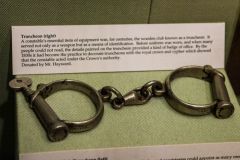 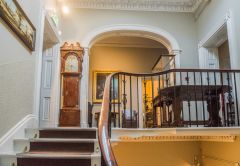 More self catering near Chepstow Museum >>