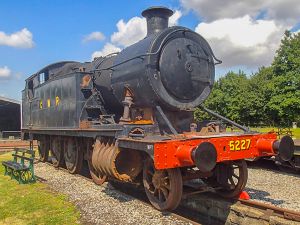 Didcot Railway Centre
Didcot houses the steam engine collection from the old Great Western Railway in the original engine shed. Check ahead for the dates of their Steamdays, when the old warhorses come out of the shed and take you for a ride.

Isambard Kingdom Brunel's ambitious Great Western Railway was built to link London to the port of Bristol. The new east-west line needed to cross the north-south Oxford line, and Didcot was chosen as the junction. Didcot was also roughly halfway between London and Bristol, and was thus an obvious choice to house a maintenance facility for engines and rolling stock.

The GWR line through Didcot opened in 1844, and used a huge timber-framed shed to house the maintenance works. The timber-framed building was replaced by a steel and brick shed in 1932. The new facility also included a repair shop and coaling stage, sand furnace and turntable, plus office quarters for staff. During WWII a steel and tin shelter was added. When steam was replaced by diesel in the 1960s there was no need for the Didcot facility, so the shed closed in 1965.

The site was reopened as a museum by the Great Western Society. The GWS have retained the original GWR buildings, including the 1932 engine shed, the original repair shed, and the 1988 locomotive works. There is a working turntable and pit, originally used at Southampton Docks.

There are three short sections of track in use; the Broadgauge Line (7 ft gauge) running from the transhipment shed, the Mainline, which runs along the eastern edge of the site, and the Branchline, on the western edge of the site. The Branchline starts at a wayside halt called Didcot Halt, and runs to the transhipment shed. It was used to transfer goods between narrow and regular gauge lines.

See steam engines, wagons, coaches, railway buildings, and a wealth of objects associated with the GWR. The Engine Shed holds 4 tracks, each containing up to 6 tank engines or 3 tender engines. Look for the smoke hoods that are set above the tracks and designed to carry smoke up through wooden chimneys in the shed roof. See the Coal Stage, where locomotives were loaded with coal and water.

The Centre holds regular steam days and diesel railcar days, when the general public can see locomotives in action and take rides on historic trains. There are also regular Thomas the Tank Engine days, when children can ride behind Thomas, and meet the Fat Controller.

Access is an issue; there is no direct road access, as the centre is completely surrounded by active rail lines. The Centre can only be reached on foot via a subway from Didcot Parkway rail station.