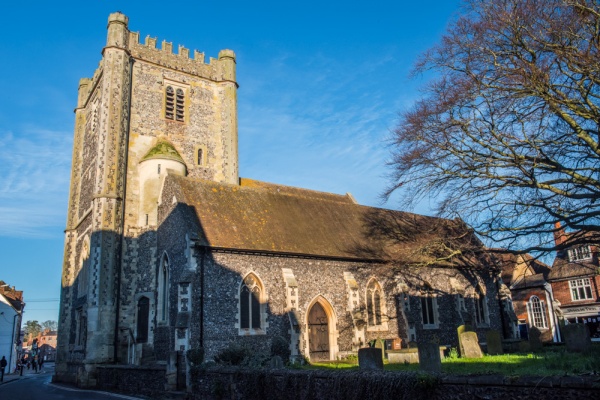 Wedged behind the attractive town hall of Wallingford is a medieval gem, the church of St Mary le More and All Hallows. There has probably been a church on this site in the centre of Wallingford since the Norman period, though we do not know exactly when it was built.

We do know that in 1075 the advowson (the right to appoint rectors) was granted to St Albans Abbey by Neil and Amice Daubenay. Before 1160 the church had passed to the Priory of Holy Trinity, a daughter house of St Albans Abbey, and was later owned by Cardinal Wolsey to the benefit of Cardinal College, Oxford (renamed as Christ Church College after Wolsey's fall from power).

We also know that the church was rebuilt in the late 13th century, and comprehensively remodelled in 1854 under the direction of David Brandon. That Victorian rebuilding cost just £2400 and unfortunately swept away many of the medieval furnishings. The oldest part of the building is the base of the tower and the chancel walls, both probably of 14th-century date. 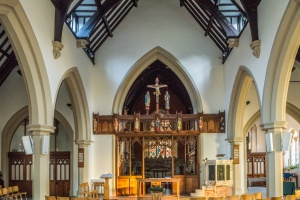 The base of the medieval rood screen survives, though it is now surmounted by a new screen, erected in 1925 in memory of 2 Miss Hedges of Wallingford Castle House who died 4 years earlier. Pass through the screen to the chancel, where you will find the sanctuary, beautifully panelled in marble from quarries around the world and erected as a memorial to John Hedges (d. 1901). Hedges was a local solicitor and author of a book of Wallingford history.

Beside the screen is a beautifully sculpted 19th-century Italian marble pulpit, erected in 1888 and crafted by sculptor Onslow Ford. In the south aisle is the font, which is the oldest feature in the church, dating to the 15th century. The south aisle windows hold some very good Victorian glass, including one given in memory of Margaret Legh, wife of Colonel Legh, MP, of Lyme Park in Cheshire.

Another window was given in memory of a former rector named John Langley, who died in 1875. Probably the finest window is the west window in the north aisle, crafted by Thomas Willement, who earned the moniker, "the Father of Victorian Stained Glass". There are also a series of very good marble memorial tablets on the wall, including one to Thomas Renda, who died in 1722.

The oldest part of the building is the tower, built in 1653 to replace an earlier tower struck by lightning. The tower was built using flint and stone from nearby Wallingford Castle, which was being dismantled by order of Parliament following the Civil War. In the tower is a ring of 8 18th century bells.

I wasn't actually planning to visit St Mary's, but when I saw that lovely 17th-century tower peering above the nearby town hall I couldn't resist popping in for a peek.

The church is very much a product of its 19th-century restoration, and though most of the earlier medieval building has been swept away, what remains is a lovely example of a Victorian town church, with some very fine Georgian memorials and excellent 19th-century glass.

St Mary's is not the only active church in the parish; a short walk away on St Leonard's Lane is St Leonard', begun in the Saxon period. Even closer is St Peter's, a lovely redundant 18th-century church now cared for by the Churches Conservation Trust. 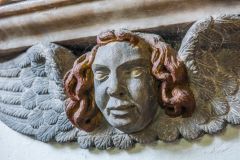 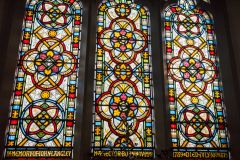