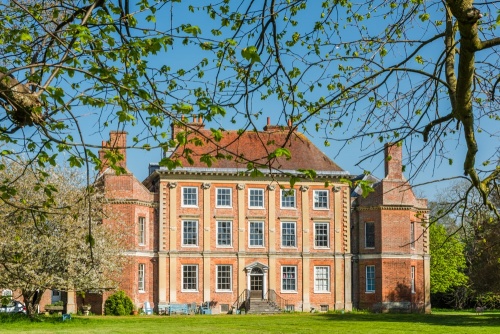 Milton Manor House
Milton Manor is an elegant 17th-century house [possibly] designed by Inigo Jones and extended from 1764 for Bryant Barrett, the official gold and silver lacemaker to King George III. The Gothic library is the most impressive interior room, while the house is set in a splendid garden location with two lakes and enjoyable woodland walks.

The present iteration of Milton Manor is a symmetrical residence, with a formal French parterre laid out along the front facade.

Though much of the building we see today is Georgian, the manor almost certainly dates to sometime between 1630 and 1680, with the most likely date being the first few years after Charles II's restoration to the throne in 1660. A family tradition suggests that Inigo Jones may have been responsible for the design, but there is no proof to confirm or deny this.

That first house was essentially the central block of the building you see today, a symmetrical building with a central oak staircase running from the cellars to the attic. 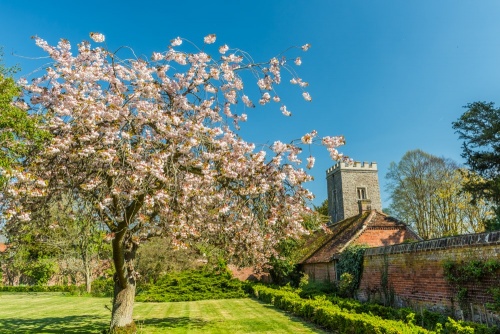 The manor site was once owned by the Abbey of Abingdon, but after the abbey was dissolved in 1536 by Henry VIII the land was granted to Baron Wriothesley, who quickly turned a profit by selling it on to Thomas Calton, a London goldsmith. Milton stayed in the hands of the Calton family and their descendants for the next 218 years.

A later Calton married the daughter of Admiral John Benbow, who lived for a time in the dower house (which is no longer standing). In the 1690s Tsar Peter the Great of Russia visited Milton Manor to consult with Admiral Benbow on shipbuilding. He is said to have remarked after just one night that Milton was 'the coldest house he had ever visited'. Another royal visitor around the same time was William of Orange (William III).

In 1764 the last three Calton heiresses, their fortunes eroded through years of family bickering and lawsuits, sold the property to Bryant Barrett and it has remained in the Barrett family ever since.

Barrett was a London merchant and a Catholic who managed to support the Stuart cause yet still be made Royal Lacemaker by Appointment to King George III. Family tradition suggests that Barrett loaned money to the Stuarts but it was never repaid. Over time the money amounted to a staggering total of over Â£200,000, equivalent to hundreds of millions of pounds today. 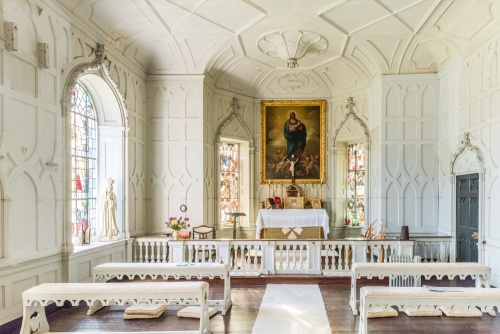 It is a wonder, then, that George III gave the Barrett family permission to build one of the very first private Catholic chapels in England after Catholic emancipation. The grant came with severe restrictions, though. The chapel could not be called a 'chapel' (the family call it the 'Mass Chamber'), and had to be built on the first floor so that local residents would not be tempted to peer in the windows and - presumably - be corrupted by what they saw.

In addition, only the Barrett family were allowed to worship there; no friends or family could worship with them. The family got around this last stipulation by building a gallery overlooking the chancel, with two shuttered observation windows that were cleverly disguised so as to be invisible when shut.

The Chapel boasts an exceptional collection of stained glass, some of it brought from the nearby medieval church at Steventon. In the sanctuary are two windows with extremely early stained glass, some dating to as early as the 14th century. In the nave windows are panels of 16th-century Flemish glass. In display cases at the back of the chapel are vestments worn by Cardinal Newman, a family friend. The vestments feature magnificent gold and silver brocade, made by the Barrett family.

When Barrett bought Milton Manor he was determined to create a fashionable country seat to showcase his wealth and status. The original 17th-century house was 'modernised' in Georgian style, with over 700,000 bricks helping to create the stylish new house. Barrett added two wings to the earlier building, a walled garden, and elegantly landscaped grounds with lakes and ponds linked by underground channels made of brick. Closer to the house are stables, a dairy, and a brewery. 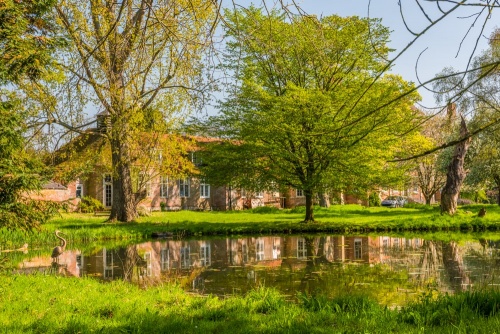 A quiet pond in the grounds

Perhaps more important for visitors to the house, he created an exuberant library in Strawberry Hill Gothic style, following the current fashion popularised by Horace Walpole. Another atmospheric room is the entrance parlour, where, our guide told us, a Calton father and son once engaged in a duel. it seems that the spendthrift son had sold off most of the family furniture when the father was away. The father returned home to find the house half empty, prompting a family showdown. The duel solved nothing and only served to launch a series of lawsuits between the father and son that dragged through the courts for years.

The Calton and Barrett families seem to have been a mixed lot. Some were very good at making money, others were very good at spending it. As a result, at various points in its history Milton Manor had money lavished on it and at other times it was neglected.

One owner was John Basil Barrett, who managed to lose the family fortune by speculating [badly] in the Victorian railway boom.

The low point came in 1911 when the house contents had to be sold, including the beds used by William of Orange and Peter the Great on their visits.

A worse fate awaited during WWII when the Manor was occupied by the RAF and emerged in a very poor condition. It was rescued from decay by Marjorie Mockler, who restored the Manor as a family home, had it listed Grade I for its heritage value, and opened it to the public.

Milton is delightfully quirky. Where else could you visit a beautiful historic house and find llamas wandering through the grounds? They are very friendly creatures, especially if you happen to have food on hand. Sharing space with the llamas are several sheep, who are also free to wander. 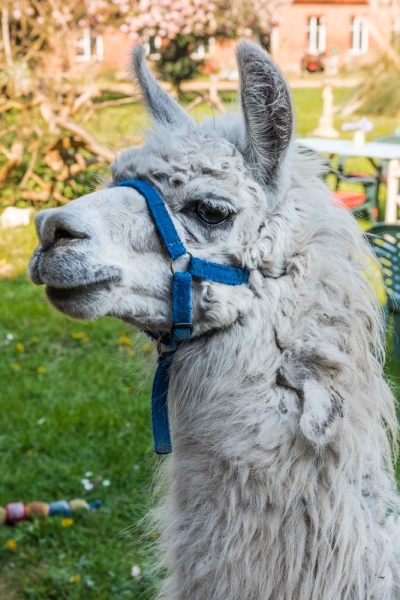 One of the resident llamas

Milton Manor is only open a limited number of days a year. We came on a sunny Easter Sunday and found just a few other visitors. The house is signposted off the A34 just south of Abingdon. Simply follow the signs to the entrance lane off High Street, by the village pub.

Immediately beyond the pub is a parking area for the Manor, in a grassy field opposite the medieval parish church. Simply walk past to the church to the entrance gates. It is true that Milton Manor House is close to a major road but it sees to be tucked away in its own little world, or in a time warp, lost to modernity. As the Poet Laureate John Betjeman remarked, 'Like all the best things in England, this is hidden'.

When we visited the kiosk at the entrance gates was unmanned so we walked to the teashop located in the former servants' quarters beside the main house where we paid for our tour. In a lovely, quirky touch, our tour tickets were simply old playing cards.

Admission to the house is by guided tour only. Our tour guide was exceptionally knowledgeable, enthusiastic and entertaining. I'd go so far as to say that it was one of the most enjoyable stately home tours we have ever had - and we've had quite a few! Do not expect an opulent showpiece stately home; Milton is very much a 'lived in' family home but is still a delight to experience. 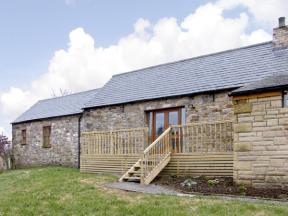 This two bedroom property in the pretty hamlet of Milton is able to sleep up to four people.
Sleeps 4 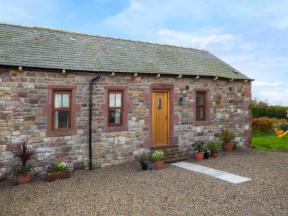 This charming, stone-built, semi-detached cottage is set on the owners working farm in the rural hamlet of Milton, two miles from Brampton, sleeping four people in two bedrooms.
Sleeps 4