Self Catering in Devon - Dartmouth 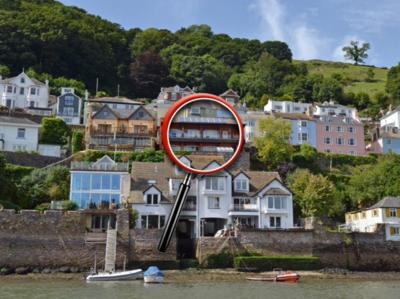 This riverside residence is in Dartmouth, South Devon and can sleep ten people in four bedrooms.

This fabulous family residence with premier riverbank position, is just a short stroll to restaurants, cafes and bars of Dartmouth in South Devon. Arranged over three floors with four large bedrooms, one with en-suite and each with river views. Two rooms come with access to the top floor balcony overlooking the river.

On the middle level an open plan room with comfortable sitting area with large 55" TV, pool table and dining area. There is a separate kitchen well equipped to cater for large parties with another dining area. A snug room is fully equipped with lots of games and TV with Wii Sports.

On the lower ground floor the swimming pool and poolside gym with table tennis can be added at an additional cost per week. The property has two parking bays. Bight Boathouse is a fabulous choice to share with friends and families at any time of year.

Spooky
We stayed here a couple of years ago. The place even then needed an upgrade. On the first day our dog fell over the balcony sustaining serious injury. My brother in law slipped on floor and needed stitches in his head. I fell by the pool and had life changing injuries to my wrist. Would love to hear from others on their experiences in this house
Barbara L
2019-10-22

Dreadful
Positives - view is stunning and there is parking on the property. Negatives - this is a tired, dated property which needs extensive renovation and a deep clean. It is not worth the money we paid. The "lavish" en-suite was dark and dingy, with dirty shower tray, two lights not working, taps awkward to turn off and a toilet which was difficult to flush. Helpfully, a bowel was at the side so you could use it to fill the toilet system with water! The en-suite bedroom was also well past its best with dated furniture, rusty rails inside wardrobes, peeling wallpaper, dismantled smoke alarm, dirty scruffy curtains hanging badly. Given that this property sleeps 10 you would expect the family bathroom to at least have a proper shower and not a hand held one over the bath. Again problems flushing the toilet. The sofas are dirty, collapsing to the sides and belong on the tip. Another smoke alarm dismantled - this is a health and safety issue and a common theme. Again bulbs need changing. Threadbare carpet on the spiral staircase so care needs to be taken when using the stairs. The patio furniture is broken. The gym equipment is rusty, parts broken and dangerous. The sauna light doesn't work or the booster on the jacuzzi. This place is an accident waiting to happen. We are awaiting Sykes' comments.
CrystalHB
2018-09-22

Hole, not bolthole.
If you would stay literally anywhere for a great view then you just may like this place. However, if you're expecting a higher end modern place to stay then forget it. I totally agree with the previous comments made by people who have stayed here, in that it's massively over-priced, badly in need of a gutting refurb, and there was so much wrong with it I'm not going to embarrass the owners by listing all its faults here. On the other hand if you want rotten patio furniture, smoke detectors broken, cracked ceilings, and an 80's decor that Delboy Trotter would turn his nose up at then look no further. Most of the gym equipment is either disfunctional or dangerous, the sauna has no lighting so be careful you don't trip into the hot coals, and if all this doesn't finish you off then the wasps nest near the overgrown plantpot terrace might. Nice view though.
Cosmopolitan679509
2018-09-15

Do not expect what you pay for!
I can only endorse the previous review. On arrival the main entrance stank of fermenting rubbish. The list of broken items is extensive, jacuzzi minus bubbles, bubble bath in ensuite minus bubbles, table on the patio broken, thread-bare dirty carpet, stained settees, loos that don't flush properly. One of the patio doors simply fell off its hinges when opened, thankfully onto an adult and not a child who would have been seriously injured. That took a week to fix, the loo was never sorted. I also agree with the previous reviewer about Sykes, they were completely useless and I certainly wouldn't book through them ever again as they obviously take no interest in the properties they let out. Apparently it is perfectly acceptable to advertise properties that bare no resemblance to the description. We met two friends of the owner on separate occasions, who thought it was amusing to tell us 'Terence never bothers to do any maintenance to his properties'. Ain't that the truth! Save your money.
holidayjunkye
2018-09-04

Do not book this property - not as described
We paid £4000 for a weeks stay in August 2018 through Sykes Cottages. We wanted a really good property and location for a family holiday which this property appeared to be. We were a bit shocked when we got there at how shabby and dated it was and also found that it was in need of a good clean. The carpets are well worn and stained. The taps in the bathroom were hard to turn off and the toilets had large signs on saying to flush twice (which still did not do it) Our main problems were with the pool area. It is advertised as having a gym, sauna, jacuzzi and games in this area. Well the jacuzzi packed up on the second day and we were told that there was nothing to be done as it was peak season. - This was not surprising as the buttons to turn it on were located under a thick piece of black tape!. The sauna had an exposed circuit board inside and would not switch on easily. The gym equipment was ancient, rusty and totally unusable. The whole pool area was dirty. None of the arcade games worked. To sum this up - the whole house needs a deep clean or updating and is not worth the money charged. I have photos to back this all up. Sykes cottages have told me that they only take the booking, any issues are between ourselves and the owners. I will never book through Sykes cottages again and if I had read their reviews prior to booking then I would not have booked through them. They do not check their properties that they let out and have nothing to do with you when you complain.
SamN1428
2018-09-03

Details
Central heating
Electric oven, gas hob
Microwave, fridge/freezer, fridge, 2 x washing machine, tumble dryer, dishwasher, 1 x 55" TV with basic Sky and 4 x TVs with Freeview, 4 x DVDs, Hi-Fi, Wii Sports with balance board, WiFi, Variety of games, arcade and casino games, DVDs, books and toys
Fuel and power inc in rent
Bed linen and towels inc in rent
Off road parking for 2 cars
Balconies with furniture, electric heaters and BBQ
Three dogs welcome at £20 each per week
Sorry, no smoking
Shop/pub 5 mins walk
Beach 3 miles
Note: May not be suitable for very young children
All children must be supervised on balconies
Note: May not be suitable for those with mobility difficulties
Note: Swimming pool/gym facilities attract an additional cost payable directly to the owner £535 for 2021 and £570 for 2022
Note: No Grocery Van is allowed on the Roof top car park, there is a 2 ton weight limit
Note: Disclaimer must be signed before using swimming pool facilities

Get an Ordnance Survey map covering the Dartmouth area.