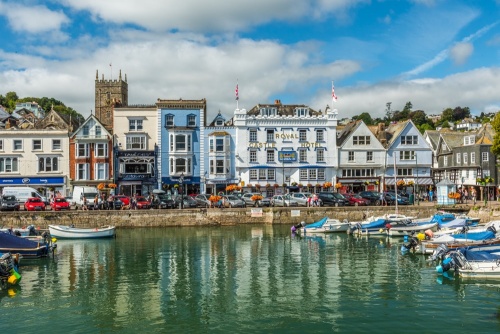 Dartmouth is a historic town at the mouth of the River Dart. It has been an important seaport since the early Middle Ages; in fact, it was from Dartmouth that English fleets left to take part in the Second and Third Crusades.

The naval heritage of Dartmouth is preserved in the Britannia Royal Naval College, sitting high on the cliffs above the Dart. The college has trained officers of the Royal Navy since 1905. Visitors can take regular escorted tours of the college and grounds. 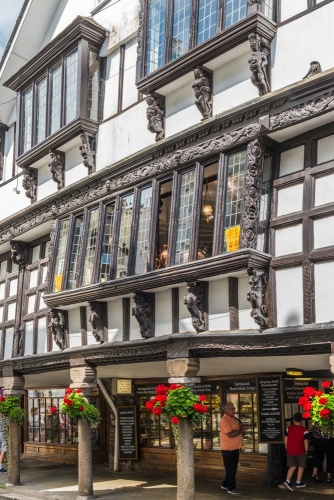 At the head of the River Dart is Dartmouth Castle. The castle was built after Edward IV offered 30 pounds a year "for ever" to the town burgesses if they would erect a "tower with a chain sufficient in length and strength to stretch across the mouth of the haven".

The castle was begun in 1388 and not finished until about 1403. Only one round tower survives, with a section of wall and a deep moat. The castle, which is now in the care of English Heritage, can be reached by ferry from the town between Easter and the end of October.

Above Dartmouth Castle, a trail leads through National Trust woodland to Gallants Bower, a Civil War fort built by Royalists to defend the castle and town from Parliamentary attack. It failed in its function, for a few months after it was finished in 1646 Parliamentarians under General Fairfax forced over 1,000 Royalists to surrender after a very brief siege. 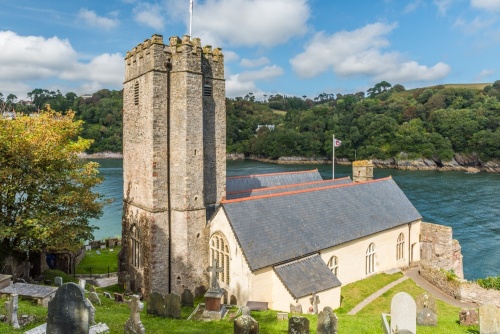 Within the castle enclave is St Petrox Church, dating to the 12th century. This was the place of worship for the soldiers of Dartmouth Castle from the later Middle Ages.

More striking is St Saviour's Church, built in 1372 and remodelled in the late medieval period and again in the early 17th century. The interior is richly furnished, and the traceried rood screen is especially striking. An early 15th century brass of a former mayor (and notorious privateer) with his two wives lies in the floor of the chancel.

The area around the harbour is full of fine 18th century houses, most adorned with hanging baskets of flowers in the summer months. The Butterwalk is even earlier, with an enjoyable series of 17th-century houses, including that housing the Dartmouth Museum. But these buildings are newcomers compared to the restored 14th-century Cherub, a delightful half-timbered building on Higher Street. 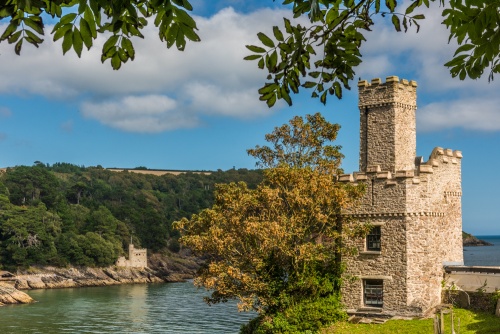 At the southern end of the Embankment stands Bayard's Cove Fort, built in 1510 to provide a second line of defence for Dartmouth from a seaborn invasion. The fort was easily captured by Parliamentary soldiers in the Civil War, who attacked from the landward side.

Bayard's Cove is the oldest part of Dartmouth, where fishermen would drag their boats up onto the beach in the days before the quay was built. Look for the former Customs House, and Morrocco House, once the Dartmouth Cottage Hospital.

At Bayard's Cove is a memorial commemorating the events of 1620, when the ships bearing the Pilgrim Fathers, the Speedwell and the Mayflower, set sail from Dartmouth to America. The Speedwell was soon found to be taking on water (the passengers suspected that the crew was intentionally making holes in the hull because they didn't want to make the Atlantic crossing). The two ships returned to port and eleven passengers on Speedwell boarded the Mayflower, which then set off for the New World on its own. 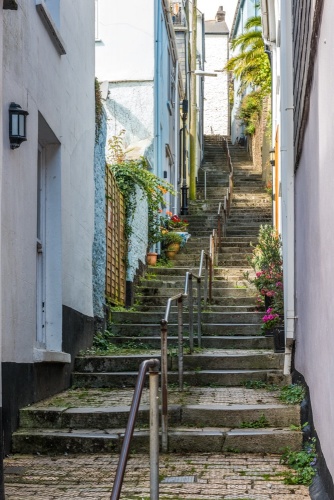 A steep alley and steps near the harbour

One of the most influential natives of Dartmouth was Thomas Newcomen (1663-1729), who developed an engine driven by steam at atmospheric pressure. Newcomen's invention helped speed the advent of the steam engine and provided the impetus for the Industrial Revolution. A working Newcomen engine dating to the late 18th century stands beside the Tourist Information Centre.

The Paignton and Dartmouth Steam Railway runs along the coast daily from June-September, and on selected days in April, May, and October. Rail trips can be combined with river cruises to make for an enjoyable day out.

The Dartmouth area provides good opportunities for walkers to enjoy the countryside, with the Dart Valley Trail following the river inland, and the Coastal Path allowing excellent ambles along the shore. If you'd rather cruise on the water than walk, you can take a boat trip up the Dart and around the surrounding area. For an even more relaxing time, visitors can enjoy the award-winning Blackpool Sands beach, just to the south-west of the town.

The Dartmouth area is much less developed than the seaside resort area around Torquay and Paignton to the north and provides a more relaxed centre for exploring south Devon. 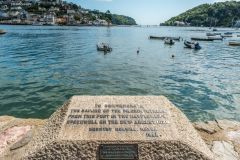 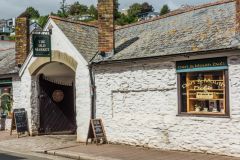 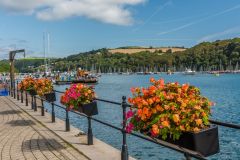 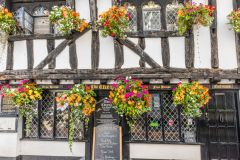 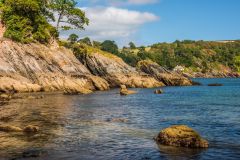 More self catering near Dartmouth

More bed and breakfasts near Dartmouth