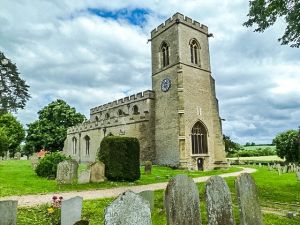 The village of Oakley lies on the River Great Ouse some 4 miles north-west of the county town of Bedford. The area has been settled since prehistoric times, as flint axes and arrowheads found within the village attest.

There was a Saxon settlement here, and the village was mentioned in the Doomsday Book. Around 1200 the Saxon church was replaced by a church of stone in the Norman style.

In the late 13th century the village was known as Oakley Reynes after the Reynes family, who held the manor of Oakley. The name stuck for at least 500 years, and there is still a "Reynes Drive" in Oakley.

Records from the 14th century show that Oakley was hit hard by the Black Death. Three vicars died in quick succession in the year 1349.

The manor at Oakley passed through several families until in 1749 it fell at last to the powerful John, 4th Duke of Bedford. The Duke demolished the old manor house and built the present manor.

In the mid 19th century the energetic 7th Duke went on a grand building spree, creating completely new cottages for all his tenants. These cottages were clean, neat, and (best of all from the Duke's viewpoint) economical to maintain. The cottages along High Street were built in blocks of six, and you can still see the Bedford crest on cottage gables.

In 1897 the Dowager Duchess of Bedford built a village hall to celebrate Queen Victoria's Jubilee. The Bedford finances suffered a major blow during the First World War, and in 1918 the Oakley estate and all the cottages were sold.

The parish church of St. Mary's is largely Early English, with the 12th-century tower and parts of the nave being the oldest sections of the building. The tower clock is one of the oldest in Bedfordshire, dating to 1620. The clock has only an hour hand, but it still keeps excellent time. The aisles, along with the south porch and chancel, were rebuilt in the 14th century.

More self catering near Oakley

More bed and breakfasts near Oakley