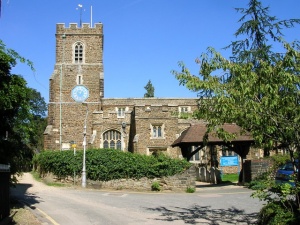 Ampthill stands in a lovely countryside setting atop the Greensand Ridge. The name of the village is Saxon, and, as you might have guessed, means "ant hill". There was a castle here in Tudor times, and it was at Ampthill Castle that Henry VIII's estranged wife, Katherine of Aragon, was interred by Henry from 1531-33. When Katherine's divorce from Henry was finalised in1533 she was moved to Kimbolton Castle in Cambridgeshire.

The site of Ampthill Castle is marked by a memorial cross in the park, with a dedication by Horace Walpole to 'the mournful refuge of an injured Queen' inscribed on the base.

The memorial is also famous as the hiding place of a jewelled crown created for the 1980 mystery book, "Masquerade", by Kit Williams. The author hid the crown beneath the memorial, then published clues to its location in his book, which set nearly 2 million readers guessing.

The park surrounds Ampthill House, built in 1686 for the Dowager Countess of Ailesbury and Elgin. The house was much altered in the late 18th century, with additions of wings and the north front by Sir William Chambers, as well as fanciful ceilings. The house is now a "Cheshire home" for disabled adults, but the park is open to the public.

The village contains several Tudor buildings and a variety of 17th an 18th-century homes. In fact, over 200 houses in Ampthill are listed (i.e. designated for preservation due to historic value). The Queen Anne style White Hart was once a coaching inn and is built upon a Tudor foundation. The Georgian house at 28 Church Street is protected by a wrought iron gate and screen that once graced Houghton House.

Church Square houses a collection of well-preserved historic almshouses dating back to the 15th century.

The parish church dates back to the 10th century but is largely Perpendicular Gothic. Look for the carved angels under the roof, and the monument to Richard Nicolls. Nicolls, whose family owned Ampthill Park, took New Amsterdam from the Dutch in 1664 and renamed it New York after his patron the Duke of York.

Eight years later Nicolls was killed by a Dutch cannonball at the Battle of Solebay. The fatal cannonball is incorporated in Nicolls' memorial, with a Latin inscription that describes it (loosely) as his "instrument of mortality and immortality".

Just outside the town is the early 17th-century almshouse of Oxford Hospital. A little further away are the ruins of Houghton House, said to be the model for John Bunyan's "House Beautiful".

Ampthill.org is the town's website; another useful resource is the Ampthill History Forum, a volunteer group concerned with the preservation of the town's history.

More self catering near Ampthill

More bed and breakfasts near Ampthill