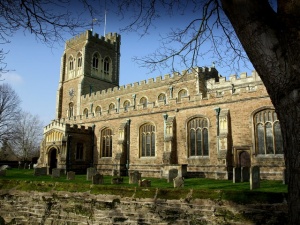 This village in North Bedfordshire is known for two major associations - one pleasant and one grim. Taking the pleasant first, Cardington was the home of John Howard, the prison reformer.

The grim reminder is a legacy of Cardington's association with the airship industry in the early years of the 20th century. It was from Cardington that the ill-fated airship R101 took off for its inaugural flight in 1930. The ship crashed in Beauvais, France, killing 48 people, including Air Minister Lord Thompson. The disaster effectively ended the RAFs use of airships.

The victims of the R101 disaster are buried in the churchyard of St. Mary's, and there is a memorial to the dead of R101 at the Cardington cemetery.

The large airship hangars still linger on as a reminder of the village's once-thriving past. The Airship Heritage Trust national headquarters is at RAF Cardington, in a building beside the hangars.

The RAF maintains a reserve collection of aircraft and a restoration centre at Cardington for the museums at which Hendon and Cosford. The collection can be visited by appointment only.

Cardington was also the birthplace of Elizabethan playwright and poet Sir George Gascoigne. Gascoigne translated Ariosto's I Suppositi into English, and the play is supposed to be the model used by William Shakespeare for his Taming of the Shrew.

More self catering near Cardington

More bed and breakfasts near Cardington