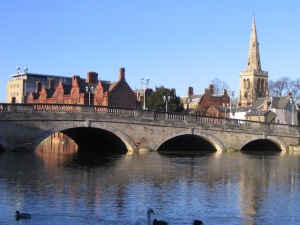 The county town of Bedfordshire lazes in a pleasant riverside setting on the Great Ouse. The major attractions are tied to Bedford's association with native son John Bunyan, author of Pilgrim's Progress.

Bunyan put his time in prison to good use, beginning the religious allegory Pilgrim's Progress, which was published in 1678. It became one of the most successful books ever printed and has been translated into over 200 different languages.

The Bedford Tourist Information Centre publishes a booklet describing places in and around the city associated with Bunyan. Also, see our John Bunyan biography here, and our map of Bunyan's Bedford.

The Bunyan Meeting on Mill Street was built on the site of a barn where Bunyan did much of his preaching. The bronze doors of the barn depict scenes from Pilgrim's Progress, and a stained glass window shows Bunyan writing in prison. The small museum of memorabilia associated with Bunyan showcases over 150 copies of Pilgrim's Progress from around the world.

Bedford is rich in churches. Of note are a quartet of saints: St. John the Baptist, St. Mary, St. Paul, and St. Peter de Merton. There is also the Bedford School Chapel, an Edwardian red brick affair.

A few miles down the road from Bedford lies Woburn Abbey. The seat of the Dukes of Bedford, Woburn is a Jacobean house remodelled by Flitcroft and Henry Holland into a treasure house of ceramics, furniture, and paintings. A remarkable (or merely peculiar, depending on your viewpoint) 17th-century grotto ends the tour.

Wild Britain Butterfly and Conservation Park, located in nearby Wilden, displays exotic species of butterflies and other wild creatures in 10 acres of wildflower meadows crisscrossed with nature trails. Follow Urchin the hedgehog on his adventures around the countryside.

Bedford's own museum should not be missed, containing as it does a diverse and fascinating overview of the natural and social history of the area.

Stevington Windmill is the only working windmill in the county of Bedfordshire. The mill was built in 1770 on a ridge above the River Ouse and was restored in 1951. Stevington is a fine example of a "post-mill", where the entire upper body of the mill turns on a central post to keep the sails oriented into the wind. Location: off the A428, 4 miles NW of Bedford.

More self catering near Bedford

More bed and breakfasts near Bedford