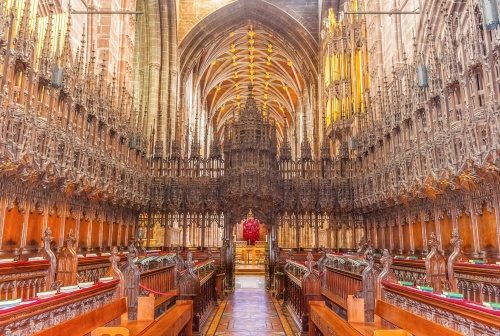 The story of Chester Cathedral is obscured in the mists of time. There may have been a Celtic temple here before the Roman invasion. When the Romans took control in the 1st century AD they built a temple on this site dedicated to Apollo. It seems likely that the temple was adapted for use as a Christian church when the Romans embraced Christianity in the 4th century.

We know that there was a church here in the 9th century when holy relics associated with St Werburgh were hidden here to keep them safe from Viking raiders. Werburgh was a Mercian princess who became a nun and rose to become the Abbess of Ely. Her claim to sainthood was not harmed by having three Saxon kings as relatives. 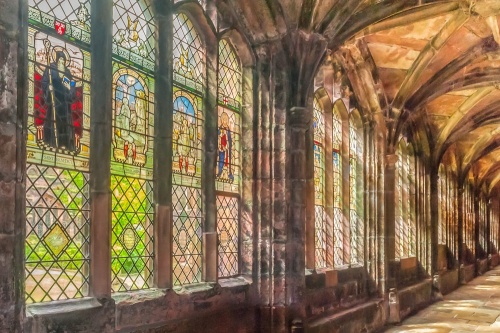 By the 11th century, St Werburgh was considered the patron saint of Chester. She was also considered the town's protector, especially after an invading Welsh army under Gruffudd ap Llywelyn unexpectedly abandoned their siege of Chester. This was taken as a miracle wrought by Werburgh.

The veneration of St Werburgh continued after the Norman Conquest. In 1092 Hugh d'Avranches, Earl of Chester, gave estates to the abbey and had the church rebuilt on a larger scale, perhaps as expiation for his worldly excesses. Hugh also established a new Benedictine monastery with monks drawn from Bec Abbey in Normandy. Earl Hugh entered the monastery shortly before his death and was buried there when he died in 1101.

Beginning in 1250 yet a third church was begun, this time in Norman Gothic style. The monks of Chester built the new church over the top of the old church, which they dismantled from the inside! 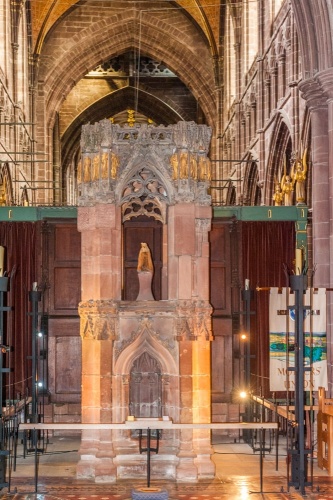 From Monastery to Cathedral

The monastery was suppressed by Henry VIII in 1540. The king handed the monastic buildings back to the city to serve as the cathedral church of the new diocese of Chester. This makes Chester the second of six monasteries to be re-founded as cathedrals by Henry VIII. The first was Westminster Abbey some eight months earlier, while Oxford, Peterborough, Bristol, and Gloucester soon followed.

Under the terms of statutes written in 1544 Chester Cathedral was administered by a dean, 6 prebendaries, 6 minor canons, a deacon and sub-deacon, 6 lay clerks, 8 choristers and a choirmaster, 2 grammar teachers, 24 grammar students, 6 bedesmen, 2 under-sextons, a butler, 2 porters, a cook, and an under-cook.

The cathedral drew its income from nine manors which had formerly belonged to the abbey. The last abbot was named as the first dean, and four of the prebendaries had served as monks. It's safe to say there was a lot of continuity between the abbey and the new cathedral. 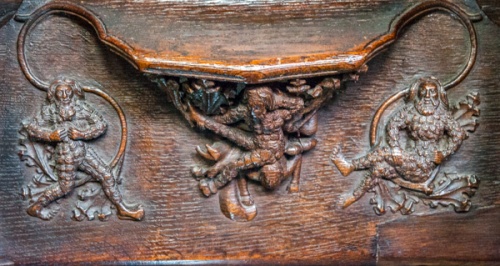 Medieval misericord in the quire

The oldest parts of the cathedral date to Hugh d'Avranche's rebuilding in 1092. You can see this late 11th-century Romanesque architecture in the north transept, north tower, and parts of the cloister.

Around 1380 the church gained a magnificent series of carved quire stalls. Look closely at the carvings on the misericords and bench ends; aside from the obvious (St Werburgh), there are details of Arthurian legend, Aesop's fables, and fabulous mythical beasts, plus one humorous figure of a man enjoying a mug of ale! Look for an elephant with horse's hooves. 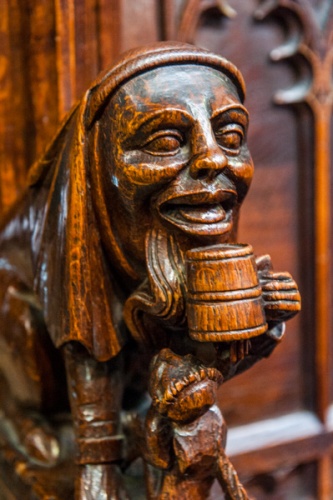 Look for a stone slab against the wall that marks the grave of Ranulph Higden (d 1364). Higden was a Benedictine monk at St Werburgh's abbey and the author of 'Polychronicon', a long chronicle, or general history that enjoyed great popularity in the late medieval period. Over 100 hand-written manuscripts of the Polychronicon are known to exist.

There are four noteworthy chapels in the south transept. The colours of the Cheshire Regiment hang at the back of the four chapels. The Chapel of the Cheshire Regiment is dedicated to St George and features a reredos with a carving of St George slaying the dragon. To one side is the Chapel of St Nicholas and St Leonard. Both these chapels were designed by the famous Victorian architect Sir Giles Scott, the son of Sir George Gilbert Scott. 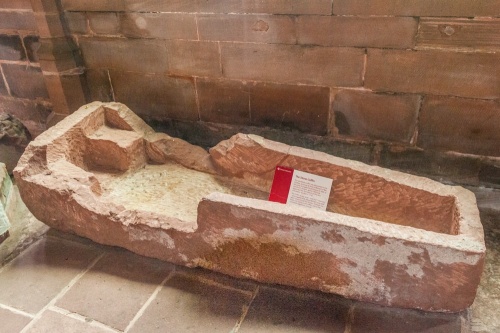 Another historical highlight is the Simon Ripley Stone, a huge stone slab in the shape of a truncated cross head. The stone was found under the floor of the chapter house in 1723, covering a stone coffin. The stone bears the emblem of a wolf's head and the initials 'SR' for Abbot Simon Ripley (1485-1493) who completed the rebuilding of the nave and central tower.

When the stone was lifted a skeleton was found in the coffin beneath, wrapped in black leather. Eighteenth-century antiquarians interpreted the wolf's head symbol on the stone as meaning that the skeleton was that of Hugh d'Avranche, who founded the Benedictine monastery and was buried here in 1101. Hugh's nickname was 'Lupus', Latin for 'Wolf'. If that is true, the stone was re-carved at the time of Abbot Ripley's death in the late 15th century.

Near the Simon Ripley Stone is a stone coffin found in the cloisters. It is thought to be the resting place of Richard of Bec, who came to England in 1092 with St Anselm and was named as the first Abbot of the new monastery. Abbot Richard (d 1116) must have been a very tall man for his time, for the coffin is 6'6" internally. No skeleton was found when the coffin was opened. 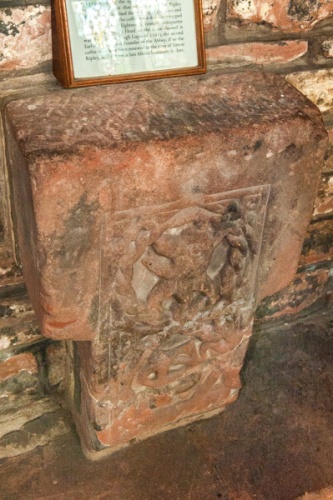 During the turmoil of Henry's Dissolution of the Monasteries, the 14th-century shrine of St Werburgh was broken up and her relics were scattered. Parts of the 14th-century stonework were rescued and used to reassemble the shrine which is now on display in the Lady Chapel at the east end of the cathedral. You can see the niches where medieval sufferers rested their heads while spending the night in a prayer for healing. 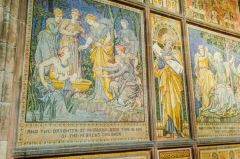 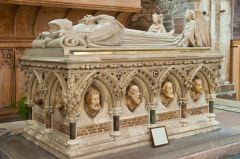 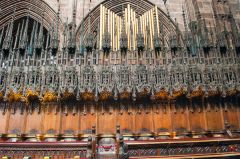 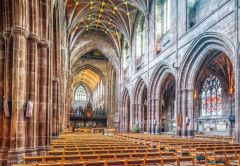 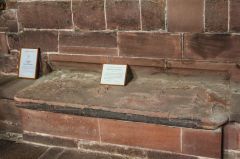 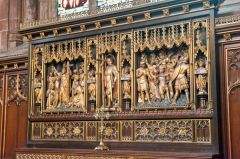 More self catering near Cathedral

More bed and breakfasts near Cathedral