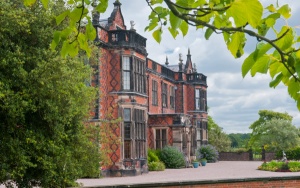 The Warburton family, Viscounts Ashbrook, have lived at Arley since shortly after the Norman Conquest. The location must have been a quiet rural estate then, but now the house is set in a patch of green a short distance from the M6 motorway.

The forerunner of the current Hall was begun in 1469, and it has been owned by the same family ever since. The house was built by Piers Warburton, who was probably responsible for the cruck-framed barn and outbuildings. The barn now houses a restaurant for visitors. The Hall was a quadrangular structure, set within a moat, but no trace of the moat can be seen today.

The medieval house was encased in brick around 1758 and remade as a fashionable Jacobean-style house. The medieval moat may have been filled in at this time. The grounds were remade as a landscape park, with a pleasure ground. The garden and park were redesigned in 1785-95 by William Emes.

Returning to the house, in 1835 Rowland Egerton-Warburton called in architect George Latham of Nantwich to completely update the Jacobean house as an Elizabethan fantasy. Eerton-Warburton was passionately interested in the Elizabethan period, and insisted that every detail of his new house be as accurate as possible and in keeping with the history of the Hall.

He was also moved to religious fervor by the Oxford Movement, and created a family chapel in richly ornamented Gothic style. His architect Anthony Salvin offered him a choice of different Gothic styles, but Egerton-Warburton opted to have them all, all at once. Each of the chapel windows is thus in slightly different style, representing a different period of architecture. 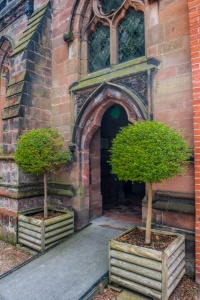 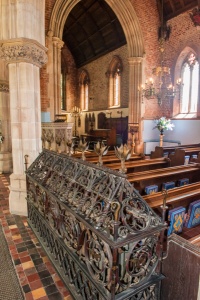 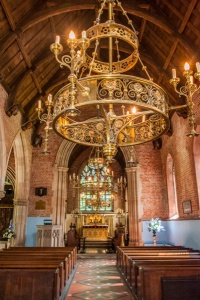 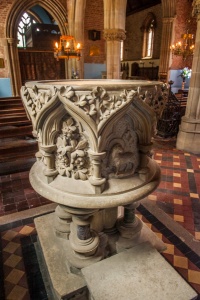 That same attention to detail, and fascination with the Elizabethan period that permeates the house interiors. The library in particular is a good example of Victorian Gothic style, with richly coloured stained glass windows flooding the large wooden bookcases with light. The front hall is in Jacobean style, with richly detailed panelling, and an elaborate ceiling with hanging pendants.

Napoleon III lived at Arley briefly, and his bedroom is preserved upstairs, with watercolours by Piers Egerton-Warburton decorating the walls.

Unfortunately a large portion of the rear wing and service court was pulled down in 1968, though these have been replaced in a similar style to the originals.

The gardens at Arley Hall were the site of one of the first herbaceous borders planted in England (by Rowland Egerton-Warburton once again). The current gardens extend to 12 acres ringed by hedges and brick walls.

The Tea Garden cottage boasts a fine collection of shrub roses, while two walled gardens provide space for open lawns, herbaceous borders, fruit trees, and kitchen produce. An avenue of pleached limes leads to the house, and nearby ilex trees are clipped into tall cylinder shapes. Woodland walks garden and a rock garden add interest to this award-winning horticultural experience.

A parterre was added to the formal gardens in 1850, and in 1856 the Furlong Walk, stretching 200 metres, was added on the south-eastern side of the gardens. Finally, a Flag Garden was built by Antoinette Egerton-Warburton in 1900, featuring floribunda roses and lavender. 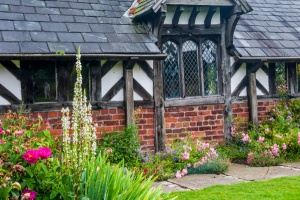 The 'Tea Cottage' in the garden 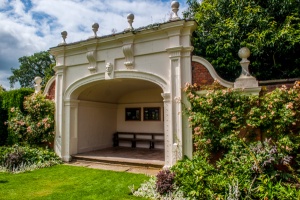 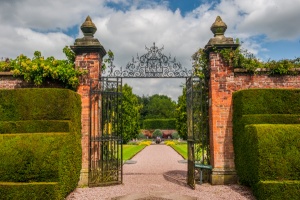 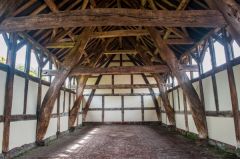 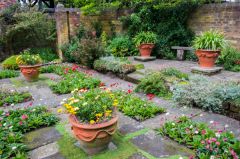 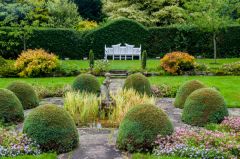 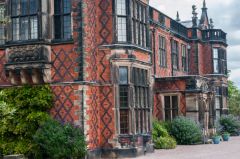 More self catering near Arley Hall