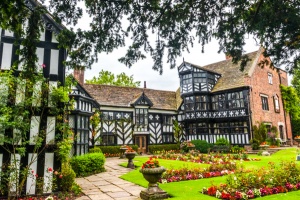 Gawsworth Hall began as a Norman manor, though that early house was replaced in 1485 by a half-timbered hall built around a courtyard. Part of the courtyard was later pulled down, leaving the house as an odd U-shape. The medieval hall may have been protected by a moat, but no trace of the moat remains.

The mound that once held the Norman house now boasts only the tiny chapel, built in 1369 and still in use, though it has been much remodelled, with Arts and Crafts stained glass by Edward Burne-Jones and William Morris.

The present house retains the Tudor half-timbering so often encountered in Cheshire houses, but the Elizabethan core has been heavily altered over the years. Part of the original Great Hall now survives as a drawing room, and in the library is a bookcase designed by AWN Pugin, the architect of the Palace of Westminster.

There are several secret priest's hiding holes upstairs, inserted during the 16th century, when Catholic priests were hunted down, and those who harboured them faced stiff penalties.

The house was the home of the Fitton family, whose fortunes sunk when Mary Fitton was exiled from the court of Elizabeth I for her love affair with the Earl of Pembroke. The Virgin Queen seems to have been more upset that Mary became pregnant by the Earl, rather than they had an illicit affair.

Mary Fitton has been proposed as the most likely candidate for Shakespeare's Dark Lady, immortalised in a series of sonnets by the Bard of Avon.

It is possible that Shakespeare was one of Mary's lovers, and his sonnets were a way of getting a measure of revenge for her duplicity. A portrait of Mary as a child hangs on the wall amid later portraits by Constable and Gainsborough

In 1712 an ongoing conflict over ownership of the Gawsworth estates between the Gerard and Fitton families culminated in a famous duel between Lord Mohun and the Earl of Hamilton. The duel, held in Hyde Park, London, resulted in the death of both men.

One later owner of the Hall was Samuel 'Maggoty' Johnson, a dancing-master and dramatist who was known as the last professional jester in the country. 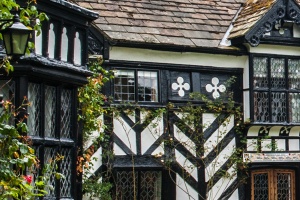 Outside the house are remnants of the Elizabethan pleasure grounds which once extended to 30 acres. Included in those grounds are the remains of the Tudor tilting ground, built by Mary Fitton's father in the hopes of a royal visit. The queen never did visit Gawsworth, but the gardens and tiltyard remain.

In July and August, the hall hosts regular outdoor theatre events, in fact, so popular have the events at Gawsworth become that it has been dubbed 'the Glyndebourne of the north'. A short stroll from the Hall is the wonderful parish church of St James, decorated with grotesque carvings and housing the tomb of Mary Flitton. Almost beside the Hall is Gawsworth New Hall, a Georgian house begun by the Lord Mohun 1707.

We came when the Hall was preparing to host an outdoor play, so there were pavillions going up in the grounds, and the play's director testing the sound system. It made a curious counterpoint to the historic house, but it is so good to see houses like Gawsworth being used and appreciated rather than simply crumbling into decay.

And there is a lot to appreciate! The interiors were simply bursting with period furniture and reminders of the long residence here by the Flitton, Gerard, and Stanhope families. There were helpful guides, but for the most part, we were free to wander and enjoy.

Gawsworth is a curious house; all full of angles and projections, like a child's lego concoction that seems to defy logic. Oh, but it has charm! Wander around the side of the house from the main visitor entrance and you find yourself in a small private garden around part of the original courtyard, and here the effect is pure Elizabethan timber-framed glory; a very theatrical facade, with dark timber beams overlooking a small garden bursting with summer colour. The effect is wonderful, and a reminder of the age of this fascinating house. 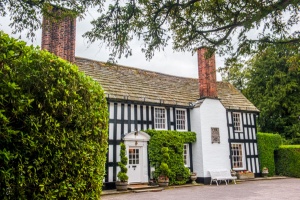 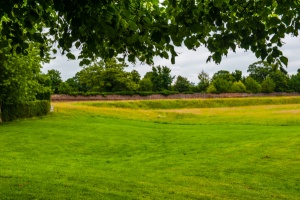 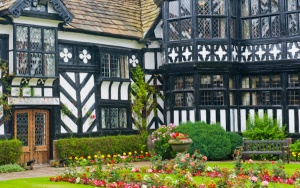 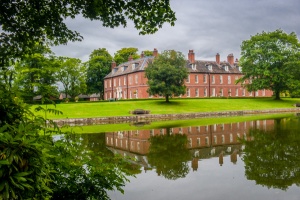 The view to Gawsworth New Hall 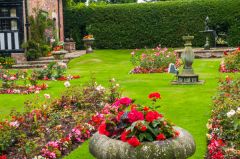 More self catering near Gawsworth Hall