HERITAGE HIGHLIGHTS:   Does a lost royal treasure lie in a hidden chamber beneath the castle, as legend tells? 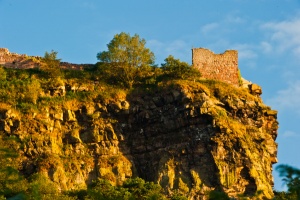 The striking ruins of this 13th-century castle stand on a 500-foot high cliff of red sandstone, providing excellent views of the surrounding countryside. The site was first used as a fortress in the Bronze Age, and traces remain of that early hill fort.

The castle was begun in 1226 by Ranulf, Earl of Chester (1170-1232), in a quite peculiar (for England) Saracen style. Ranulf was heavily influenced by the defences he encountered in Syria during his time on Crusade. In particular, the castle bears a heavy resemblance to the fortress at Sahyoun.

Ranulf died in 1232, long before the construction of Beeston was complete. His son John inherited Beeston, but John, too, died soon after, and the castle passed to the crown. Henry III used Beeston as a garrison and prison during his wars in Wales. Around 1303 Edward I strengthened the defences, but after that, it gradually fell into disuse. 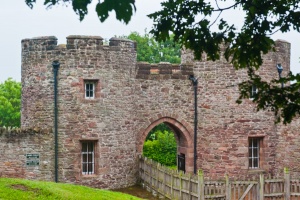 The castle is surrounded by two sets of perimeter defensive walls, and the inner wall is pierced by a very imposing gateway. In the Civil War Beeston was a royalist stronghold, and it held out against a 12-month Parliamentary siege until starvation forced the garrison to concede defeat. In 1646 the defences of Beeston were intentionally demolished by Parliamentary order.

Persistent legend tells that a vast treasure was hidden at Beeston by Richard II. The story goes that Richard chose Beeston to hide his personal fortune of “100,000 marks in gold coin and 100,000 marks in other precious objects” before he went on a trip to Ireland in 1399.

On his return, he was captured and eventually killed by Henry Bolingbroke, Duke of Lancaster (later Henry IV). Richard never had a chance to recover his treasure, and no one knew where it had been hidden. 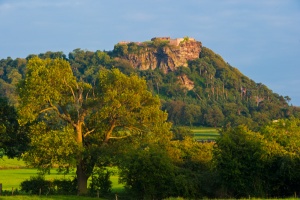 One story tells that the gold was hidden in passages running off the 370-foot deep castle well in the inner bailey. Attempts to probe the well using sophisticated electronic measuring devices revealed at least 3 passages, but no treasure, though investigators conjectured that a fourth passage remains to be investigated.

Beeston is fascinating for what it shows about castle building; there is no keep here, for military architecture had moved on from the Norman model. Instead, the entire site is encircled by a strong curtain wall punctuated by smaller towers, following the natural contours of the hillside. Even though only the wall on the eastern side remains intact, there are still seven towers along it, so the original wall must have been enormously impressive.

At the highest point of the hill is the inner ward, protected by another thick stone wall and round flanking towers guarding a gatehouse. The curtain wall is badly damaged, as are the 3 D-shaped towers which face the ditch. On the opposite side of the inner bailey, the walls are not nearly so impressive, but then, they didn't need to be, for here the hill falls away abruptly in a sheer cliff.

The entrance gates to Beeston look authentic, but they are Victoria additions, set at the base of the hill. From there, visitors have to walk up a fairly steep incline, through extremely impressive stone walls that encircle the site. A trail leads up an open hillside to the castle itself, which is protected by a dry ditch cut into the solid rock.

Thankfully, a modern footbridge crosses the ditch and leads through a large gateway into the castle courtyard. Most of the castle remains inside the courtyard are ruinous, though the well cut straight down into the rock is impressive.

The views are amazing, looking out over the Cheshire Plain and into Wales. Easily visible on the neighbouring hill is what looks like another castle, like a twin to Beeston, but it is a Victorian Gothic fantasy, Peckforton Castle, now a hotel. 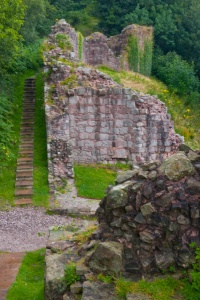 The inner bailey wall
and tower base 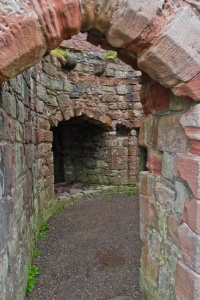 A passage in
the inner bailey 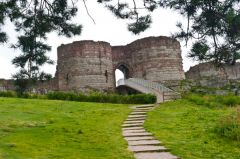 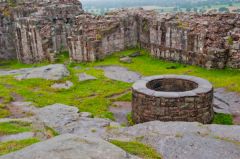 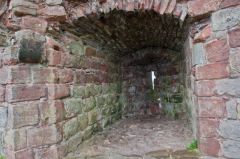 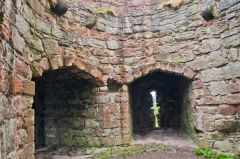 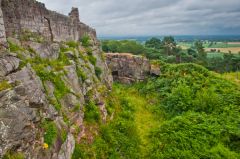 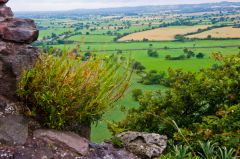 More self catering near Beeston

More bed and breakfasts near Beeston