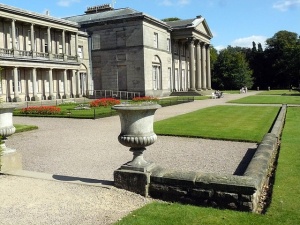 One of the premier stately homes of Cheshire (and indeed of all England), Tatton Park offers not one but two houses to visit. The first is a Tudor Old Hall, begun in 1520 by Sir Richard Brereton, and later purchased by Sir Thomas Egerton, who built the nearby mansion.

Egerton was later to become Lord Chancellor of England. The Old Hall was converted into cottages in the 17th century, and it now hosts regular educational programs and events such as Shakespeare plays.

A counterpoint to the Old Hall is the elegant Georgian mansion begun in 1716 and rebuilt periodically throughout the Georgian period as fashions changed. Much of the house we see today belongs to the 1780s and was designed by Samuel Wyatt and his nephew, Lewis Wyatt. The formal front facade is understated, but the same cannot be said for the garden facade, a late Palladian extravagance in grey stone.

Egerton also called in Humphrey Repton, one of the foremost exponents of the English landscape gardening style, to lay out the extensive garden and parkland surrounding the house. In 1791 work on the house stopped abruptly, for no discernable reason, and Wyatt's interiors were left half-finished.

Building did not resume until 1808 after Wilbraham Egerton had succeeded his father. Wyatt had died in the interim, so the work was finished by his nephews Lewis and Jeffrey. Lewis Wyatt added an Orangery and Triumphal Arch for Wilbraham Egerton, but it is the interiors that show in a grand fashion the Wyatt's flair for style. Lewis Wyatt worked on Tatton Park for a total of 17 years, gradually refining and embellishing his uncle's original designs. 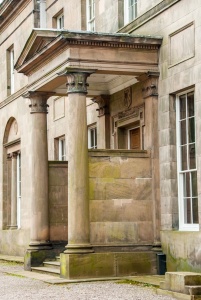 A later Wilbraham Egerton was one of the major supporters of the Manchester Ship Canal Company, and his success as a society host led to a visit by the Prince and Princess of Wales in 1887.

Egerton maintained a reputation for hosting lavish parties, and lived life at Tatton in grand style, employing some 24 gardeners alone just to keep the grounds in order. But the days of the grand country house were numbered, and today Tatton Park is cared for by the National Trust.

A guided tour takes visitors from the neo-classical Entrance, through the Music Room, Drawing Room, Library, and Dining Room, then on to ornate family quarters and finally a visit to the "below stairs" world of the family servants. Of special note is the cellar railway for carrying coal! This was made necessary because the house was so vast.

The staterooms are filled with fine art and furniture amassed by the Egerton family over centuries. Of particular interest is a large collection of furniture by Gillow. The grand entrance hall is a Greco-Roman delight, with a coved ceiling supported on columns of porphyry. The centre of the house is a staircase hall, with a suite of rooms clustered about it.

The staircase is decorated with portraits of The Cheshire Gentlemen, a group of ten wealthy local landowners who gathered to discuss whether to support the Jacobite Rising of 1715. They decided against the move - just as well considering how that venture unfolded! Perhaps most impressive is the Library, which houses over 8000 books, most of the of historic interest.

The Egerton family did not remodel their old gardens when a new garden style took their fancy; instead, they enclosed more parkland to build a new garden space! Thus the gardens at Tatton are a curious mix of styles from varying time periods, each with its own peculiar charm.

There is a walled kitchen garden, beech maze, conservatory (1818), a fernery designed by Joseph Paxton, the architect of the Crystal Palace, and an Italian garden. In addition, there is a rose garden, topiary, Leech Pool, and Japanese Garden. 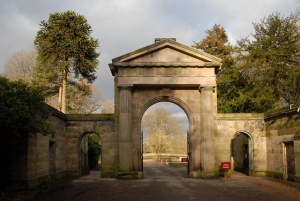 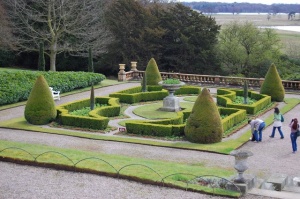 Photos are copyright as noted. All except house the entrance photo are republished with gratitude under a Creative Commons license

More self catering near Tatton Park

Self Catering near Knutsford