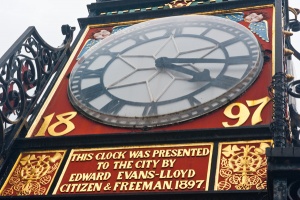 The Eastgate Clock was erected to celebrate Queen Victoria's Diamond Jubilee in 1897. The idea of a memorial of some sort to commemorate the Jubilee was mooted about as early as 1896 when the Duke of Westminster suggested a gesture to support the Queen's Jubilee Institute of Nurses. Ideas ranged from a clock on the City Hall to a statue of the queen in Town Hall square.

A public appeal for funds was launched, and subscribers were asked to donate funds for an Institute of Nurses, a memorial tower, or a clock on the Eastgate. Public opinion favoured the first two proposals, but a concerted effort by proponents of the clock raised the necessary funds.

A design by John Douglas was approved in March 1897. Douglas planned for a stone clock, but it was feared his design would block light to neighbouring buildings. After much public debate, the stone clock design was cast aside in favour of a metal structure.

The inner works of the clock were donated by city solicitor Edward Evans-Lloyd, who also provided the clock face. The supporting structure was paid for by the money donated by the public, and the city agreed to be responsible for maintaining the clock.

Apparently public opinion was divided over the clock design - some thought it overly fanciful, even garish, and out of step with its surroundings. However, over the course of time, the Eastgate Clock has become one of the symbols of Chester. 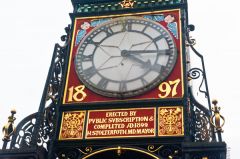 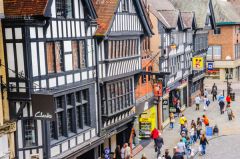 More self catering near Eastgate Clock