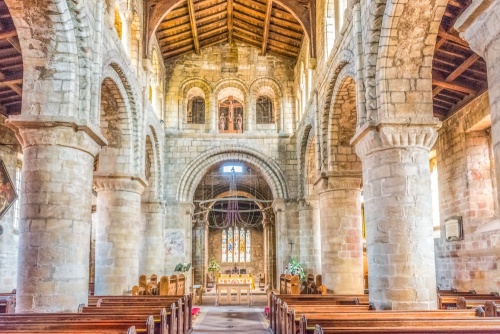 The parish church of St Michael and St Mary has graced the Derbyshire town of Melbourne since the 12th century, but there has been a church here since the late Saxon period. That first church was recorded in the Domesday Book of 1086 but no trace of it remains today.

The magnificent building we see today has been called a 'cathedral in miniature', but why was such a grand church built in a small Derbyshire town?

Two theories have been suggested over the years. The first is that Melbourne was used as a retreat by the powerful Bishops of Carlisle when they were forced to flee their northern see due to Scottish raids. We do know that Henry I presented the church to Aethelwulf (Adelulf), the first Bishop of Carlisle, in 1133. The Scots captured Carlisle in 1136 and it was assumed that the Bishop fled south to Melbourne for safety, and there built - or rebuilt - a church suited to his status. 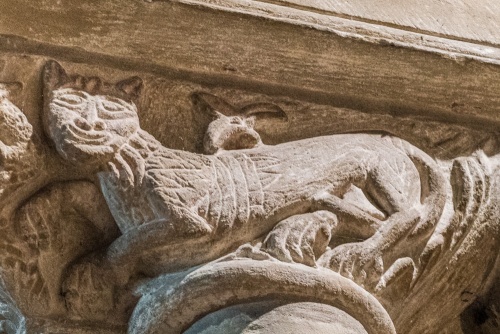 Unfortunately, the facts don't seem to support this theory; it seems much more likely that Bishop Aethelwulf stayed in Carlisle and served as a Scottish bishop after the city was captured.

A more likely theory is that St Michael and St Mary was built as a royal church by Henry I (1100-1135) as part of his royal manor of Melbourne. So it would already have been essentially as we see it today when Henry gave it to Bishop Aethelwulf in 1133.

The elaborate west end of the church supports this theory; a gallery is built over the west end and extends along both sides. Walkways extend around all four sides of the crossing tower and connect to an upper chancel at the east end. This 'two-storey' construction is very unusual. It suggests that the west gallery served as a royal pew and the upper chancel was reserved for the king. 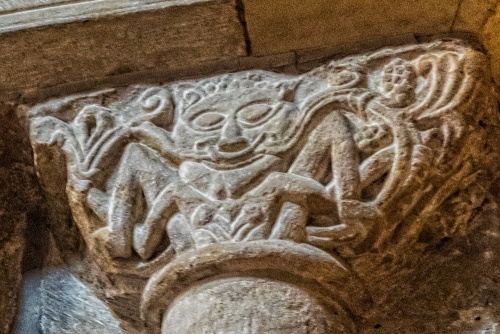 The west end of the church is topped with two towers, giving the church three towers in all. This is almost unheard of for a simple parish church. The east end originally had a triple apse (rounded ends), another elaborate feature for the period. You can still see the rounded arches of these 12th-century apses on the exterior wall.

Entrance is through the south door. The doorway arch is relatively plain but the pillars on either side have interesting carved capitals. One of the capitals depicts a splay-legged male figure known as a 'luxuria', a depiction of the sin of lust. Another more worn luxuria is on a capital of the west doorway arch.

There are more beautifully carved capitals inside the church. Most of the nave capitals are fairly plain but those at the west end are carved with rams heads and small crosses. Also at the west end of the church is a plainly carved 12th-century font. 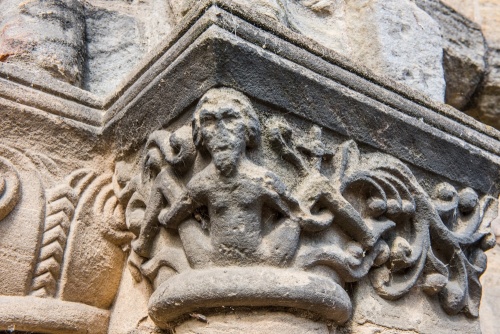 The crossing arches have elaborately carved capitals. One capital is carved with a grinning figure that resembles a leopard. This is known as The Melbourne Cat. On the opposite capital is a figure of a man pulling on a dog's tail.

Next to it is a sheela-na-gig; a female figure displaying her genitals, with foliage emerging from her mouth. The sheela-na-gig is generally thought to be a pre-Christian symbol of fertility.

On the north side of the transept arch is a vividly coloured wall painting depicting a demon above two arguing women. Each woman has a smaller demon on her back. The painting dates to the 13th century. The entire wall was originally covered with a larger painting, but this was scraped clean during the Victorian restoration. This section of the painting was preserved only because it was hidden behind a wall plaque. 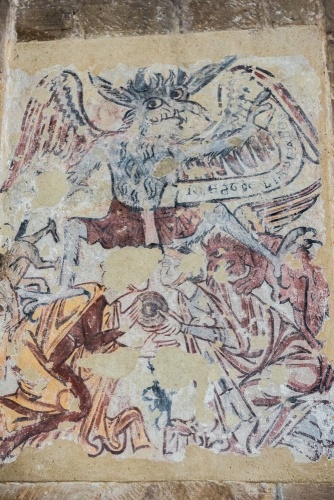 13th-century wall painting of a
demon and arguing women

The nave roof is Victorian but the chancel roof dates to the 16th century. In the chancel is a slate and marble memorial to Rev Middleton (d. 1830) and in the crossing is a small memorial to Frank Elms (d. 1914). There are several 19th-century wall tablets to the Cantrell family in the north transept chapel, but the oldest memorial by far is a 14th-century tomb niche in the south transept. A worn effigy lies within the niche.

Also in the south transept are 3 early 17th-century monuments to the Hardinge family. Under the north tower is a 13th-century stone coffin lid from a child's coffin. In the south aisle is a painted stone monument to William and Isobel Dawson (d. 1614). 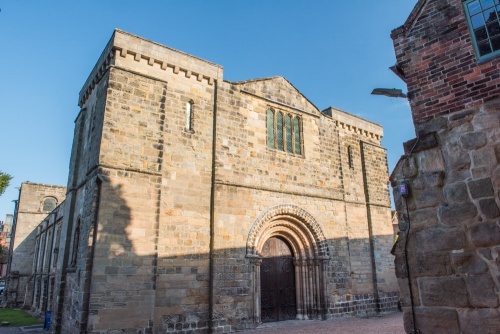 The nave and chancel walls are hung with six funeral hatchments of the Coke/Melbourne family of Melbourne Hall. In the west aisle hang the flags of Australia and Melbourne, a reminder that William Lamb, Lord Melbourne, was Queen Victoria's Prime Minister when the province of Victoria was established, with Melbourne as its capital. Near these flags is a Royal British Legion flag, a reminder that the Melbourne branch of the Legion is among the oldest in Britain.

The church is usually open daily and is well worth a visit. Immediately outside the west end of the church is a 14th-century tithe barn and opposite the east end is the entrance gate of Melbourne Hall. 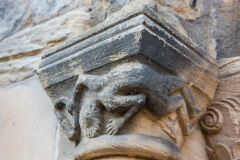 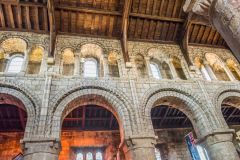 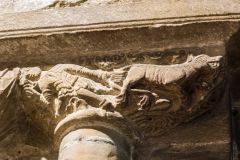 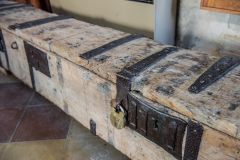 Self Catering near Melbourne