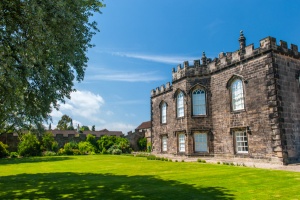 For over 900 years Auckland Castle served as the principal country residence of the powerful Prince Bishops of Durham. First established as a hunting lodge, it grew to become a comfortable mansion for the Bishops, who for centuries were virtual rulers of a vast swath of land in the north-east of England.

The castle served as the official bishop's residence from 1832 until 2012 when it was taken over by a charitable trust with the aim of restoring the historic buildings and grounds to serve as a permanent venue for exhibitions focussing on the history of Christianity in Britain.

The term 'castle' might evoke images of drawbridges and bristling battlements, but in truth, Auckland Castle is more like a comfortable country house. It had its roots as a manor house built by Bishop Pudsey in 1183. The manor was converted into a grand castellated residence by Bishop Bek, who was fond of his hunting and wanted a suitable residence near his hunting grounds.

One of the most interesting features at Auckland Castle is a collection of works by the Spanish painter Francisco de Zurbaran (1598 – 1664). There are 13 paintings in all, portraying Jacob (Israel) and his Twelve Sons, one for each of the twelve tribes of Israel. Together the Zurbaran paintings make up one of the most important religious works of art in Europe.

They were painted between 1640-1644, shortly after King Philip of Spain had proclaimed Zurbaran the 'king of painters'. They were purchased in 1756 by Bishop Richard Trevor (1752 – 1771), who used 125 pounds of his own money to buy them. He was outbid at auction for the final painting ('Benjamin') by the Duke of Ancaster, so the Bishop immediately commissioned Arthur Pond to paint an exact copy made to complete the set. 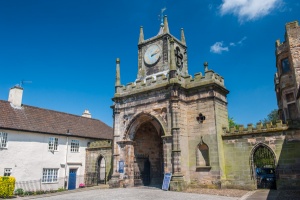 On the surface, this is purely the act of an art aficionado, but times were different then, and the paintings were seen as a celebration of Muslim and Jewish as well as Christian faith at a time when Parliament had just repealed the Jewish Naturalisation act.

Bishop Trevor's purchase of the Zurbaran paintings was an act of defiance and a proclamation of his political as well as religious views; and a very unpopular plea for understanding and religious tolerance at a time when not many of his countrymen were disposed to either.

Bishop Trevor redesigned the Long Dining Room at Auckland Castle to house the set of paintings, creating in the process perhaps the first gallery created to display a single set of paintings.

The original medieval chapel at Auckland Castle was built in the 13th century by Bishop Beck. During the religious turmoil of the Commonwealth period that followed the English Civil War, the castle was in the hands of Sir Arthur Haselrig, a prominent Parliamentary leader. Sir Arthur pulled down the chapel and used the stones as a building material for a new mansion within the castle grounds. 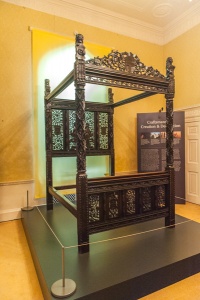 Before the mansion could be finished King Charles II was restored to the throne, and the Bishops of Durham regained possession of the castle. Bishop John Cosin tore down Haselrig's unfinished mansion house and converted the 12th-century banqueting hall into a new chapel.

This was consecrated on St Peter's feast day in 1665. It is one of the largest private chapels in Europe, notable for its 19th-century reredos; a combination of Frosterley marble and carved oak.

One of the historic highlights at Auckland Castle is a beautifully carved oak bed, known as The Paradise Bed, possibly the only original piece of furniture to survive from the Tudor palace of Westminster. The origins of the bed are a subject of academic debate, but it may have been made to celebrate the marriage of Henry VII to Elizabeth of York. If so, it is the only royal bed to survive from the Tudor period.

The headboard is decorated with likenesses of the reigning couple in the guise of Adam and Eve. Richard Foxe, Bishop of Durham from 1494-1501 was a staunch supporter of Henry Tudor's claims to the throne and fought beside Henry at the pivotal Battle of Bosworth in 1485. The Paradise Bed has been featured in a BBC4 radio documentary called 'The King's Lost Bed'. 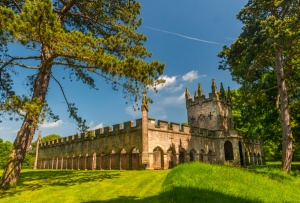 This late Georgian extravaganza is an 'eyecatcher', or folly, built in 1760 in Gothic Revival style to provide shelter and a feeding station for deer, with a viewing room so that visitors can watch the deer. It stands within an 800-acre park, where the Prince Bishops used to hunt.

The Deer House is in the care of English Heritage and has separate opening times from the castle. The park itself was converted into a sweeping landscape garden in the 18th century, with wide vistas and winding drives amid a woodland landscape, with the River Gaunless winding through it.

Another unusual feature inside the castle grounds is the Scotland Wing; a long, low range dating to at least the 16th century. The name suggests that it may have been used to house Scottish prisoners of war. When the castle was in the hands of Sir Arthur Haseling during the Commonwealth this wing was used as a granary. 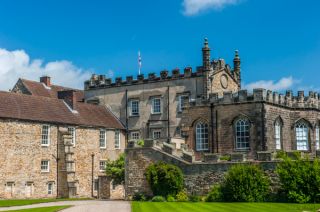 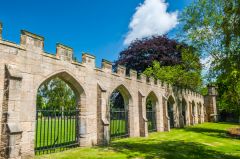 More self catering near Auckland Castle

Self Catering near Bishop Auckland