HERITAGE HIGHLIGHTS:   The historic castle and cathedral stand opposite each other 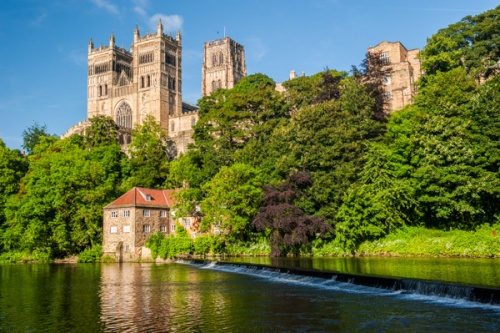 Durham and the River Wear

Durham is a historic city in a loop of the River Wear, and the county town County Durham. It is home to Durham Cathedral and Castle, which together have been declared a UNESCO World Heritage Site.

The city's name comes from the Celtic word 'dun', for a hill-fort, and the Norse word 'holme', meaning an island. A more fanciful story of the city's origin comes from the legend that monks from Lindisfarne were led to the site by a dun cow (a cow coloured a dull brown or grey). The year was AD 995, and the monks were carrying the body of St Cuthbert, which they had saved from destruction by Viking raiders.

The monks settled at Dun Holme, a high rock bounded on three sides by the River Wear. There they built a shrine to shelter St Cuthbert's relics. This shrine, or shelter, grew to become Durham Cathedral. St Cuthbert's Shrine became the most important religious site in England until the martyrdom of Thomas Becket at Canterbury in 1170. 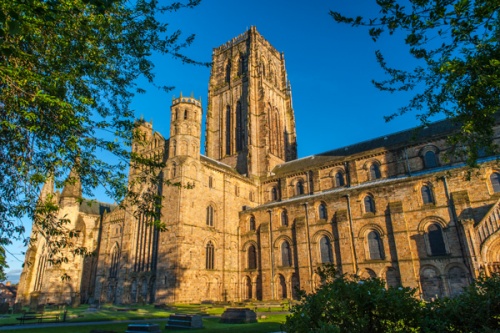 The Anglo-Saxon scholar Bede was buried at Durham Cathedral, and his shrine added to Durham's allure for medieval pilgrims.

Durham's proximity to the Scottish border made it an important buffer territory. Monarchs in London were keen to have a strong military presence in the region so they granted the Bishops of Durham an extraordinary range of temporal powers.

The 'Prince Bishops' were both religious leaders and secular rulers, exercising enormous power over their realm within a realm. They could appoint their own sheriffs and justices, levy their own taxes, even raise their own armies. They were, to all intents and purposes, rulers with the power of a king. 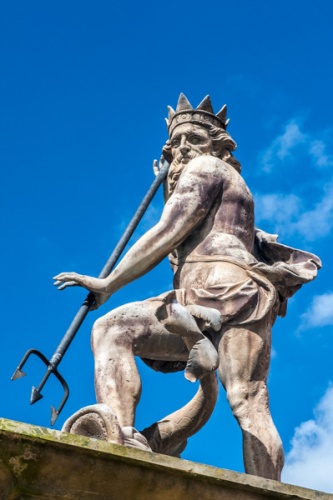 Statue of Neptune in the Market Place

The Anglo-Saxon cathedral erected by the monks from Lindisfarne was replaced in 1093 by the 2nd Bishop of Durham. The result is perhaps the most perfect example of Romanesque architecture in Britain.

You enter through the north door, which boasts an extraordinary medieval sanctuary knocker in the shape of a face inside a sunburst.

The architectural highlights of Durham Cathedral are the extraordinary Romanesque pillars of the nave. These are among the most striking examples of early Norman architecture in England. St Cuthbert's relics were scattered at the Reformation but you can still see the tomb of the 8th-century historian The Venerable Bede, who is buried in the Galilee Chapel at the western end of the Cathedral. 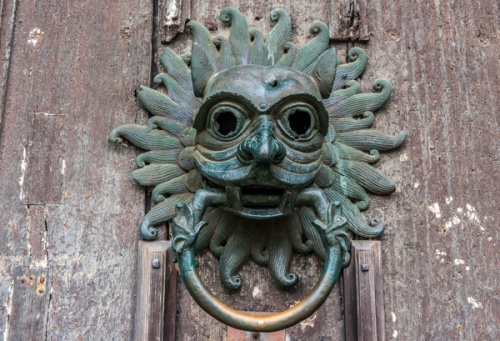 Opposite the Cathedral on a high cliff above the River Wear is Durham Castle, one of the earliest castles built by William the Conqueror during his 'Harrying of the North' following a rebellion against Norman rule.

Begun around 1072 it is an excellent example of a traditional Norman motte and bailey design, with a tower keep atop a high manmade mound, set within a walled enclosure.

The castle now forms part of Durham University and you can take an excellent guided tour led by a student. Highlights include the medieval great hall and castle kitchens, and the Tudor chapel. 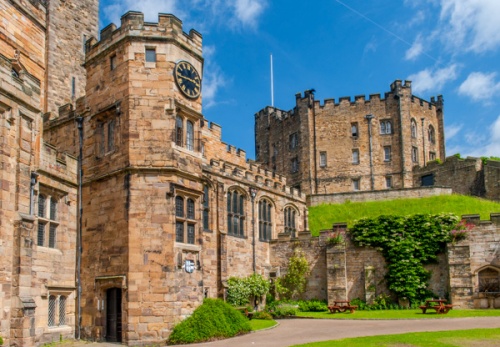 On the outskirts of Durham, yet easily reached by a delightful riverside walk, is Crook Hall, a medieval manor house set in a beautiful garden. The Hall dates to 1286, but only the great hall and screens passage remain from that 13th-century building.

Crook Hall is rumoured to be haunted by several ghosts, one a 'white lady' who glides down the staircase on St Thomas' Eve. Outside the house is a secret garden established over 700 years ago, and a Georgian walled garden.

Durham's Town Hall and Guildhall complex occupies the west side of the Market Place. The Guildhall was begun in 1356 as a gathering place for the powerful merchant guilds that administered local government. It was rebuilt several times over the centuries and what we see today is a mix of 17th-century architecture with a Victorian council chamber.

In the Town Hall is a richly carved Jacobean chimneypiece and overmantel. Learn about the role of the Prince Bishops over the centuries and discover fascinating local characters like Jozef Boruwlaski (1739-1837). Known as 'The Little Count', Boruwlaski stood just 3'3" tall. 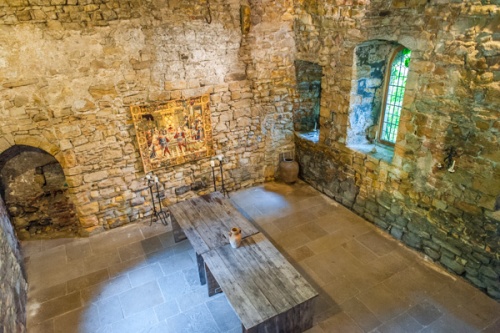 The medieval hall at Crook Hall

There is more to the world Heritage Site than just the Cathedral and Castle; the Cathedral Quarter holds a wonderful array of historic buildings, many clustered along North Bailey and South Bailey. On North Bailey is Hatfield College, the second-oldest college in the University of Durham. The college is named for Bishop Thomas Hatfield, who built the castle keep in the 14th century. You can see his elaborate tomb in the Cathedral.

Also on North Bailey is Allington House, built in the 17th century and later the home of architect Ignatius Bonomi.

At 12 South Bailey is a 17th-century residence owned by the St Cuthbert Society, just one of several Jacobean buildings along the street. 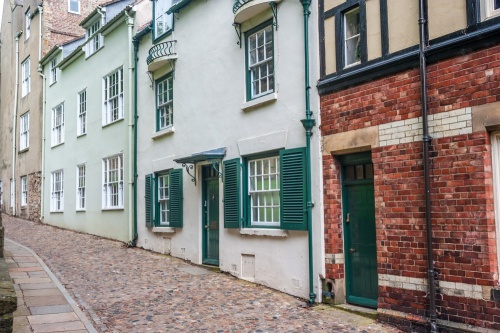 Stretching between the Cathedral and Castle is Palace Green, Durham's original medieval market place. On one side of the Green are Cosin's Almshouses, built by Bishop Cosin in 1666 on the site of a 15th-century grammar school. The almshouses provided residences for four men and four women, as well as a song school and grammar school.

Nearby is the Pemberton Building, erected in 1929 in Tudor style. It is home to the Durham Union Society, established in 1842 and thus one of the oldest student debating societies in the world.

Then there is Cosin's Hall, a Georgian building built to serve as an Archdeacon's Inn. Moneyer’s Garth is a Victorian building on the site of a 12th-century mint established by Bishop Geoffrey Rufus in 1135.

Much older is Palace Green Library, a cluster of historic buildings based around the 15th-century Exchequer Building, the only one of the Prince Bishops' administrative buildings still intact. The Master's House dates to 1712 and has been the home of the masters of University College since the 1860s. The Music School's performance hall was built in 1541 as a grammar school and rebuilt in 1661 by Bishop Cosin. 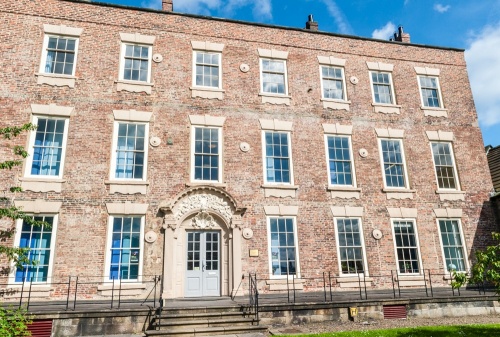 A stone's throw from the Cathedral is the Durham Museum and Heritage Centre, occupying the redundant medieval church of St Mary-le-Bow. The church boasts outstanding Georgian furnishings including panelled wainscotting and a beautifully carved rood screen.

You can learn about the history of Durham, the Cathedral, and the Castle at the World Heritage Site Visitor Centre on Owengate. The Visitor Centre is housed in a restored Victorian almshouse built in the 1830s to replace a 17th-century almshouse. A plaque commemorates Bishop John Cosin, who built the first almshouse on Palace Green. 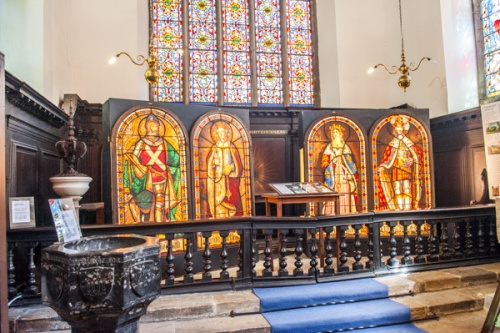 Three stone bridges span the River Wear at Durham. The oldest is the Elvet Bridge, begun around 1160 by Bishop Pudsey and retaining one of its 12th-century arches Then next is Framwellgate Bridge, built around 1400 to replace an earlier 12th-century bridge built by Bishop Ranulf Flambard. 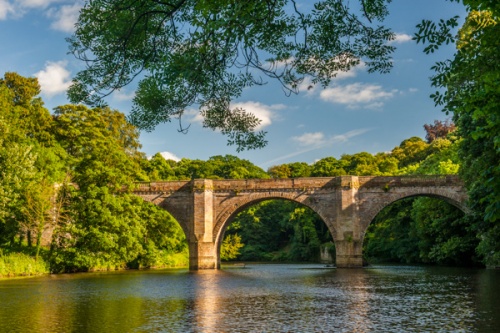 Just three miles from the city centre is Finchale Priory, a ruined 13th-century Benedictine monastery built by the monks of Durham on the site of a 12th-century hermitage built by St Godric. The priory later served as a rural retreat for the monks, a chance to get away from the bustle of city life in Durham. The major buildings date to 1237.

Durham is on the A690, accessed from junction 62 of the A!(M). There are several large public car parks in the city centre but for tourism purposes, we recommend using the park and ride system. There are P&R stops at Sniperley (DH1 5RA), Belmont (DH1 1SR), and Howlands Farm (DH1 3TQ). 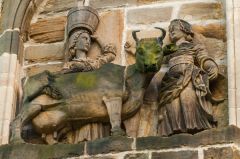 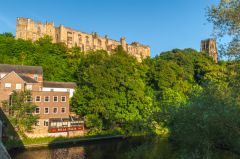 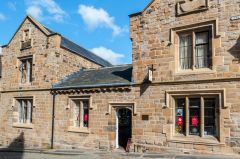 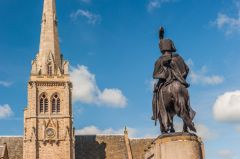 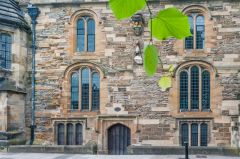 More self catering near Durham

More bed and breakfasts near Durham