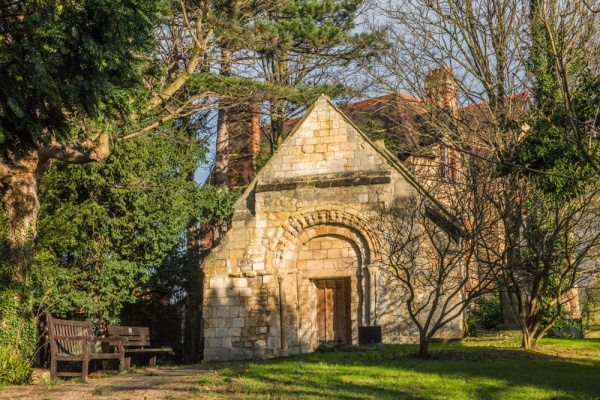 In a small public park beside London Road, on the eastern fringe of Gloucester, stands the remains of a 12th-century leper hospital, one of the oldest and most intriguing historic buildings in the city.

St Mary Magdalene's Hospital was founded around the middle of the 12th century to aide female lepers. We know very little about its early years, but we do know that in 1599 Elizabeth I gave it to the mayor and corporation of Gloucester.

The mayor and council must have done a poor job of running the hospital, for just 13 years later, in 1612, James I set up a new board to govern the hospital, and granted £13 per year from his own purse. This sum was known as 'King James' Pension'. 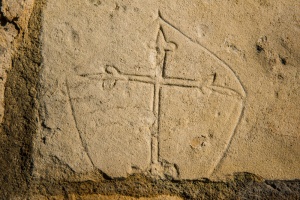 To the left of the west doorway a number of fascinating figures are carved into the stonework. Some are easily recognisable, others are an intriguing mystery. The symbols may have been carved by pilgrims and represent various saints days and religious festivals.

The interior of the chapel is much altered. when the nave was pulled down in 1861 the old south and west doorways were taken down and reassembled within the chancel. The south doorway in particular exhibits beautiful carving detail, with flowers and rosette decoration amid cable and pellet symbols. The most interesting historic feature is a life-sized 13th century effigy of a woman. The effigy was brought here from a demolished chapel dedicated to St Kyneburgh (Cyneburh), which stood near the south gate to Gloucester. Kyneburgh was a Saxon princess, the daughter of King Penda of Mercia, who died around AD 680. Tradition says that the effigy represents Kyneburgh herself.

There were at least three hospitals in Gloucester during the medieval period. Of these, the leper hospital is the one about which the least is known. The others were St Bartholomew's, built during the reign of Henry II near the west bridge across the Severn, and the hospital of St Margaret and St Sepulchre, founded around 1150 on what is now London Road. The latter hospital is still in existence as the chapel of the United Almshouses.

In 1867 Hillfield House was erected near London Road to replace an early 19th-century house. The extensive gardens of Hillfield House were opened to the public as a park in 1933. Aside from the leper chapel there two other historic buildings in the Gardens; the medieval King's Board, and the 17th century Scriven's Conduit.

Hillfield Gardens is within an easy walk of central Gloucester. There is no dedicated parking for the gardens, but we found a spot on a nearby residential side street off London Road. The garden is open at any time.

Unfortunately, the chapel is usually locked, but it is generally open for Heritage Open Days, which usually falls in early September. It is still worthwhile viewing the chapel, King's Board, and Scriven's Conduit, even if the chapel is closed.

NB. If you do a search online for 'St Mary Magdalene Leper Hospital' you are very likely to find websites about the leper hospital of a similar name near Cambridge, Cambridgeshire. Make sure you know which historic building you are reading about before making a visit! 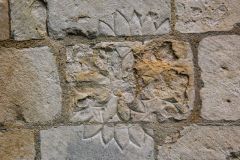 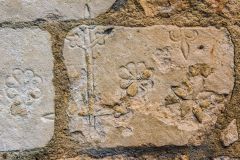 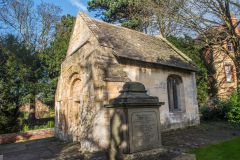 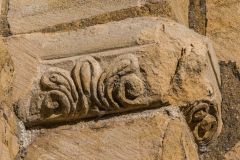 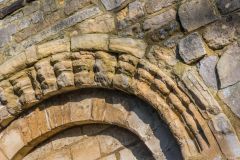 The King's Board - 0 miles (Historic Building)