The King's Board, Gloucester 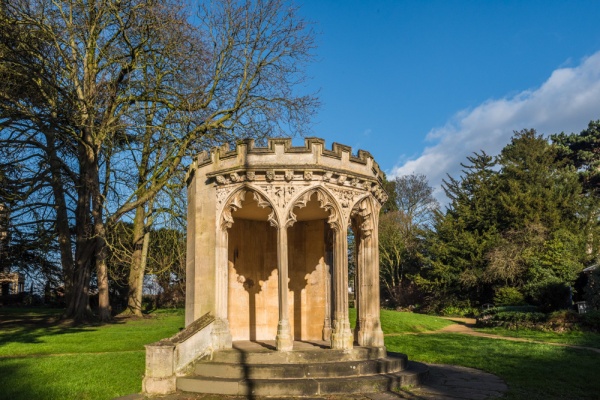 There are 3 historic monuments clustered in Hillfield Gardens, on the eastern fringe of Gloucester. One is the chapel of a 12th-century leper hospital, the second is a 17th-century conduit house known as Scriven's Conduit, and the third is ... well, how would you describe the King's Board? A medieval garden gazebo? A folly? In truth, no one knows quite what the King's Board was meant to be.

The Board is a peculiar structure that looks, well, like a multi-sided gazebo, decorated with exceptional medieval carvings.

The King's Board was originally erected in the late 14th century, where Bull Lane joins Westgate Street. Recent archaeological investigation on the site discovered the foundations of a rectangular structure. Tradition suggests that it was a gift to the city of Richard II (1377-1399), though it is possible that King Richard merely gave money to repair an existing structure, which would make the King's Board even older. The oldest documentary evidence comes from 1455.

The peculiar name uses the term 'board' in the sense of a table, as in the modern terms 'room and board' or 'board and lodging'. 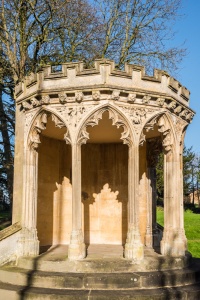 The King's Board from
the south west

But what was it used for?
Here is where the mystery deepens, for in truth we don't know. It could have been a common preaching cross, which makes sense because the exterior is decorated with carvings depicting the life of Christ. It could have had a more prosaic purpose, such as a coin exchange. In the reign of Elizabeth I it was used as a cheese and butter market.

Then in 1693 the Board was altered to serve as a cistern, holding water pumped from the River Severn. The original pyramidal roof was taken off, as were carved heraldic figures on the parapet.

Road improvements in 1750 meant that the structure, by then an ancient monument, was an obstruction. It was dismantled and re-erected in the gardens of Marybone House, home of the Hyett family, on the site of Gloucester's Norman castle. In the 1780s the site was needed for a new gaol, so the monument was moved once more, and erected in the grounds of a dwelling on Barton Street.

In the Victorian period the entire monument was purchased by WP Price and re-erected once again, in the gardens of Tibberton Court. There it stayed for a century, until in 1937 it was dismantled and moved yet again, to be erected on its current site in the middle of Hillfield Gardens, a public park on the eastern edge of the city.

Now with all the times the King's Board has been dismantled and re-erected over the centuries it has been altered in style and shape. In its current form, it is an 18th-century decagonal structure made with 14th-century architectural details. It is built of limestone ashlar with a flat roof. On the south side there is an open arcade of five bays rising above wide stone steps, while the north wall is solid ashlar.

The spandrels above the arcade columns on the south side are filled with exquisitely detailed 14th century carvings in bas-relief. Each spandrel depicts a scene from the life of Christ. Scenes include the Entry into Jerusalem, the Last Supper, and the Resurrection. The carving detail is exceptional, so crisp and clean that at first I took it to be a Victorian copy of the medieval original.

Hillfield Gardens is within walking distance of central Gloucester. Unfortunately there is no dedicated parking for the gardens. If coming by car your best bet is to look for a parking spot in one of the residential side streets off London Road. The garden is open at any time. 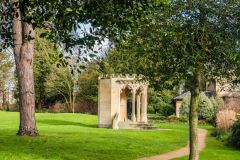 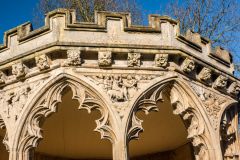 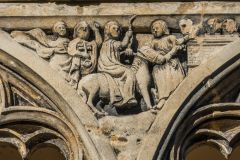 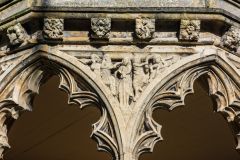 Nearest Accommodation to King's Board:

More self catering near King's Board

More Hotels near King's Board

More bed and breakfasts near King's Board