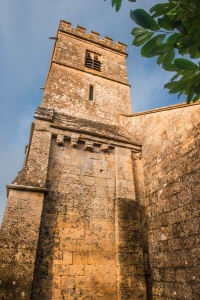 The village of Turkdean takes its name from a combination of 'Twrch', an ancient British term for boar, and 'dene', a Saxon word for a valley. So Turkdean means 'Valley of the Boar'. The Romans occupied this area of the Cotswolds, and the remains of a 3rd-century Roman villa has been uncovered not far from the attractive parish church of All Saints.

It was left to the Normans, however, to build a church here, on a sloping hillside. Robert d'Oligi fought with William the Conqueror at the Battle of Hastings, and after William's victory he was granted large estates in Buckinghamshire, Oxfordshire and Gloucestershire. Oligi (aka Doyley) built the first Norman church here, dedicated to St Mary. It was not until the 18th century that the church gained its current dedication to All Saints.

Around 1151 Ralpph Basset gave Turkdean to the monks of Osney Abbey. The abbey later purchased part of the manor holding and built a vicarage sometime before 1289. Osney Abbey held estates in Turkdean until the Dissolution of the Monasteries under Henry VIII. In 1542 the church was granted to Christ Church, Oxford, and the link to Christ Church stayed in place until 1964. 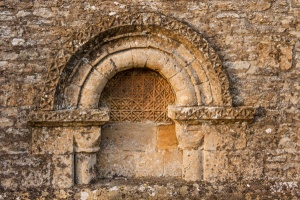 The prize piece of Romanesque carving, however, is a Norman round-headed arch and tympanum set into the south wall of the chancel. This lovely bit of 12th century carving seems marooned in the later wall, but it does drive home just how old the church is. The doorway has a diapered tympanum set between hoodmoulds with saltire crosses.

Other bits of Norman carvings were embedded in the west wall of the tower, where you can easily see a consecration cross and a stone carved with a diaper pattern. Inside the north porch is a Perpendicular doorway with very worn headstops depicting figures in 15th century dress.

The west tower was rather oddly built inside the west end of the Norman church when the church was rebuilt in the 15th century. You can clearly make out the earlier roof outline inside the nave. 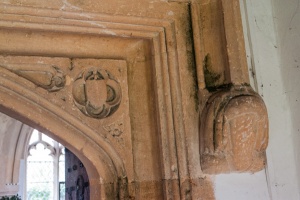 Inside, the most interesting feature is a very faded 14th-century wall painting on the south face of the nave arcade. This shows a large figure against a starry sky. Sadly, the painting suffered in recent years, and though it is clearly visible the colours have faded badly.

There is a later painting of Biblical text nearby, and a very faded 17th-century royal coat of arms over the chancel arch. The stone pulpit is 15th century one, though surely recut, for the carving is remarkably clean. in the south aisle is a very nice memorial window created in 1937 by Henry and Edward Payne.

All Saints is lovely church that seems to spring organically from its surroundings. The village of Turkdean is the perfect setting for the church; pretty in the way that only Cotswold villages seem to manage, remote and timeless.

All Saints is usually open daylight hours and is very close to the MacMillan Way long distance trail and not too far off the Oxfordshire Way, which makes it a good stop off point on a walking tour, which is how I found it! 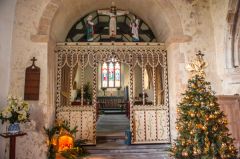 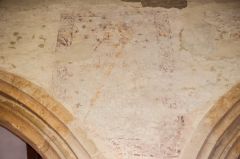 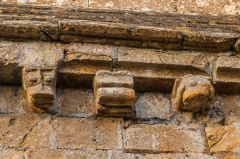 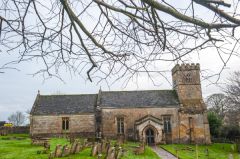 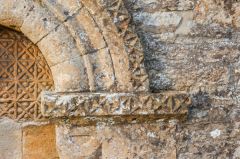 More self catering near Turkdean

More bed and breakfasts near Turkdean