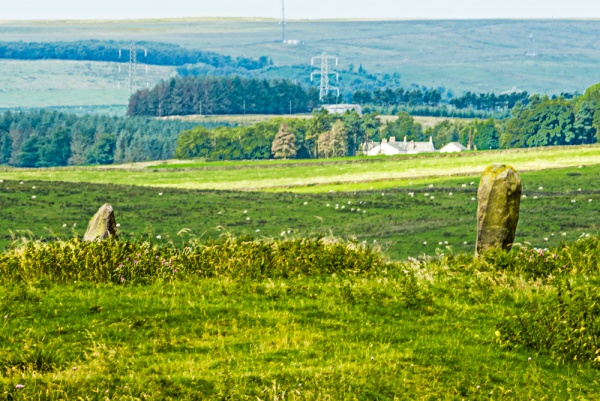 Literally within a stone's throw of Hadrian's Wall stand two stones, all that remains of a Bronze Age stone circle. The original circle was made up of 15 stones and stand on a low rise facing south away from the famous Roman wall.

Though only two stones remain, the socket holes that held the other stones upright are still intact below ground level.

The stone circle had a diameter of 6m (about 19 feet).

The larger of the two stones (the Mare) is oriented east-west and stands 1.5m high, and is about 0.85 x 0.4m at the rectangular base.

Historical records show that in 1770 there were three stones still standing. The stones are shown as 'The Three Stones' on Armstrong's map of Northumberland in 1769.

The third stone is thought to be the boulder lying about 6m west of the Mare. The stones were recorded by the Romans at the time of building nearby Chesters Roman Fort.

The Mare and Foal are very easy to spot from the Military Road (the B6318) between the 33rd and 34th milestones. The stones are just east of the access road to Cawfields reservoir and immediately beside the minor road north through Caw Gap to Melkridge Common. There is no parking place but it is easy enough to pull off the road and hop the fence if you want a closer look.

The stones are not impressive in and of themselves, but their location in the shadow of Hadrian's Wall is very atmospheric. To the best of my knowledge the stones (and the circle they were once a part of) have never been excavated.

More self catering near Mare and Foal Standing Stones

More bed and breakfasts near Mare and Foal Standing Stones

Self Catering near Haltwhistle