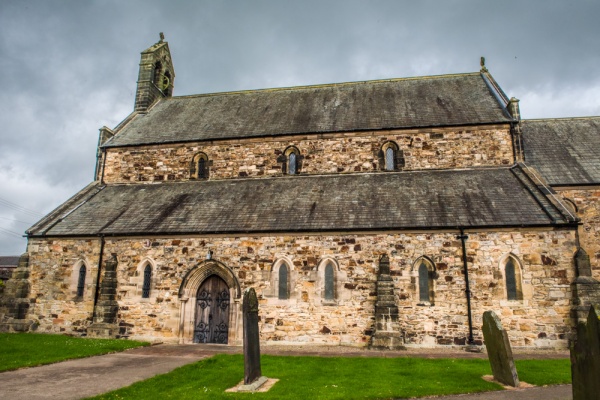 In the centre of Haltwhistle stands this largely 13th-century church, on a site that may have been in use since the 7th century. Unusually, the church was built in one go, and is an excellent example of Early English architecture, aided by a sensitive Victorian restoration. 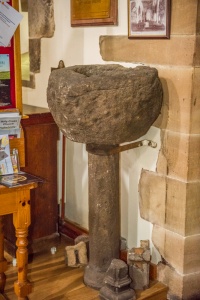 In AD 635 Oswald, the Christian King of Northumbria, defeated the armies of Cadwallon and Penda of Mercia at the Battle of Heavenfield. Oswald's victory was the signal for Celtic missionaries from Scotland to convert the north of England to Christianity. The first to arrive was St Aidan, sent from Iona.

Aidan probably preached in Haltwhistle, and may have founded a church here. The present 13th century church stands east of 'Eden's Lawn', thought to derive from the Celtic 'Llan Aidan', or Aidan's Church.

Aidan's contemporary was St Paulinus, who arrived around AD 625. Paulinus was an Italian missionary, accompanying AEthelburg, sister of the King of Kent, who came north to marry King Edwin of Northumbria.

Paulinus centred his missionary efforts in the area around Haltwhistle. He is said to have baptised King Edwin at Walltown, about 4 miles to the north-west, where you can still find a natural spring known as 'The King's Well'. An alternative legend says that the 'king' at King's Well was King Arthur. 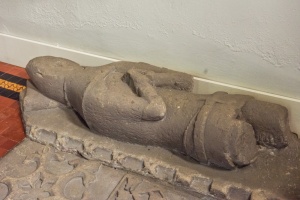 14th-century effigy of a Thirlwell knight

The oldest object in Holy Cross church is an ancient holy water stoup, a roughly carved bowl set atop a slender central pillar and looking like a crudely carved font. According to legend, this stoup was used as a baptismal font by Paulinus. It certainly looks the part, and since Paulinus was active in the area it is a plausible history. It has also been suggested that the stoup is adapted from a Roman altar. There are several examples of this sort of adaptation throughout northern England, so the story may be true.

The first written record of a church comes from AD 1178 when King William the Lion of Scotland granted land at Haltwhistle to his new foundation of Arboath Abbey. This grant of land was confirmed by Robert Bruce in 1299 and the Abbot of Arbroath hired a master builder to begin construction of a church shortly thereafter. The church is very similar in style to the church at Crail in Fife, built by Arbroath Abbey at the same time.

One unusual feature is that the nave and aisles are so wide compared to their length that together they almost form a square rather than the more common elongated rectangle.

The parishioners do not seem to have been lucky in their early vicars. In 1311 Robert Pykewell was seized by a party of Scottish raiders who then demanded a ransom. The parishioners told the Scots they could keep him. The Bishop of Durham had to step in and pay the ransom himself. Then in 1670 the incumbent Humphrey Dacres was relieved of his post for being a drunkard. 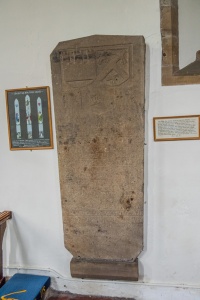 Historic highlights inside Holy Cross include a hexagonal 17th-century font carved with religious symbols including a Maltese Cross, a fleur-de-lis, and an intricate knot. in the sanctuary are two carved grave slabs commemorating members of the Thirwell family. The slabs are incised with three boars heads, the Thirlwell coat of arms.

The slabs were discovered in the south aisle, suggesting that the aisle was originally a family chapel. In the chancel is a lovely 13th century triple sedilia under trefoil arches. By the altar are a pair of 17th century Bishop's chairs.

Behind the altar is a stunning reredos carved from alabaster, depicting the Nativity and Old Testament characters.

The most interesting memorial is the Ridley Memorial Stone, standing upright against the south wall. It is dedicated to John Ridley, Lord of the Wallton (d. 1562). Ridley was the brother-in-law of the Protestant Bishop Nicholas Ridley, who was one of the three Oxford Martyrs burned at the stake under Queen Mary in 1555.

Holy Cross is very easy to find. It stands off Black Bull Lane, just behind the market place in the centre of Haltwhistle. The church is usually open daylight hours for visitors and there are very handy information sheets to get the most out of a visit. 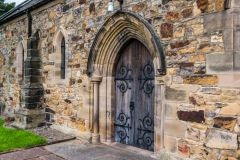 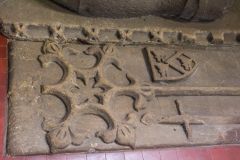 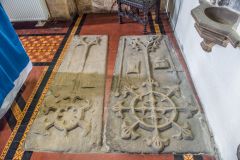 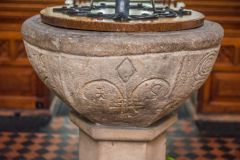 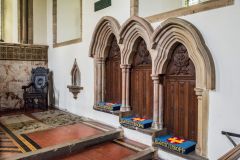