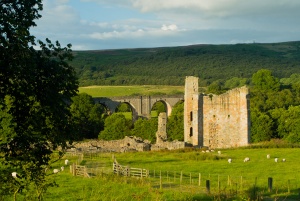 Edlingham takes its name from Thomas de Edlingham, who owned this rural manor in the late 13th century. In 1295 William de Felton, a soldier and royal official, purchased the manor from Sir Thomas. De Felton was probably responsible for building a hall house here beside an earlier Norman church.

Now both church and castle are overshadowed quite literally by a disused railway viaduct that seems to dominate the green valley floor, beside the slowly moving waters of Edlingham Burn.

The early hall house was further fortified and surrounded by a curtain wall by de Felton's descendants, possibly as a response to raids by the Scots. Remains of the buildings within the outer wall include the hall, solar tower, and gatehouse.

The hall is the earliest standing structure at Edlingham. This dates from the period 1295-1300. It almost certainly had vaulted cellars topped by a great hall, or living area. The hall was rectangular, with an octagonal turret at each corner. Only one of these turrets survives to any height, but it suggests a fairly modest building with aspirations of looking grand! 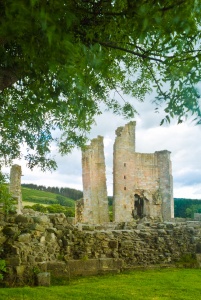 The tower is possibly the work of Sir Edmund Hastings, who inherited Edlingham in 1402. Historical records suggest that two families shared the castle, one in the tower and one occupying the hall.

In 1514 the Swineburn family bought Edlingham and lived here until 1630, but by the end of the Civil War period the castle was derelict, and by 1661 the buildings were being used as a source of building stone. The castle has been in state hands since 1975 and is cared for by English Heritage.

On the first floor of the ruined tower you can clearly see a finely carved fireplace, suggesting a solar, or private chamber for the lord and his family. You can see buttresses which were built to support the weight of an elaborate system of vaulting, but the vault eventually collapsed under its own weight and part of the tower came down with it. The remains stand to about 10 metres high (roughly 35 feet).

You can also make out a system of drains within the courtyard. The curtain wall is fragmentary and survives mainly as earth-covered mounds up to 1 metre high. The gatehouse is not in much better shape, but visible remains suggest that it had three arches, with a portcullis controlling entry through the central arch. 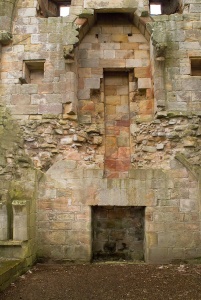 Vaulted cellars and
solar above

If you come to Edlingham please make time to visit the delightful church beside the castle. The architecture is simple, and the furnishings sparse, but it is a very attractive example of a small country church, with some very nicely carved Norman capitals and other architectural details. The church was open when I visited, and I suspect it always is; I can't imagine that vandalism would be an issue in this quiet rural location.

The castle is in the care of English Heritage, but there are no facilities on site. There is a small parking area, and the castle is open at any time.

If the very word 'castle' conjures up images of soaring battlements and fairy princesses in your mind then you will probably be disappointed in Edlingham. It is not so much a castle as a fortified house complex belonging to a moderately well-off gentry family.

It is interesting for what it is, not what it isn't! I found it fascinating, partly for the setting, which is wonderful, and for the combination of the church and castle, and also I was frankly amazed that the tower was still standing at all! 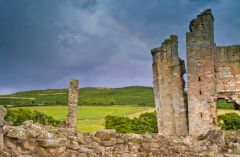 More self catering near

The Tavern - Steakhouse and Lodge - 4.8 miles
Alnwick, Northumberland
Stay from: £30.00

More bed and breakfasts near