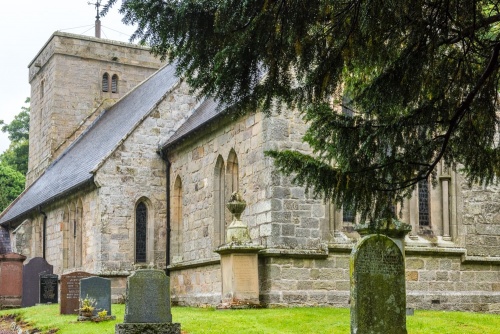 The village of Ingram lies in a superb setting in the Breamish Valley, on the edge of Northumberland National Park. On the south bank of the River Breamish stands the 12th-century parish church of St Michael and All Angels.

The tranquil setting is deceptive, for the church was badly damaged many times during the tumult of the Border Wars that raged in this area throughout the 14th-16th centuries. For example, during a Scottish raid in 1597 4 rolls of lead were stripped from the roof of Ingram Church.

The church was finally restored in 1879 but it retains many of its original medieval features.

A church probably stood here since before the Norman Conquest, but the oldest part of the present building is the base section of the tower, erected in the 12th century.

It is hard to imagine it when you see the church today but in the 13th century St Michael's was a very large and grand church with two chantry chapels, wide north and south aisles and a much larger chancel.

One of the 13th-century rectors responsible for enlarging the church was William de Montfort, the Dean of St Paul's Cathedral, who became rector in 1291. He was followed as rector by Walter Reginald, formerly the personal chaplain to Edward I and tutor to Edward II. 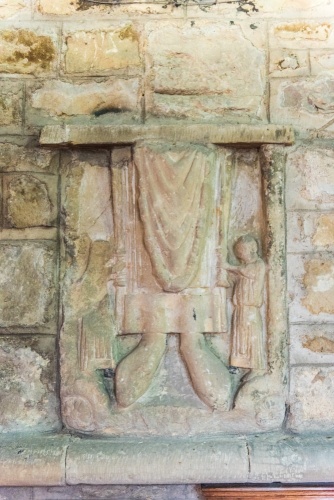 Medieval carving of a robed figure

The younger Edward must have held his former tutor in great regard for he made him godfather to his son, the future Edward III. Reginald went on to become Archbishop of Canterbury and Chancellor of England.

The future must have seemed bright for Ingram and its church but the turmoil of the Border Wars engulfed the area and even by 1663 St Michael's was described as 'ruinous and destitute'.

It was due to the efforts of three successive rectors from the Allgood family that St Michael's was saved, and by 1734 a visitor was able to describe the church as 'in pretty good order', though the parish itself was extremely poor.

Unfortunately, the poverty of the Breamish Valley meant that the inhabitants could not afford to keep the church in good repair. In 1792 they tore down the medieval south aisle, porch, and chantry chapel so they wouldn't have to be repaired.

The nave arches were filled in to serve as the outer walls and a few years later the steeple was removed. By 1870 the chancel had been reduced to just 8'6" long.

St Michael's must have been a dismal sight, but in 1876 fate took a hand and a family tragedy resulted in the church's salvation. Mrs Allgood, the wife of Rector James Allgood, was taking two of their young sons to a public school in the south of England when their train was involved in a tragic accident in Huntingdonshire. All three were killed, and the grieving Rector and his sister decided to restore the church in memory of their dead family members. 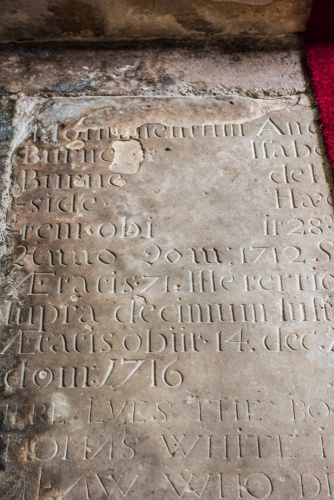 The most interesting historical feature inside the church is a broken fragment of a medieval carving, showing the lower half of a robed ecclesiastical figure with angels carrying candles at the foot of the robe. This memorial was originally part of the east chancel wall but was re-sited during the Victorian restoration.

One historical feature is easy to miss if you aren't looking for it. Partly hidden by the carpet in the chancel are two early 18th-century tablets. One commemorates Andrew and Isabella Burne of Hartside and the other commemorates the Moffat family of 'Ingraham'.

Look for a sundial carved into a pillar at the east end of the south aisle. Why would an interior pillar need a sundial? It would appear that the pillar was originally part of the outer wall and only 'moved' indoors when the aisle was added during the Victorian restoration. 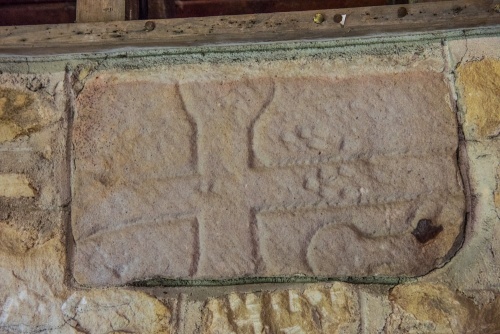 In the north aisle is the Vaughan Memorial Window, remembering Isabel Gibson Vaughan, daughter of Rector and Mrs ACC Vaughan.

On the vestry screen is a small brass plaque to the memory of Isobel Purves, who served for many years as the headmistress of Branton School. She was awarded an MBE for services to Rural Education.

St Michael's is very easy to reach. There is a public parking area just over the bridge as you enter Ingram. From the parking area, it is a few minutes' easy stroll to the church. Either take the riverside footpath east or if you prefer the road simply turn left at the junction. Either way brings you to the church in a matter of minutes. 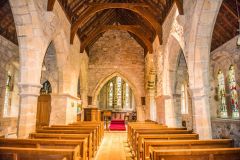 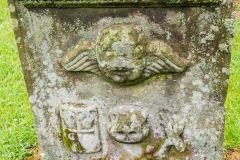 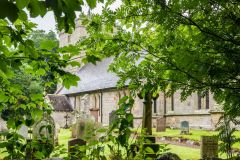