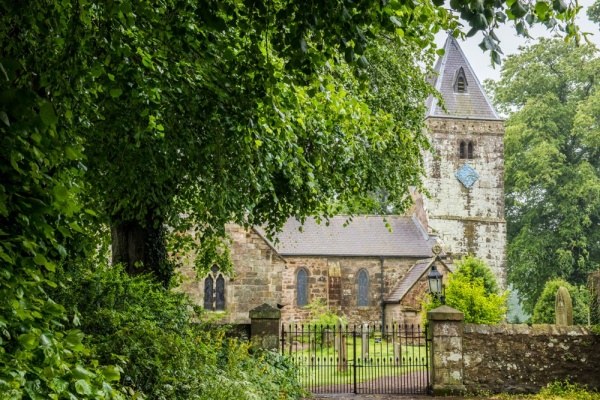 Sometime around AD 738, King Coelwulf of Northumbria founded a church at Eglingham. We can be fairly certain of the date because a document exists from that year recording the grant of Eglingham church to the monks of Lindisfarne Priory.

Nothing now remains of that 8th-century building and very little of the medieval church that replaced it. The medieval building was destroyed by the Scottish army under General Leslie during the conflict with Oliver Cromwell.

The tower and chancel date to the Early English period (roughly 13th century) and the tower has an upper chamber that was probably used as a place of refuge during times of trouble. The church guide uses more politically incorrect terminology and says that the chamber was 'used as a retreat for females of the village during Border frays'.

A small window in the east wall of the tower gave a view of the altar during services. It seems likely that this was used by bell-ringers to watch for appropriate moments to ring the church bells during services. 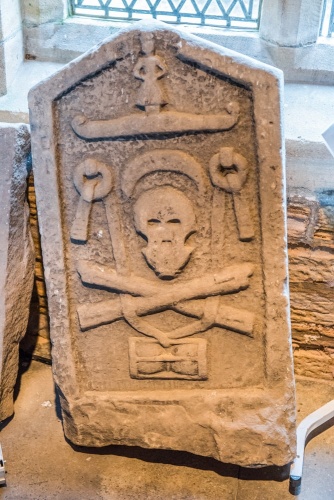 A 15th-century cross-slab in the porch

I said earlier that nothing remains of the pre-Norman church. That may not be true, for some historians suggest that the chancel arch predates the 13th-century building.

The upper stage of the tower has double lancets divided by a thick stone mullion, in the exact same style as the barbican of Alnwick Castle, suggesting that they were built at the same time and possibly by the same masons.

The tower holds two bells. One is dated 1489 and bears an inscription in German. It is thought to have been brought here from Old Bewick Chapel.

There is a south transept and a very odd mini-transept opposite on the north side of the nave. This is known as the Ogle Pew and may have been the private property of the Ogle family, lords of the manor, whose burial vault lies under the niche. On the floor of the ogle Pew is a grave slab bearing the arms of Mark Ogle, who fought at Flodden in 1513. 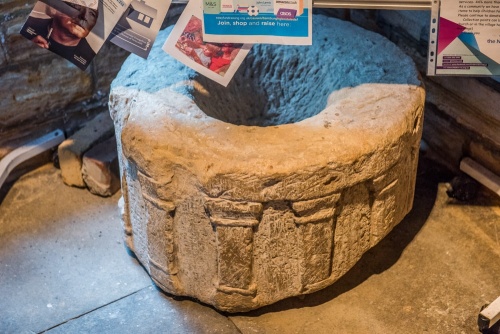 A medieval font bowl in the porch

Under the sanctuary is the Collingwood family vault, and hidden under the carpet is a memorial to Ralph Collingwood of East Ditchburn, who died in 1648, and his son Cuthbert (d 1687). Ralph was a direct ancestor of Lord Cuthbert Collingwood, a naval commander who was second in command to Admiral Nelson at the Battle of Trafalgar in 1805.

Most of the stained glass is modern. Perhaps the best glass is in the east window, designed by William Wales in 1908. Another interesting feature is the brass name plates that adorn the box pews.

Other historical highlights include the octagonal font, dated 1663. The font bears several mason's marks and is inscribed C.R. for Carolus Rex (Charles II).

On the wall is a brass plaque commemorating Captain John Carr-Ellison who fought in the Crimean War and later served as High Sheriff of Durham.

Eglingham church is normally open daylight hours and was open when we visited. 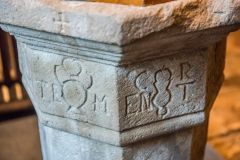 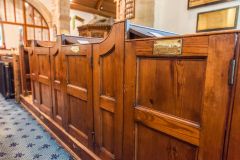 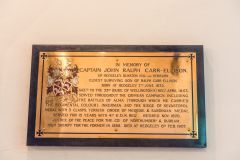 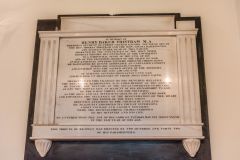 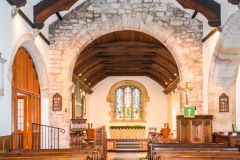 The Tavern - Steakhouse and Lodge - 6.3 miles
Alnwick, Northumberland
Stay from: £30.00