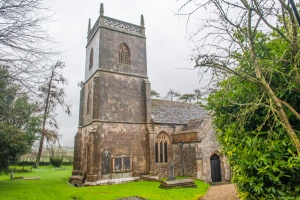 The isolated county church of St James stands beside a farmyard just east of Evercreech. The first church here was built in the 12th century, but the first record of vicar comes from 1313. The vicars were appointed by the canons of Bruton Abbey from the 12th century until the Dissolution of the Monasteries.

Appointments did not always go smoothly, however; in 1507 the candidate was rejected as being unsuitable for the post, and in 1554 the vicar was deposed for marrying.

The church is very simple; built of rubble dressed with harder ashlar, with a west tower, nave and north transept, chancel, south chapel and porch. Most of the current building is n 16th century style, with the exception of the tower, rebuilt using stone from Bruton Abbey in 1790.

Over the south door is a 14th century canopied niche. The figures are original, though recut in the Victorian period. They are thought to represent St James and the Virgin Mary. The most likely date of carving is around 1390.

There are two fonts; the current Victorian font is modern, but an older 18th-century font was retained and now stands in the south transept. 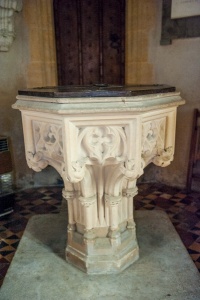 Among the most interesting memorials is a canopied urn to the memory of Susanna Strangeways (d. 1718). Strangeways and her husband Thomas are actually buried at Melbury, Dorset, but their daughter Elizabeth erected this monument as part of her duties as executrix of her mother's will. The inscription is fascinating; it tells us that Susanna was 'ye best of Wives, A tender & indulgent Mother, A sincere Friend, and to this Church and Parish a great Benefactor'.

Against the north wall of the chancel is a recess containing the effigy of a 14th-century priest. The effigy's face was recarved by vicar Sidney Selwyn in the 1860s. His efforts were not universally appreciated; the Somerset Archaeological and Natural History Society recorded its verdict as ''It is almost needless to say that, in spite of the ability which Mr Selwyn has displayed, he has committed a breach of taste, and has inflicted an injury on the cause of architectural study and criticism'. Not a ringing endorsement, then!

The effigy is not in its original position, which was on the north chancel wall. Selwyn apparently moved it during a restoration of the church in 1865. It is rather startling to see the Victorian face on the medieval body of the effigy. The figure is very large, at 6 feet two inches long, and the priest has a chalice in his hands. The feet and base of the slab have been cut away, and the effigy may originally have been used as a coffin-lid.

In a north transept window are small fragments of medieval coloured glass.

St James is a quiet country church. The setting is about as rural as you can get, beside a farmyard. The church is interesting mainly for the 14th-century effigy and the statue niche over the south doorway. 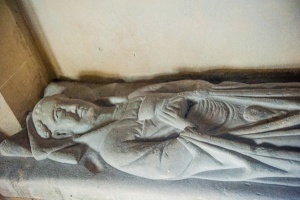 14th-century effigy of a priest 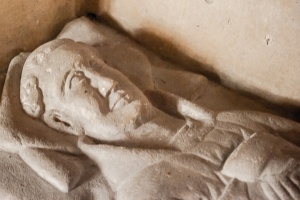 Recut face of the effigy 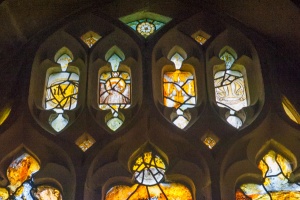 More self catering near Milton Clevedon